I love tiny California towns.  The smaller and weirder, the better.  For me, a big draw to moving to San Francisco was the new area to explore and towns to check out.  So when Zac suggested that we take a day trip to Fremont, I was on board.

Fremont itself is not a small town.  It’s actually quite a sizeable suburb, and the fourth most populous city in the bay area.  You have to cross the smelly Dumbarton Bridge, and driving through central Fremont you see many chain stores and churches.  This part is not too exciting, but if you keep driving there are greater things to come.  On the outskirts of town, bordered by the Union Pacific railroad, lies the Niles District.  Niles used to be its own town.  It is considered part of Fremont now, but still retains its small town feel.  It basically consists of a main drag with dozens of antique shops, an old fire station, the train station, a convenience store, bars, and the Niles Essanay Film Museum. 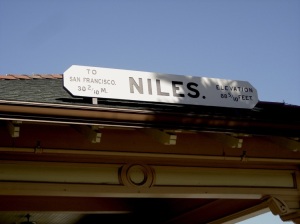 Those of you unfamiliar with me or film history are probably thinking “That sounds swell but. . . what’s so special about that?” Essanay Studios was one of the first film production companies, beginning in 1907 in Chicago.  Co-owner Gilbert M. Anderson also starred in many popular westerns as “Broncho Billy”, and so in 1912 moved part of the company out to Niles to get away from Chicago weather and shoot more westerns.  In 1914, Essanay managed to grab a notable up-and-comer from Keystone Studios: Charles Chaplin.

I have been obsessed with vintage and silent film since middle school and Charlie Chaplin is one of my favorite film makers or actors EVER.  So when I saw the name Essanay Studios, I got really excited!  Here we were in a middle of nowhere town where Chaplin had made some of his best short films.  He’d walked these very streets almost a hundred years ago.  It was the best surprise.

The museum is very small, mostly just photos and some bits of paraphernalia, since most of the buildings in use for the studios ended up being used for other things over the years.  Essanay was only in Niles for about 5 years, before moving down to Hollywood with the rest of the burgeoning film companies.  Most of the building is actually a screening room with the original projection booth.  In it the museum has screenings of silent films, many of which were actually shot in the surrounding areas.  We grabbed a calendar, and they have some good stuff coming up in a few weeks, including a Clara Bow film!  She’s another of my favorites.  We want to go back and catch them, but we’ll see what our schedules are like.  With me in retail and Zac in food service I’m amazed we both had Sunday off to go out there in the first place.

We bought some postcards from the gift shop and had a good time chatting with Mary Jane, the volunteer who was working there. She’s a costumer like me, and had some good tips on events and ways to find other like-minded folks.  We closed down the museum and shop, and promised to see her again at one of the screenings.

Despite being foggy and chilly in San Francisco, it was hot down in Fremont.  We lounged around Niles some more, enjoying a small park by the train station and the few antique shops that had not yet closed their doors for the day.  The Florence, a dive bar on the main drag, was the most happening spot in town, with biker dudes and chicks smoking and yelling and at least a dozen motorcycles parked outside.

We had seen all of Niles, but Fremont itself still had more for us, in the Centerville District.  Zac is very interested in the Middle East, particularly in Afghanistan, and Fremont is home to the largest concentration of Afghans in the United States.  The Centerville District is the focal point of this population, and is sometimes known as Little Kabul.  Off we went in search of it.

“Little Kabul” isn’t much, just a few shops, markets and restaurants, but it was fun and interesting.  We knew we were there when we spotted the Afghan Bazaar.  The bazaar is basically an upscale imports shop, with beautifully embroidered and embellished Afghan clothing and elaborate jewelery.  I love interesting textiles, so I enjoyed it.  They also have some scarves similar to the ones I got in Israel.   Zac talked to the kind-faced shopkeeper and bought a trinket with images of Mecca.  The shopkeeper told us of a market down the street so we headed there.

I always have fun in foreign markets.  I’m always curious to see the kinds of foods and packaging from other places.  Although there was a white couple who were leaving as we entered, once inside we were the only white people there.  I also noticed a few Indian people, another sizeable population in Fremont.  The market had many of the same products and brands I’ve seen at other middle eastern markets: every kind of olive or grape seed oil imaginable, dry beans and grains, rows of rose-water and pistachios.  One aisle was completely devoted to tea, much of it green tea, as Afghans apparently really like green tea.  The whole market smelled incredible due to a bakery in the back that specialized in huge pieces of hot, tasty naan bread.  We only got one piece, but the other shoppers were getting stacks of three or four.  We happily munched it as we went down the street, and still have plenty left in our pantry.  Yum!

Our excursion to Fremont complete, we headed back to San Francisco to catch the 8 pm showing of Moonrise Kingdom at the AMC downtown.  Before moving, I had gotten a bunch of AMC passes as gifts.  I had been itching to use a pair to see this movie.  Wes Anderson is one of my favorite modern directors, and Moonrise Kingdom exceeded even my high expectations.  If you haven’t yet seen it, do yourself a favor and go!  It was the perfect end to a lovely day of exploring new places.