G’day, readers!  I have some San Francisco adventures to relay, but they have not actually happened yet.  Sorry.  I’ve been doing a lot of working and socializing lately, not too much excitement to report over here.  In the next few weeks cool things will be happening, and so I’ll post about them after they have happened.  For now, the continuing adventures of my 19-year-old self in Australia.  Enjoy!

As usual, yesterday the day began much the same, with my sister Mel and I gorging on a big breakfast at the Hilton and stealing some to take back upstairs to our parents.  Then we walked down to the wharf to catch the ferry to Watson’s Bay.  I know I keep saying it, but public transportation in Sydney is so good – the ferries, buses, trains, and all (at 19 I had been growing up in a suburb of LA and had not really used public transportation besides a cheap local bus that wasn’t very good, so this was all new to me).  It was lovely weather, so picturesque, with all the sailboats on the water and lovely houses and condos on the shore.

Our family on the ferry

Watson’s Bay is a tiny, beachy town and utterly charming.  Where Hunter Valley was country cute, this was beachy cute (see the difference?).  At the advice of a friendly local, we walked up to a lookout called The Gap.  On one side stretched the short expanse of the town, on the other was cliffs, rocky beach and turbulent ocean.  This used to be the place where everyone went to commit suicide, apparently.

We had lunch at Doyle’s, a nice fish restaurant.  I don’t think I’ve ever had better prawns and chips.  However, Doyle’s reminded me of Beverly Hills, which I despise, in a few ways (at the time I wrote this I worked in a toy store in Beverly Hills, so I knew firsthand how much it sucked).  On one side of us, we had long tables of young, wealthy couples who were very yuppy-ish.  On the other side there were families with small children.  I don’t think children should be allowed in fine restaurants.

We took the ferry back, poked around some shops in The Rocks, and then went to do the Sydney Bridge Climb.  Yes, you read that correctly.  Since 1998, a company called Bridge Climb has let people climb up the Sydney Harbour Bridge.  It’s the ultimate in adventure tourism, something Australians are quite good at.  It’s adventurous because you get to climb a fucking bridge that stands 134 m high, yet touristy because it’s not that strenuous and you are tethered to a cable for safety.  Also, it’s a pretty famous bridge. 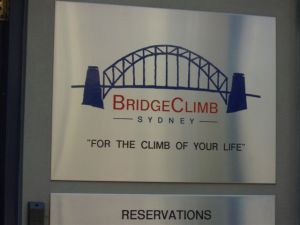 First we met Chrissy, who helped us through the bridge climb prep.  We had to sign a waiver, take an alcohol breath test, and then we were issued blue and grey suits.  I think the point of the bridge suit is so that we blend in with the bridge and the sky and don’t distract cars driving below.  We were in a group of 10, with 3 Brits and 3 other Americans.  I don’t know if it is the sort of thing that Aussies would do.  We had to take off all jewelry, and anything that could potentially come off.  We then met Leon, our adorable guide up the bridge.  He had quite an impressive white guy afro and appropriately resembled a lion.  We got on our harnesses with little latches that attached us to the cables, our sunglass tethers, hats and handkerchiefs (so that I wouldn’t look like a total idiot I abstained from wearing these).  We also had jackets in little pouches attached to our harnesses in case it got cold up on the bridge.  We passed through a bridge simulator so that we could practice hooking onto the safety cables.  Finally, we got radios and earphones so that we could hear Leon’s instructions and trivia about the bridge.  After all that, we were ready to climb!

I did very well on the climb considering that back in summer camp my experiences with heights on the ropes course did not go so well. Here’s a drawing of the Sydney Harbour Bridge:

In those big tower things on the end there are ladders to get to the top of the bridge, but we began on a narrow walkway just under the road, some of which was a wood plank and metal grating that you could see through.  Being under there, seeing the steel underpinnings of the bridge and hearing cars above me, this eloquent thought occurred to me: “This is fucked up.  This is not natural for people to be here, under a fucking bridge”.  But there we were.

The next step was to climb a series of fours ladders through the tower before ascending to the beginning of the arch.  This was pretty scary, actually.  The steps were also made of a mesh grating, so being able to see through them as I climbed higher and higher and higher scared the wiggens out of me.

Once we were on the bridge though, it was very cool.  The arch of the bridge is not a very steep grade, and I don’t have to tell you the view up there is spectacular!  You can see everything.  Leon chattered and gave us fun facts, and took many photos.  My dad later bought one of our family.  We got to the top of the arch, then turned around and went down the other side.  A cruise ship passed below us, and all the people on deck shouted and waved to us.  We waved back.  We didn’t shout, as we were a quiet, low energy bridge-climbing group.  I bet they get a lot more rowdy people up there.  It was an amazing experience. 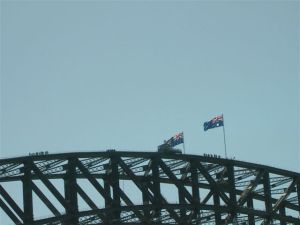 See those little dots? Those are teeny tiny groups of bridge climbers! We did that!

After we had climbed down, we returned our gear and took a cab back to the hotel.  My parents got some food from Woolworth’s for a picnic dinner en suite.  Mel and switched on the TV and found out Gerald Ford had died.  The rest of the evening we ate and then retired.  I’m quite tired myself just now, so the final leg of the journey will have to wait until tomorrow.