After all that good San Francisco stuff it’s time for me to finish chronicling the adventures of my 19-year-old self in Australia.  Thanks for sticking with me on this project, I hope you’ve been enjoying it!  I know the Oz stuff has not been the most exciting, since I was with my parents (sorry Parents!) and staying in posh hotels, but it was a good place to start.  It was the first diary that I kept of my travels as well as the first international traveling I did as an adult, so it really served to light the fire for me.  Stick with me, next up is Europe, and then we’re surely not in Kansas anymore!

(written somewhere between Australia and Los Angeles, above the Pacific Ocean)

This nearly 13 hour flight gives me plenty of time to catch up on the last couple of days in Sydney!  Thursday began much the same as the rest of our stay, with Mel and I going to breakfast at the hotel and stealing food from the buffet for later.  This routine would get dull were it not such a fine breakfast spread.  I’ve begun taking tea in the British way with milk and sugar in it.  I’m not sure why, as I usually prefer it straight and brisk.  But maybe some of the culture here has rubbed off on me, as Australian culture does bear resemblance to British.

Since it was a beautiful day, we headed down to the wharf to take the ferry to Manly Beach.  It seems that everyone else had the same idea.  Being the interlude between Boxing Day and New Years, both huge holidays in Sydney, I have a feeling that a lot of people did not go to work this week.  But the very nice Sydney ferry people gave us free water as we waited under the hot sun.  The ferry was huge and crowded.  I happened to sit next to a backpacker from Holland.  We made small talk, and he took pictures of the many sailboats as he tried to figure out which location in the harbor that he wanted to be at for the New Years Eve festivities, taking into account which places let you bring in your own beer and which made you buy it.  An important consideration for a backpacker.

Manly Beach was bigger than Watson’s Bay or Bondi Beach, and crowded as hell.  I’d bet that it was even more crowded than Bondi had been on Christmas, though the weather was better.  We lazed around, reading and napping and eating.  I’m going to miss these Australian beaches.  The sand is so powdery and white, the water dazzling shades of sapphire and aquamarine and clear, lovely green.  California beaches are crap in comparison.  Mel and I splashed in the water.  It was cool and pleasant.  My thighs were still sunburned from Christmas, so I wore jeans that I rolled at the knees, but then I burned the sides of my shins in a weird pattern from when I sat crossed-legged and reading.  I just can’t win. 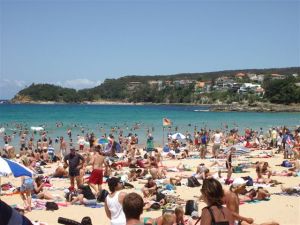 Back at the hotel, we all showered and put on our nice clothes, for that night we were going to have an early dinner and see a concert at the Opera House!  We took a taxi up to the Australian Hotel near the Rocks, a pub that specializes in gourmet pizzas.  They were amazing!  We all four split the Aussie sausage pizza and the king prawn pizza, both fabulous.  To wash it down I had Blue Tongue alcoholic ginger beer.  Pubs are kinda casual, so we felt a little out of place.  Luckily we were near a big group that was grabbing drinks after a day at the office, so their suits outdressed us.

We walked down to the Opera House.  Our seats were a box on house right.  I don’t think there is a bad seat in that ginormous concert hall.  The concert was called “What a Swell Party”, and was made up of tunes from musicals, movies, and just popular songs in general.  It was by the Australian Philharmonic Orchestra, which is an incredible group of musicians.  Their string section is particularly impressive.  There were also a number of guest vocalists.  One was a choir that wasn’t that great, a TV personality that was just ok, and a young opera singer who’d won a contest called Opera-tunity Australia.  The latter was amazing!  Although I did not see an opera show, it’s nice to be able to say I’ve heard opera at the Sydney Opera House.

There was also a jazz musician named James Morrison, who was PHENOMENAL!  He played trumpet, trombone, piano, and saxaphone to songs by Louis Armstrong and Duke Ellington, as well as a jazz version of “Wouldn’t it be Loverly?” from My Fair Lady.  I would never have imagined that song could be done that way.  All in all, it was an amazing and wonderful concert.  We ended the night with gelato, our evening indulgence.

Friday Mel and I slept in while our parents went to breakfast for a change.  As is usual with the last full day of any vacation, the day involved lots of running around doing anything else we wanted to do in Sydney, and dropping a lot of cash on things for other people.  We hopped on the monorail to Paddy’s Market, an indoor flea market near Chinatown.  It was mostly cheap crap sold by Chinese vendors, but I did find a cute zebra print swimsuit that was made in Australia.

Mel wanted to go to the Sydney Aquarium, so the two of us split from our parents for the rest of the afternoon and rode the monorail to Darling Harbour.  It was around midday when we got to the aquarium, and it was fucking mobbed.  Even though it meant backtracking, we decided to do some shopping and come back to the aquarium later. Large crowds of families and children suck.  So we hoofed it up to Pitt Street, Mel vexing me from dragging me around town and being indecisive about where she wanted to eat. We settled for the cheap goodness of Hungry Jack’s.

Feeling much better after a bite and resting my feet, we went next door to Rock Bottom Music, where they have CDs for $10 AUS (a mere $8 US!).  I bought David Bowie’s Greatest Hits and Mel got Guero by Beck.  We poked around the souvenier shops on George Street and were able to find some shot glasses for ourselves and miscellaneous things for other people.  At four we turned around and went back to the aquarium. 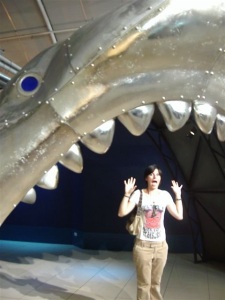 At the Sydney Aquarium

It was still crowded, though not as bad as before.  They have a great collection of sealife, all native to Australia, and are divided into sections by region, like the North Shore and Great Barrier Reef.  The seals were cute.  The platypus and penguins were mobbed.  I love the way people coo over penguins.  They were all napping, yet they were adorable.  A penguin could be taking a shit and everyone would go “awww”.   My favorite exhibit, though, was the Oceanarium.  That’s where you walk through a tunnel and the tank is built around you.  It’s so cool to walk through and see all the sharks and rays and schools of fish pass over you. 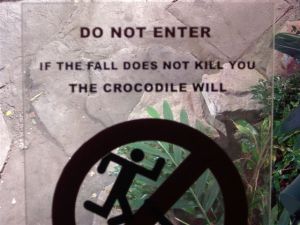 It started raining while we were there, so our walk back was a wet one.  For dinner we decided that since pub food was so good, we’d go to another.  I forgot the name of this pub, but it was in Circle Quay by the Wharf.  The fish and chips were excellent, as was the wine, a cabernet-shiraz blend that went down easily.  The busboy was so hot!  I’m going to miss these Aussie men.  We ended the night with (what else?) gelato!  The guy working there recognized us and said Mel and I looked like Claire Danes.  You know you have a problem when  . . .

This morning, Mel and I had our last breakfast at the Glass Brasserie, which was our last meal in Aussie-land.  Tears.  We all finished packing up, and went to the airport.  I could remark about the airport and flight, but I don’t think I will.  I’ll jot down some ending thoughts on Australia:

– Baked beans are good for breakfast

– Pub food is better and cheaper than restaurants

– Sydney is very clean (and lovely)

– Australia does great wine, beer, seafood, and, surprisingly, chocolate.  What more do you want?

– Aussies are very friendly.  They will only be stand-offish to you if you are stand-offish to them, for that is something they can’t stand.  They have an immense pride in themselves, their heritage, culture and country.  They also have quite a lot of fun slang.  I must try to use “How you going?” “Good onya!” and “Ta” in day to day life.

And that folks, concludes my adventures down under.  In general, I agree very much with what I wrote then.  It is a beautiful country with wonderful, friendly people and good eating and drinking.  Stay tuned, as bigger adventures were yet to come!  What were some of your first travel adventures?  I’d love to hear about them!

Dogs in my life: Clover and Archie. #dogsofinstagram
HAIM at the iconic Hollywood Bowl, and one helluva show. I only discovered their music in the last few years, but it was the right thing at the right time, and watching them live I was blown away by their musicality and genuineness. Thank you @haimtheband #hollywoodbowl #onemorehaimtour #summergirl
Milano Mule at Little Toni’s in NoHo. #laeats #itsfiveoclocksomewhere #campari
Chag Pesach sameach! Featuring my grandparents’ Seder plate. #pesach #passover #seder
Old tree near my parents’ new house. #california
Brunch with a view in Venice, CA. #adventureswithfriends #weekendbrunch #nikonf3 #highrooftoplounge