Although my birthday was over a month ago, Zac and I had not had a single full day off together until last Thursday.  I was told to dress warm and be prepared for tons of walking as we would spend most of the day exploring the city.  Mostly using the website atlasobscura.com, Zac found several landmarks and curiosities around San Francisco that neither of us had ever noticed before.  He gave me the best present for a travel writer:  a blog to write.  Armed with a map and printouts from the internet, as well as Zac’s smart phone for pictures, we discovered many incredible things that the average San Franciscan hasn’t heard of.

Atlas Obscura is an interesting website.  It is a collaborative project where people share hidden spots with others around the world.  According to their website, they believe:

1) There is something new under the sun, every day, all over the world.

2) Around the corner is something that will surprise the hell out of you.

3) Atlas Obscura is for people who believe in discovery.

That mission statement definitely applies to both Zac and myself.  I’m sure Atlas Obscura will continue to be a great resource for us!

Our first stop was in Golden Gate Park.  In a meadow near the Pioneer Cabin is a group of trees.  At first glance, they seem like nothing special, but once you find the rock with a small plaque on it you realize how cool they are.  Planted in 1896, the Arch of the Colonial Trees were planted by the Sequoia Chapter of the Daughters of the Revolution to commemorate the 13 colonies.  Each tree is native to the area it represents, and the soil they were planted with was from different famous revolutionary battlefields.  They were planted using a trowel that supposedly was used by Martha Washington at Mount Vernon.  Zac and I are not savvy on trees, so couldn’t identify which tree was for which colony.

Next, we headed to the modern monstrosity known as the De Young Museum for some free hidden art pieces.  Running from the path leading to the museum door is a continuous crack in the stone floor that twists and turns and runs up and down larger stones that serve as seats as well as art.  The stone was imported from Yorkshire, England, near where the artist Andy Goldsworthy grew up.  The crack was created with a sledgehammer and is supposed to remind one of the faultline on which San Francisco sits and the earthquakes.  It made me smile imagining this British artist meticulously sledgehammering the crack in the rock.

We got a little lost finding the next attraction of our tour, but around the southwest side of the De Young Museum is the Osher Sculpture Garden.  One can enter the garden without paying the expensive ticket price, and it is a pleasant little garden with the typical Miro and Moore sculptures.  At the far side of the garden is an interactive piece called Three Gems by James Turrell.  To get to it, you walk through a tunnel that leads you into a stupa below a grassy mound.  The space inside is circular and has a wide bench around the side, and an opening directly in the center of the domed ceiling.  It is a great space to sit and contemplate the sky, as well as make funny noises and hear the incredible acoustics of the space.  I’d love to go back at night sometime and watch the stars.  I hope these pictures and description do it justice; it’s a cool, interactive piece of art that most visitors pass right by.

After getting lost again (an easy thing to do in Golden Gate Park), we found the next item on our list: a few rings of old, moss-covered stones.  Known as the “Druid Circles”, the stones actually have a cooler history than just being the frolicking grounds of the many squirrels in the area.  They originally came from a 12th century monastery in Spain and were brought over by William Randolph Hearst to build a second mansion after his “castle” in San Simeon.  Once the Great Depression hit, Hearst was no longer in a hurry to construct such a manor, and the stones came to rest in Golden Gate Park.  Besides the ones in the Druid Circles, you can find similar ancient mossy stones just lying around the park.  As one could guess by the names, these circles are used in various practices of nature worship by the modern Druids.  When Zac and I found them, there were many flowers scattered around, and we wondered if they were there for some ceremonial purpose.  I always find William Randolph Hearst interesting.  He was so eccentric, a major art history buff, and ran with the studio system film crowd in the classic films I watch. 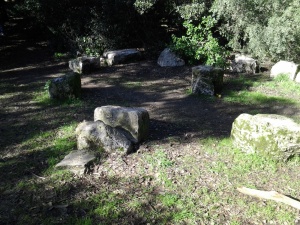 While I enjoyed everything we did that day, the next destination had to be one of my favorites.  I have always had a fascination with graveyards.  San Francisco has no graveyards, they dug them all up and moved them to Colma to make room for more houses in the 1930’s, but it does have a few columbarium for the remains of people that have been cremated.  Above Golden Gate Park, at the end of a quiet cul-de-sac lies the San Francisco Columbarium.  It is a stunning building from 1897 in impressive Neoclassical style, equipped with columns and a tall dome.  Inside, it has four floors lined from floor to ceiling with compartments housing remains of the dead.  The old ones usually have plain plaques with the name and date on them, many dating back to the turn of the century, but the newer ones from the 1990’s and beyond get really decked out.  Instead of a metal plaque, a glass plate lets one look inside myriads of tiny shrines to the dead.  Many house urns of ashes, but there are also pictures and mementos.  Some were so decorated they reminded me of how kids decorate their lockers in high school.  There were also recent flowers, cards, and offerings that had been put out during Christmas.  Zac and I spent a long time there, quietly and reverently poking around.  One thing that we noticed was the dates on the compartments were either really old or really new.  Later, we found that the Colombarium was abandoned from 1934 to 1979, so there are no graves from that period. 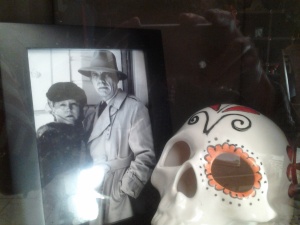 After what felt like hours, we dragged ourselves away from the quiet serenity of the Columbarium and hopped a bus heading for downtown where more sites awaited us.  At the corner of Market, Geary, and Kearny downtown stands a 24-foot iron sculpture known as Lotta’s Fountain.  It was given to the city in the 1870’s by the then-famous vaudeville performer Lotta Crabtree.  Lotta had gotten her start in San Francisco dancing on barrels in saloons during the Gold Rush.  Later, when the big earthquake of 1906 hit, the fountain survived and was one of the only things standing in the downtown area.  It became a meeting place for people to be reunited with their loved ones after that tragedy.  It is now San Francisco’s oldest surviving monument, but goes largely unnoticed.  It’s near a busy intersection, and when Zac and I visited it literally no one else glanced at it as they walked by.

Around the corner from Lotta’s Fountain, in a 9-story building built after the earthquake, is the Mechanic’s Institute Library.  It is the oldest library on the west coast as well as the oldest chess club in the United States, but you’ve probably never heard of it.  I hadn’t either.  The library collection was started in 1854 to aid the various vocational and technical classes taught by the Mechanic’s Institute.  We went up all nine floors on the elegant, vertigo-inspiring spiral staircase and snooped around the chess room where a bunch of old men where playing.  We also poked around one of the heavenly serene library rooms.  I love old buildings and this one lived up to my expectations. 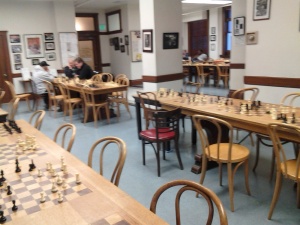 The downtown leg of our journey complete, we took a long walk up and over Nob Hill to go down to the water at Fisherman’s Wharf.  Along the way, we saw this marker at an alley: 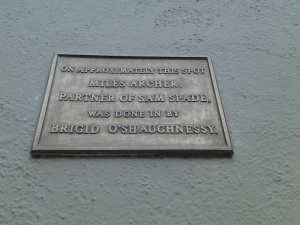 Once we reached the Wharf, it was crowded as hell.  This was only a few days after Christmas, so there were still plenty of tourists in town and people with time off from work.  So they all naturally decided to take all their freaking kids down to the Wharf, the most irritating place in San Francisco.  I was definitely apprehensive about going there; it is a place that I avoid if I can.  But our next stop certainly did not disappoint.  We visited a spot I’ve heard of often, but had not yet been: the Musee Mecanique.

The Musee Mecanique is truly a place of wonder.  It is the largest privately owned collection of mechanically operated musical instruments, games, and amusements.  It’s free to enter, but you use your own coins to operate the machines.  It was a nostalgic experience and we had fun running around and checking out the various amusements.  Some of them were what you’d expect, others quite strange and extraordinary. 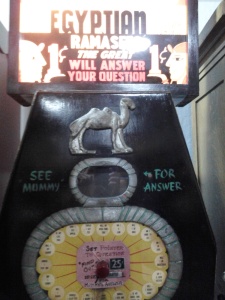 The last stop of our journey took us to Fort Mason in the Marina district.  Along a retaining wall in Fort Mason, without any signage or anything, is the stern of a huge ship with the word Galilee painted across the back of it.  It has a crude tin shelter over it, but that’s it.  The back of a ship against the wall, as if it somehow crashed there.  The Brigantine Galilee was built in 1891 in San Francisco and was a packing vessel that traveled between San Francisco and Tahiti.  In 1905 she began a second career as a ship for scientific research and exploration.  At some point she was also used for fishing before being beached in Sausalito and becoming part of the houseboat culture there.  When the Galilee was deemed unfit for habitation the stern portion was moved to Fort Mason in 1975.  Why?  I’m not sure, but it makes for a random and cool bit of San Francisco history.  This was the only thing we visited that we didn’t get a good picture of, as it was pretty dark by this time.  Zac did find this map showing where in the world the Galilee has been. 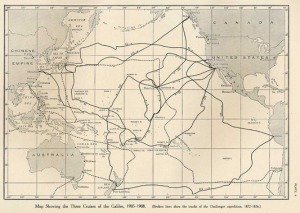 After marveling at the Galilee, all we had left was a stop at the Marina Safeway to grab some groceries for dinner.  Years ago, I read Christopher Moore’s book Bloodsucking Fiends.  A character works the night shift at the Marina Safeway and he and his buddies wax down the floor and have bowling tournaments using frozen turkeys and 2-liter soda bottles.  Maybe not the most highbrow, but a good book.  Read it.  It was satisfying to finally see the setting for this illustrious turkey bowling.

It is now New Year’s Day.  Zac and I have lived in San Francisco for exactly a year today.  It’s been a great ride so far, and I love that we are still taking full advantage of the opportunities for adventure and exploration.  Happy New Year!