Oh, dear readers, it’s good to be back.

Please excuse my prolonged blogging absence.  Life got away with me for a minute there.

While I was gone, I got a chance to get away for real.  Zac and I took our first big trip together since moving to San Francisco a year and a half ago.  The trip was almost a month ago now, and I’m just now sharing it with you.  Part of me is hanging my head in shame right now.

Anywho, we’d planned a big-ass, week-long road trip rambling through the Sierra Nevadas and beyond.  It was one of those whirlwind trips where it’s your first time in a new area so you see and do so much – and discover energy and vitality that you didn’t know you possessed.

The first day was a lot of driving.  We got up before dawn and left at 5:40 am, before the sun was up.  By 7 we had left the bay area completely behind and were in new territory.  We’d planned it so that the first day would take us farthest, and we’d get the biggest chunk of driving out of the way.  Our final destination for the day was Manzanar, a place that Zac has always wanted to visit.  We made plenty of stops throughout our drive, so it took all day to get there.

At around 9 am we reached the town of Jackson and got out and walked around.  A huge focus of the trip for me was to see historical/cheezy towns of the California Gold Rush.  Jackson was a perfect example, with many of the restaurants and hotels in continuous operation since they opened in the late 1800’s.  The only place open at this early hour was a gold mining store, selling everything for those folks still looking to strike it rich!  To complete the picture was a hanging mannequin of a miner from the sign and a few rednecks hanging around out front. 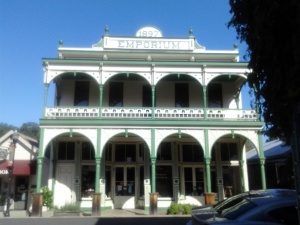 The old Emporium in Jackson

Not from the gold rush, but still fun – me with an old ice cream advertisement in Jackson

Soon after stopping in Jackson, the road morphed into a two-lane mountain highway.  These tiny highways both excite and terrify me.  I love the winding turns, the trees and beautiful scenery.  Most of all, I love passing through tiny mountain towns and communities, such as Strawberry (population 50) on our way on the I-108. 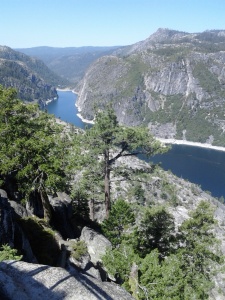 From a vista outlook during our drive

After perhaps an hour or so, we began to increase elevation quickly and started seeing some snow on the mountains although it was June!  First it appeared high on the peaks, but as we kept going it crept lower and lower on the mountainsides until it was just a short distance from us.

“It’s ‘snow’ close!  We have to play in it!” Zac said.  I obliged and pulled over for what I believed would be a brief frolic in the snow.  Little did we know that there was a rushing river barring our path to snow happiness.  This did little to dampen Zac’s spirits, but it still took a lot of effort for him to find a place shallow enough to cross for a brief frolic.  I did not go, but watched him with bated breath and visions of him swept away by the river.  Successful, he brought me back a heart-shaped snowball.  It was cold, wet and fresh.  I left it on a rock to melt away. 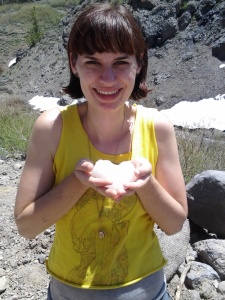 We got back in the car and on our way, and it wasn’t long before the road spat us out of the forest and into a valley on highway 395, a road we’d spend a lot of time on for the next few days.  Soon, we drove through another Gold Rush town, Bridgeport, a little larger and less quaint than Jackson but with plenty of character.  What made us pull over in Bridgeport was the court house.  It is an incredibly majestic building from the 1880’s with whitewashed walls and a spooky Victorian charm.  As you get closer to it you notice that there is something a little off about it.  Then you realize that the eaves of the building are filled to the brim with swallows’ nests.  The sky is likewise filled with swallows winging about, chirping and singing.  As a result, the courthouse, grounds, and a nearby police car are covered in swallow crap.  It was truly astounding how much poop there was. Around the back of the courthouse, we discovered the site of the old jail of Bridgeport, which is left wide open to the public as a mini-musuem.  You could go inside the cells and everything. 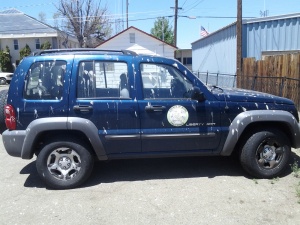 Did you know it was possible to have this much swallow poop on a cop car? I didn’t!

After a much longer stop than we’d anticipated, we realized that if we wanted to make it to Manzanar before they closed we could not stop anymore.  It was full throttle for the next couple hours, through hills and valleys with majestic mountains on either side.  At one point we picked up a really great radio station from Mammoth that was just our style.  They were playing bands like the Black Keys, The Dirty Projectors and Asteroids Galaxy Tour.  I haven’t really found any great radio stations in the Bay area, and wish I could somehow import this one out of Mammoth, complete with the local advertisements for boutiques and the Mexican restaurant with the happy hour specials.

Just past 4 pm, we reached Manzanar.  The scenery had changed drastically once we reached the Owens Valley that it is situated, and was much more flat and deserty.  The first thing that you notice when you get out of the car at Manzanar is the hot, dry wind.  It’s very dusty, and this constant dust and wind was one of the things that made life so unbearable for the Japanese internees here in the 1940’s.  For those who don’t know, Manzanar was one of the many deportation camps where the Japanese, many of them US-born and American citizens, were sent after the bombing of Pearl Harbor and the roundup that ensued.  For more information on Manzanar, here’s the wikipedia link.

The interpretive center closed at 4:30, so we didn’t have time to be as thorough as I usually like to be in museums.  I’m really glad we did get to visit it, however brief.  It is well put together, and the exhibits are use personal stories and artifacts to color the story of what happened there rather than just dates and numbers and facts.

After the center closed, we were aloud to walk around the grounds until dark.  There is a driving tour with a map that shows you various buildings and where they were.  Most of Manzanar was destroyed after 1945, and there is not much to see unless you know to look for it: crumbling foundations, spigots for plumbing, stone pathways.  The largest structures we saw were poured concrete beds for fountains and ponds created by the internees as a source of inspiration and anarchy.  I was struck by how large and desolate Manzanar is, but also by the spirit of the people who were there.  They lived in horrible conditions, yet they organized into communities, had jobs, held dances, built gardens, and invented countless ways to make life more bearable, more “normal”.  The only modern residents now are lizards and the jackrabbits we saw hopping around as dusk fell. 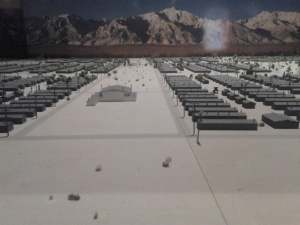 A model of what Manzanar used to look like. . . 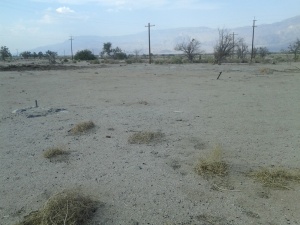 A mock barracks. The barracks had wooden frames and oil-cloth sides, so the wind and dust would go right through them. 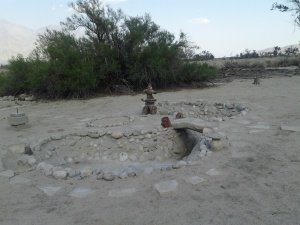 The cement and stone remains of a garden built by internees. The gardens became points of inspiration and meeting places, and on some occasions the sites of rebellions.

As the sun set we drove away from Manzanar north to Lee Vining, a small town next to Mono Lake.  Online I’d discovered that while camping is not allowed at Mono Lake itself, Lee Vining Canyon offers many affordable campsites.  I figured we’d just go down the road and see which one was best.  It took a little while, and we had a debate over Aspen Campground versus Big Bend Campground.  Our would-be neighbors at the former were having a raucous party complete with bad jazz music and drunken laughter (0n a Monday) and the latter was filled RVs.  Since Aspen Campground was a few dollars less (at only $14) we went back there.  We pitched our tent and fire in the dark, and had a hard-earned dinner of tofurkey sausages and beer.  We barely made it through s’mores before it was time to pass out in the tent.  The perfect way to end our first day on our trip, in the middle of the woods and far from home.