Weeks ago, Zac and I woke early in our hostel in Plovdiv, Bulgaria, to gather up our stuff and hoof it to the other side of town to take a bus to Veliko Tarnovo.  The bus station was old, bleak, and Communistic, with a bunch of depressed old people sitting around, waiting.  We made good use of our time by getting bus snacks and discovering the amazing Bulgarian coffee vending machines.  For the equivalent of 35 cents, a machine makes you an espresso in a plastic cup, stir stick included.  Surprisingly, the coffee is actually quite drinkable, and the fun is watching your coffee being made by the machine through the little window!  Cheap thrills, I know.  The bus ride to Veliko Tarnovo was beautiful, first passing through pretty countryside with the occasional village where you could see crops growing and tobacco leaves drying in people’s yards.  One of my favorite parts of taking the bus in Bulgaria was how rural it was.  Quite often the bus would get stuck behind a tractor or a horse-drawn cart with hay in the back.  As we rode along, the terrain changed to be more mountainous and foresty.

Veliko Tarnovo is a charming town nestled in a valley along a winding river, but the bus station we were dropped at was in the industrial side of town, and we had to take a city bus to the center.  The city buses in Bulgaria are interesting.  Each bus has an attendant, in this case a brusque, skinny, middle-aged woman.  She sweeps and mops the bus at rest stops, and when it is moving, she goes around to each passenger, asks them where they are going, and collects the appropriate amount of money for the ticket.  In our case, she also told us where to get off the bus since it was clear we had no idea!

One travel strategy I learned on this trip is that a good first stop in any new town is the Tourist Information Center, if for nothing else than to pick up a good city map.  They are also good at providing directions to your hostel if, like me, you forgot to look it up, and always have good brochures and sometimes can hook you up with good deals for travelers.  After getting a map and some info, we had lunch at the City Pub around the corner, and then set off to explore charming Veliko Tarnovo.  We soon found ourselves on a bridge crossing the Vlata river.  Most of the buildings in Veliko Tarnovo are cute and old, but there is one massive Communist monolith, the Veliko Tarnovo Hotel, right by the river.  It’s so ugly and out-of-place, but I was fascinated by it.  I love that contrast in Eastern Europe,  You constantly see these delightful, historic buildings next to these ugly, bleak structures from the Communist era.

Across the bridge we checked out the Assen monument, a tall column with men on horses at its base, representing the Assen brothers that helped liberate Veliko Tarnovo from its oppressors in the 1100’s.  Next to the monument was an art museum that happened to be free that day, so we spent an air-conditioned hour looking at Bulgarian art, most of it about the Assen brothers as well.  We also walked around a vast park on a hill on the edge of town with cobblestoned paths lined with tall grass and wildflowers.  Before too long, we headed back into town to meet Marin, our Couchsurfing host.

Marin was nice, but very quiet and a little awkward.  His apartment is a small studio apartment in a huge Communist block apartment on the outskirts of town.  These old block apartments were always designed with green spaces in between, so to get to Marin’s we had to go up many steps and follow a dirt path through the forest.  For dinner, he made us a traditional Bulgarian soup called tarator soup, which is eaten cold and made with yogurt, cucumber, dill, and garlic.  I loved it, it was so refreshing after a hot and humid day.  He also shared with us some homemade rakija, made by his father.  Rakija is something that I drank all over Eastern Europe, but the name and flavors varied slightly with the region.  It’s a little like brandy, and is usually distilled from fruits or herbs.  In Bulgaria, it is commonly made of grapes.  And it is always very strong, but I’ve definitely acquired a taste for it after drinking it in pretty much every country I visited.

The next day was our seventh anniversary (crazy, right?), and we celebrated with a lovely day of sight-seeing and hanging out in Bulgaria.  We had a bit of a lie-in and ambled into town, stopping for lunch at Ego, a restaurant that Marin had recommended.  It was a great recommendation, with sweeping views of the valley, river, cute little red-roofed houses, and the crazy Veliko Tarnovo Hotel.

After lunch we visited the big attraction in Veliko Tarnovo, the Tsarevets Fortress, a huge medieval fortress that helped defend the early Bulgarian kingdom against its foes.  There’s not much to see in terms of exhibits, and most of the signs posted are in Bulgarian, Russian, and German but not English, but we still had a good time rambling around and climbing on the ancient crumbling walls.  There was a tower on the highest point of the hill, and for a small fee you can ride the elevator and see the view.  Our elevator operator, Angel, was awesome.  He pointed out the different things we could see atop the tower, and told us some phrases in Bulgarian, but explained that Bulgarians are very lazy so they use “Merci” for thank you and “Ciao” for goodbye.  He also advised us to check out the church at the bottom of the tower, which was incredible.  There has always been a church on that spot, but in 1985 the dictator in Bulgaria had it renovated as a museum to be more secular, something which is still a bit of an issue for the Orthodox Bulgarians.  Inside the “church”, every inch of wall and ceiling is covered with stunning Neo-Realistic murals painted in dark, somber tones and telling the history of Bulgaria.  The style reminded me of El Greco, perhaps a bit of Carravaggio.  For Zac, these murals were one of his favorite things we saw in all of Bulgaria.

On our way out of the fortress, we had a bit of kitschy fun.  There was a model horse that you could sit on and the woman who worked there would drape armor on you and give you a helmet, sword, and shield and let you take pictures.  I posed while Zac took the pictures, and the woman was great, she got really into it and was directing him to the angles where he could get the best shots.  I have to admit though, all the armor was quite heavy, and I was worried about falling off the horse!  The resulting pictures are hilarious.  There was also an amazingly dinky animatronic puppet show about some legend about the fortress that didn’t quite make sense even though they played it for us in English.  There were even some surprise “effects”: a torch that lit on fire and water that shot out of the queen puppet’s neck for no reason.

Our visit to the fortress concluded, we got some ice cream and browsed around the town.  All over Eastern Europe I found delicious, handmade, gelato style ice cream, but for way cheaper than in Italy.  We found ourselves on a small, quiet street near the river when suddenly it began to rain.  We ducked into an ethnographic museum similar to the one we’d visited in Plovdiv.  It seems that these small museums showcasing the traditional folk crafts and industries of the region were quite common all over the Balkans.  What I liked about this particular museum was the photography collection on the upper floor.  Around the turn of the century, a photography studio had set up shop in Veliko Tarnovo, and the museum’s collection showed both posed photos from the studio and photographs taken from around town.

Before the sun set and we met up with our host, we stopped at a little hardware store.  The man in there did not speak much English but was very enthusiastic, and once Zac drew a picture of a lock and a bridge he knew exactly what we were after.  Lock in hand, we strolled down to the bridge, where Zac carved our initials on the back of it while I picked a prime spot in the center.  As the sun was about to go down, we snapped our lock on the bridge alongside dozens of others and together threw the key into the water.  It wasn’t Paris, where the bridges are heavy with the weight of locks from other declaring lovers, but to me it was more romantic for the uniqueness of the place.

That night Marin took us to a pizza restaurant that he liked.  I never expected to eat so much pizza in Eastern Europe!  It is everywhere, but the ingredients and flavors vary from region to region.  I ordered one with particularly crazy Bulgarian toppings: yellow and white cheese, ham, olives, corn, and pickles.  Yes, pickles.  It wasn’t as strange as it sounds, surprisingly, though I did try the weird Bulgarian custom of putting mayonnaise and ketchup on pizza.  I liked the mayonnaise, I’m a pretty big fan of mayo in general, but the ketchup was kind of sweet and weird.

The next morning was another early one for us, as we were leaving quaint little Veliko Tarnovo behind and taking the bus to Sofia, the capital of Bulgaria.  Sofia was probably my favorite destination in Bulgaria, and there’s a lot of stories coming up to prove it to you! 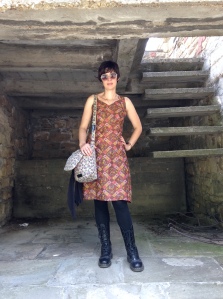