Jill and I woke up early in our hostel in Ljubljana to make our 6:35 train to Hungary, and realized that our dorm room was strangely empty.  Either everyone else had left even earlier than us, or not come back yet from the night’s activities.

We made the train easily, and spent a long day in transit. It was a lovely, uneventful time spent listening to music and staring out the window, save for a nerve-wracking hour in Zagreb when Jill got out for a stroll and I stayed on the train.  Without warning, it started to move away from the station!  Thankfully it was just changing engines, and we were reunited and continued on our way to Budapest.

We checked in at the Homemade Hostel (the cutest hostel in Budapest!), got some nightlife recommendations from the guy at check-in, then grabbed some doner kebap from the cheap Turkish restaurant across the street.  We also discovered Soprano, a fast-food ice cream joint that specializes in these ridiculously tall soft-serve cones.  Happily licking our ice cream confections, we strolled along Andrassy Utca, the main grand boulevard of Budapest, and crossed the Chain Bridge to the Buda side to watch the sunset. Up on Castle Hill, we sat on a low wall and watched the Danube river and the city get gradually bathed in golden light.  We made friends with Janet, a young student who’d broken away from her friends and was on her own, and so the 3 of us crossed back over the river to check out some watering holes for the night.

One of the best things about Budapest is the ruin pubs.  Imagine a huge Communist block building, like a hospital or school or even an apartment building, abandoned after the fall of Communism.  Now imagine that someone decided to turn this space into a pub, without actually changing the facade, but sticking in lots of random art and graffiti and mismatched furniture.  The resulting bar/hangout space/party labyrinth is a ruin pub.  If you want a good night with lots of ambiance and  neat places to explore and get lost in, I highly recommend Budapest’s ruin pubs.  As I do often while traveling, I found myself asking: why do we not have shit this cool in the US?

Our spot for the night was Szimpla, one of the best bars I’ve been to and one of the first ruin pubs in Budapest.  Inside is a main courtyard where folks chill and drink, but there are also tiny rooms to hide out in, weird art installations, and a hookah rental.  Most of the night was spent nursing beers and migrating from spot to spot, and talking with multiple British guys who were on stag holidays.  It turns out that Budapest is a popular destination for guy weekends in Europe!

The next morning we took a bus to Eger, a small town about 2 hours outside Budapest.  As we rode, the sprawling city melted away and the landscape gradually morphed into gentle rolling hills dotted with grapevines.  We had understood Eger to be small and quaint, but the surrounding suburbs were neither of those things, and not very scenic.  But once we were off the bus and ambling down a cobble-stoned alley towards the main square, it was clear that this was the charming Hungarian town we’d been looking for.

It was hard to see the square due to massive amounts of noisy construction.  While I was traveling, it seemed that I was running into construction everywhere. I would be a little frustrated and sad that I couldn’t see whatever it was I had come so far to see, but in reflection, I think the construction is actually a good thing, a sign that these tiny countries have the economy and tourism industries to put money and time into repairing these sites for future travelers.

We cut our losses and headed up the hill to Eger Castle.  The exhibits in the castle looked ho-hum, but luckily there was a ticket that excluded the exhibits and allowed us to explore the grounds.  It was very much the quintessential Medieval fortress, and an impressive one at that.  As every Hungarian school child knows, it was at Eger Castle that the people of Eger managed to defend the town against the Ottomans in 1552.  While visiting the castle, we also got a chance to do some archery at the archery demonstration!  I did very well, but Jill pointed out that the lighter, Ottoman-style bow probably helped.

After the castle, it was time for a big afternoon meal at a traditional Hungarian restaurant recommended by my Rick Steves guidebook.  It has a long, complicated Hungarian name, but locals just call it “HBH” for the brand of beer on tap.  It was truly a local’s choice, with a big bar, wooden paneling, modern polka music, and only Hungarians dining.  Eger seemed to be a popular tourist destination for Hungarians, and we saw many Hungarians vacationing there, but hardly any foreigners.  We split a huge crock of flavorful, mouth-watering goulash, with big chunks of tender beef, potatoes, and carrots.  We also had a specialty called “The Secret of Eger” that was quite unique and consisted of a pork tenderloin in a paprika sauce sandwiched in a thin potato pancake with some cucumbers and onions on the side.  I also loved the spicy paprika sauce on the table.  Paprika makes everything awesome.

In the late afternoon, we headed out of the old town, following signs to The Valley of the Sirens (or Valley of the Beautiful Women OR Valley of the Nice Women, depending on the sign).  Nearby, we’d rented a tiny 2-person cottage at the Tulipan Kemping campground for the evening.  It was absolutely adorable, and cheaper than some of our hostels.  We sat and read on the little porch and watched our old French neighbors bustle about their camper, then around 6 ambled down into the valley.  The Valley of the Sirens is known for its local wine caves, all located in a ring around a central park and owned and operated by local families.  The caves all have little store fronts with benches to sit and sip your wine, and vary in levels of fanciness, from a costumed troupe of musicians strumming romantic tunes to an old-timer in a dirty plastic chair guarding his dim cave.  On a Saturday night, it was bumping with visitors from all over Hungary.  We were not quite sure how the wine tasting was supposed to work, but we went to a few places, asked for some tastes, and then would each select a glass to nurse on the benches and watch the world go by.  I don’t know how many travelers make it out to little Eger, but I highly recommend it, especially if you love wine like I do.  The wine was smooth and mellow, cheap ($1-$5), and low in sulfites, as neither of us got headaches or the least bit hungover.  After several hours tasting, we passed out pretty soon after getting back to our cabin.

After Eger, there were just 3 days left of my epic trip.  In travel time however, 3 days is a lifetime, and there would be plenty of new, adventurous, and kick-ass things to come. . . 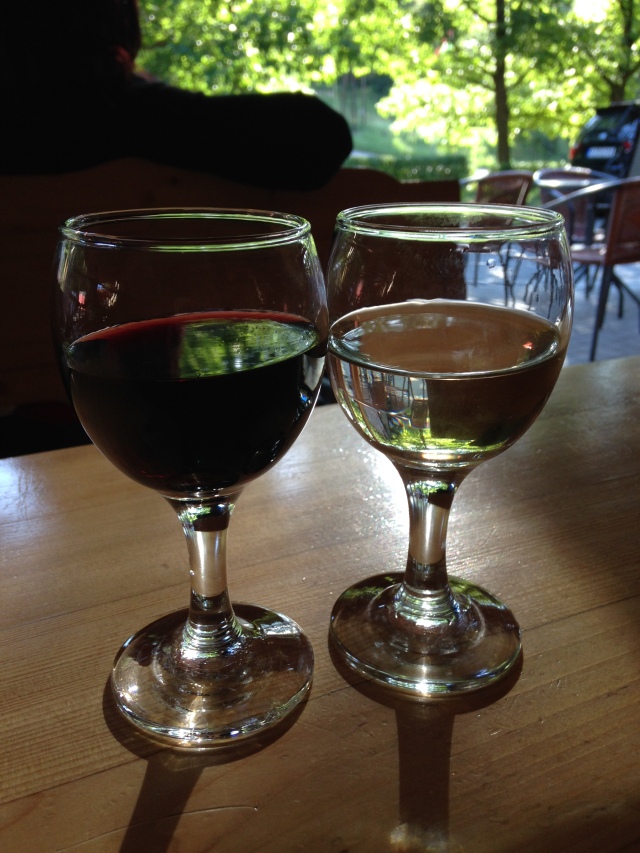