We have been in Izmir, Turkey, for exactly one week. I have so much to say, so many thoughts running through my head constantly, but I think the biggest surprise has been how comfortable I feel here. True, there is a language barrier, and everything looks and smells and sounds different, but being in a foreign country comes naturally to me. This is probably also helped by the fact that we have not done that much sightseeing or tourist stuff. Actually moving here has forced us to do more mundane yet exciting things like getting a Turkish cell phone and apartment (more on that to come!). But to tell you about Izmir, I should start at the beginning. . .

We touched down in Izmir around midday on New Year’s Eve, a day later than planned due to snow in Istanbul but with still enough time to ring in the new year. From the airport, we bought our Izmir Karts and took our first ride on Izban metro, one of the two metro lines throughout Izmir. The transportation system for Izmir is the same as in San Francisco. You buy a re-loadable card that you put money on and you just tap it to use it on any method of transportation, including bus, metro, and ferry. Each ride costs 2,40TL and is good for 90 minutes, including transfers.

Same as in San Francisco, except a hell of a lot cheaper and faster. The trains are squeaky clean with convenient luggage racks, which were great since we were coming from the airport with everything we own on us. If such luggage racks were to exist on the Muni or Bart in San Francisco, they would immediately be filled with trash, but not in Izmir. Some of the views out the metro window on our ride showed poor neighborhoods with crumbling buildings and trash in the roads, but Izmir is a lot safer than San Francisco and doesn’t have it’s drug or homelessness problem.

We got off the metro in Karşiyaka, the neighborhood where we would be meeting our Couchsurfing host, Mustafa, and went in search of a cafe with WiFi. We got a little lost walking around, but a nice young woman saw us with our map out and gave us directions. I have been astounded by the level of generosity shown by Turks in Izmir. We are never at a loss for people helping us. She recommended we try the local Starbucks, so off we went. I really like Karşiyaka. It’s an older neighborhood, but vibrant, with tree-lined boulevards, and lots of people doing their business at the shops, markets, and cafes. We found the Starbucks, and sat down for a much-needed coffee and WiFi connection.

Mustafa kindly picked us up there and we packed into his car and met Elena and Alex, two Ukrainians who were also staying with Mustafa for a few days. The have been volunteering in Gazientep, a town near the Syrian border, and were taking a holiday to hitch-hike and travel around Turkey. The five of us immediately got along well, and had a great time talking and exchanging ideas over the next few days.

Mustafa’s flat is in a nice high-rise building and is quite cozy. When coming into a Turkish household, it is customary to remove your shoes right away, and he provided Elena and I with some cute guest slippers to wear during our time. We met his cat Melo, who is very friendly, and one of the noisiest cats I’ve ever met. He never stops meowing! Mustafa made some çay, traditional Turkish black tea, and we talked for a bit before taking a nap. We needed one if we were going to make it through New Year’s Eve! 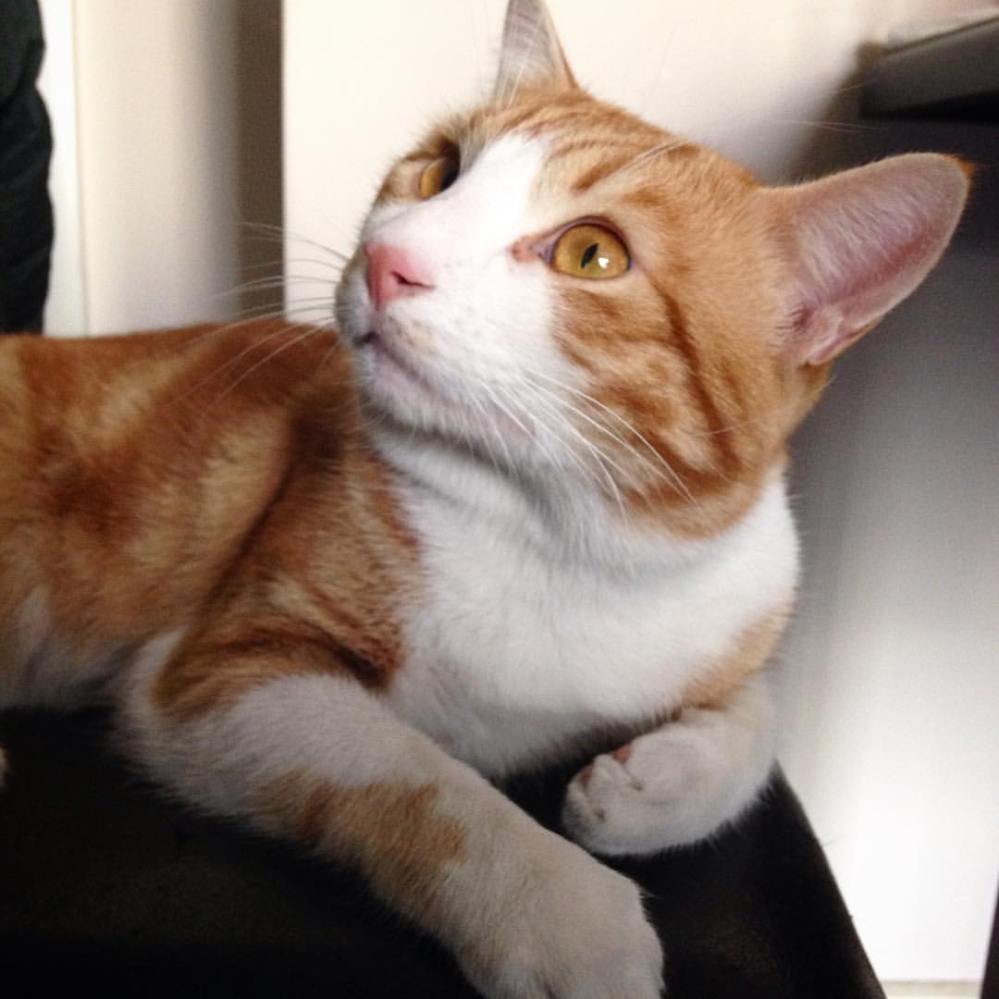 That night was the perfect welcome to Turkey. Mustafa made a delicious meal of spicy pasta, soup, and salad, and afterward we packed into his car to pick up a friend of his. I don’t remember her name, but Mustafa’s friend is a spunky nurse with short hair and tons of energy who spoke almost no English, but we had a great time with her.

Our group on the streets in Alsancak. Photo courtesy of Mustafa Bulat

We went to Alsancak, the happening downtown area to a street with lots of bars and clubs, and it was packed! The street was filled with shoulder-to-shoulder pedestrian traffic of young Turks looking for a spot to ring in the new year. All of the trendy places were charging an entrance fee, so we ducked down a side-street that was much calmer and found Varuna Gezgin, a really fun bar with books, magazines, and knick-knacks from all over the world lining it’s walls and a young staff partying as hard as the guests. We got some beers and just hung out and listened to the music that was playing, the nurse pulling me out of my seat several times to dance with her.

It was around 1 or 2 when we went back to Mustafa’s place, but the night was not over. We had some raki, a traditional Turkish aniseed liquor that you mix with water to create a milky brew. Drinking raki is a full activity, and should be accompanied with food and lingering conversation. Mustafa put out some cheese and another of his friends stopped by, who gave me the best compliment I’ve received in Turkey. At some point during the conversation, he stopped and told me “You look like a Turkish girl, but you sound like CNN!”

We finally dragged ourselves to bed at 4 and had a good, long sleep in Mustafa’s spare bedroom. When we finally got up late in the morning, delicious smells were wafting from the kitchen. Mustafa was making breakfast. Traditonal Turkish breakfast is an event where every inch of the table is covered in different dishes, and this one included fried potatoes, eggplant, and peppers, eggs, cheese, cucumber and tomato salad, arugla with lemon, bread with three kinds of jam, butter, honeycomb, olives, çay, and freshly squeezed fruit juice. It was heavenly! 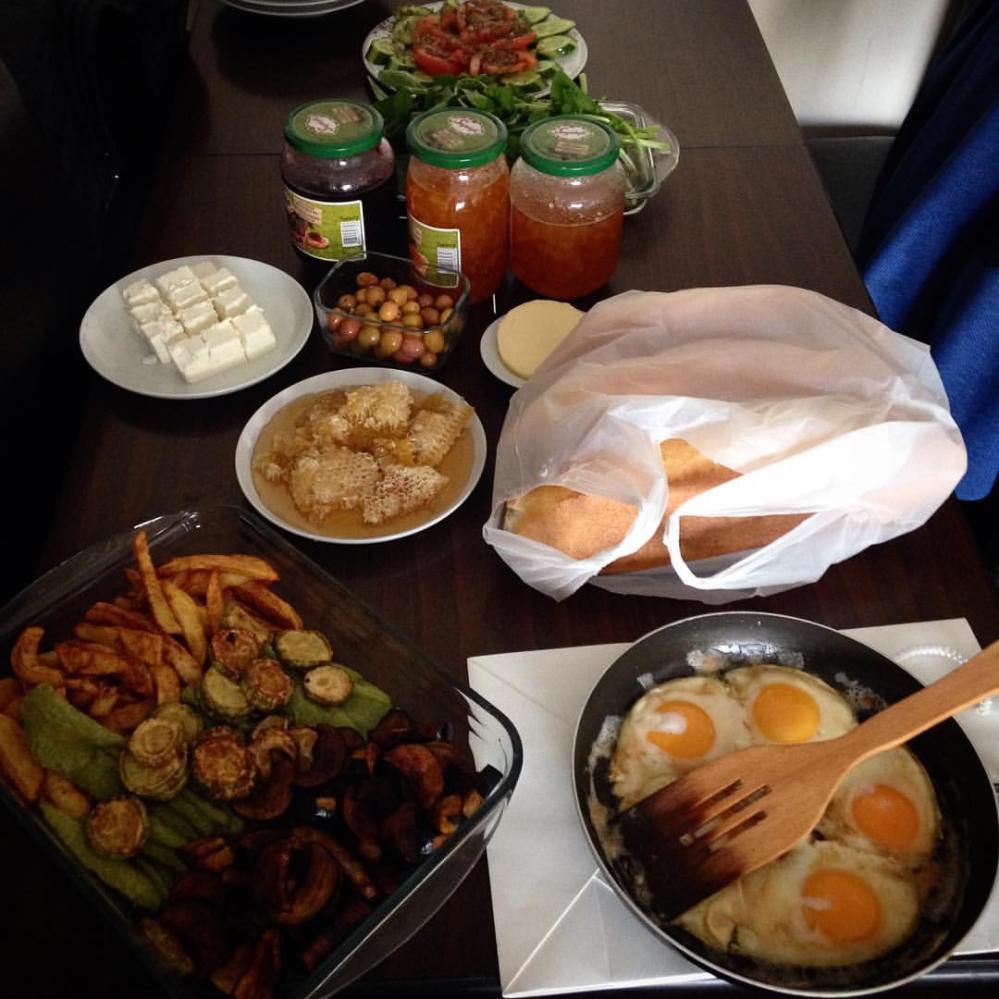 That afternoon we did a bit of sight-seeing. First we went to Asansör, a tall tower in the older Konak neighborhood with an excellent view. It’s touristy for the area, and a famous old song about Izmir by Dario Moreno, a Turkish singer, plays on the speaker in the elevator ride up. Once out of the elevator, you are treated to sweeping views of the Mediterranean and the city of Izmir. It was crazy to look out on it all and realize that this paradise was in fact the city where I am going to be living and working. 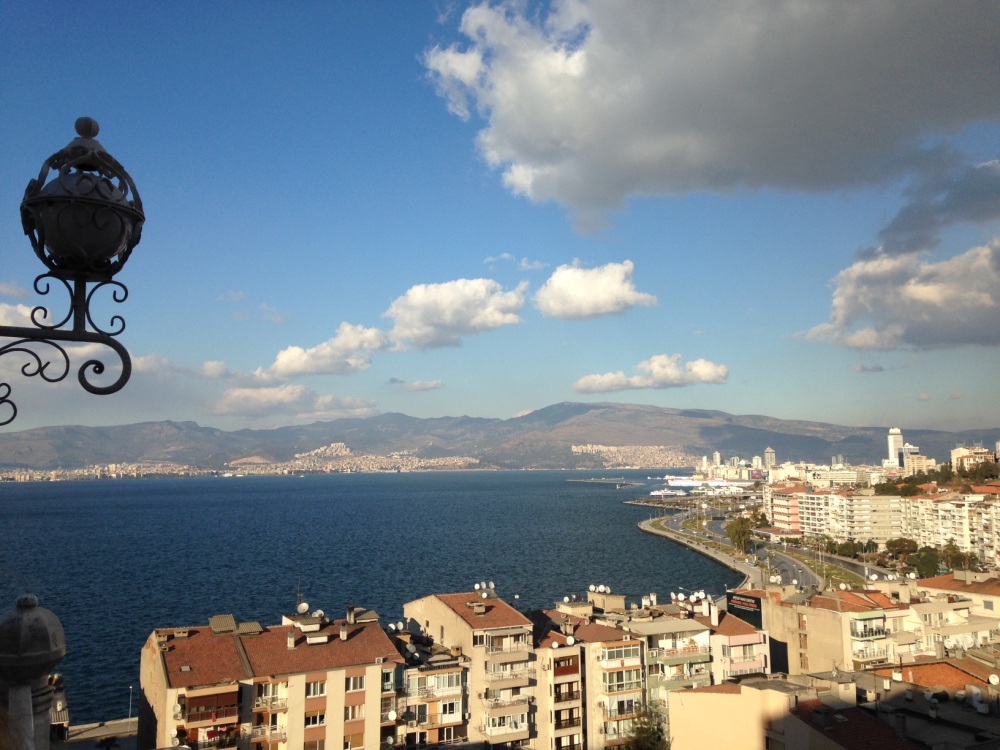 It was a cold, windy day, so our next stop was Kemeraltı, an amazing bazaar street, in search of Turkish coffee. We found a tiny hole in the wall with low Ottoman-style tables and had our first Turkish coffees in Izmir. I acquired a taste for Turkish coffee when I was traveling throughout Eastern Europe last year, and it was good to be reunited with the silty, potent beverage. We also had a fabulous time walking the windy streets of Kemeraltı, and need to go back there. Turkish fashion is great, lots of clean styles with interesting details, and the prices of the stalls there are very cheap. 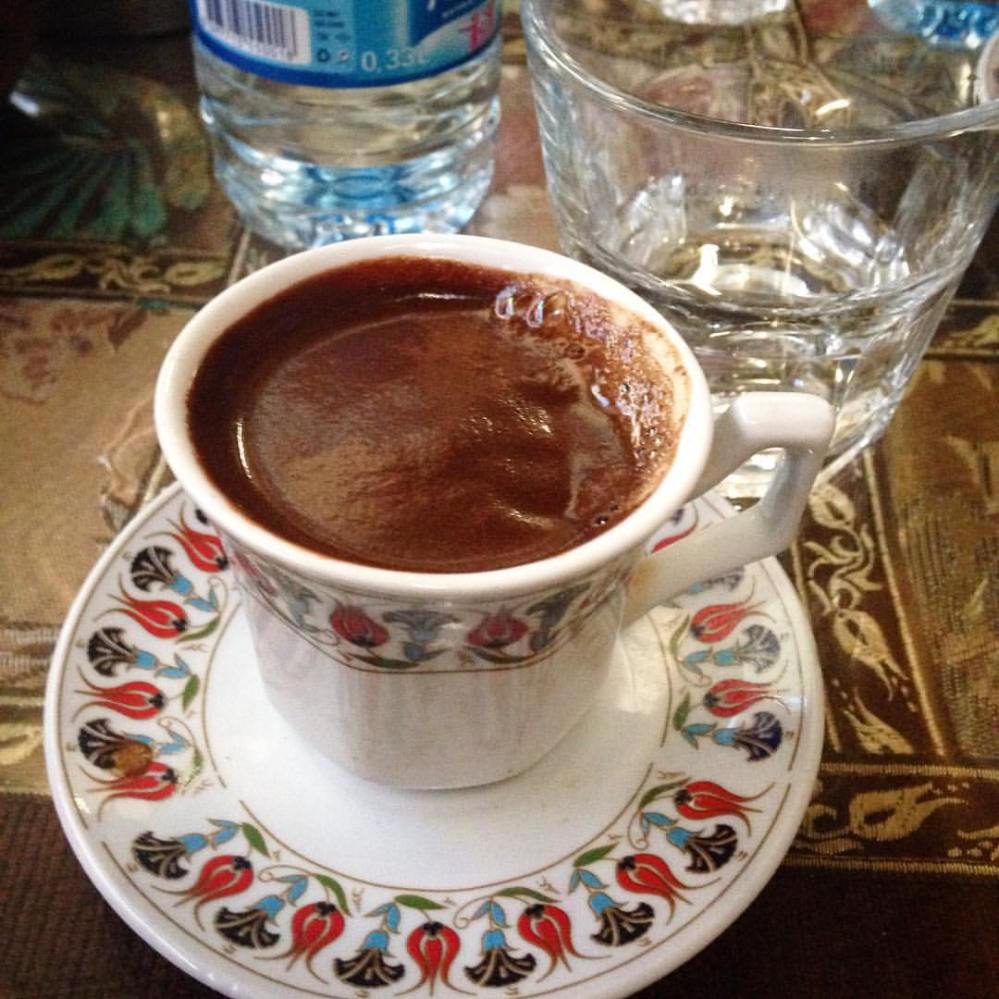 Turkish coffee. You are supposed to drink water before the coffee so that your mouth is clean and you can taste it properly.

From there we walked to the Saat Kulesi, the clock tower that is one of the most famous and photographed sights in Izmir. The clock tower is a beautiful, Ottoman-style structure, but it’s origins are multi-cultural. It was built in 1901 by the Levantine French architect Raymond Charles Pere to commemorate the 25th year of Sultan Abdüllhamid II’s reign, and was commissioned by the German Emperor Wilhelm II. Zac and I have noticed a strong German-Turkish connection, and this seems to be part of that. The clock tower is located right on the waterfront and is quite picturesque. However, it was freezing, so after taking some pictures Mustafa suggested more tea.

The famous clock tower of Izmir 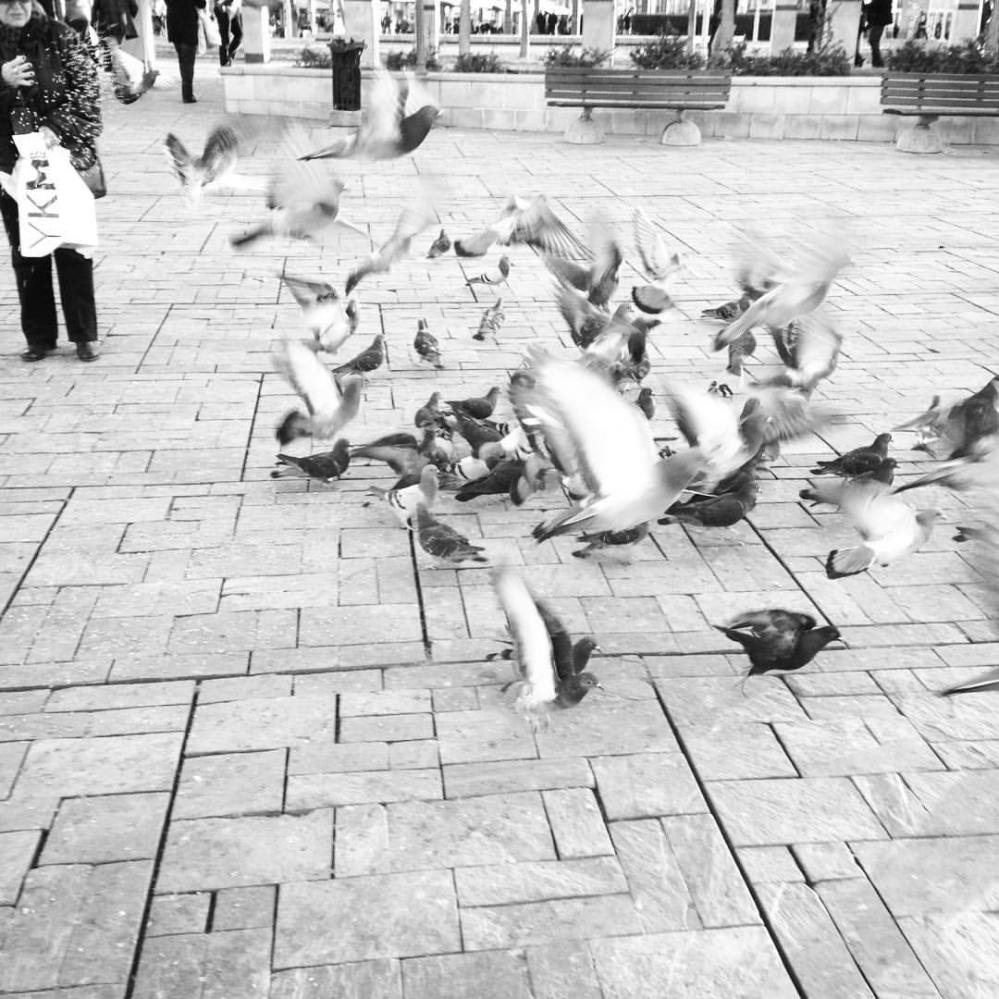 Tea in Turkey is drunk several times a day, so this was not an abnormal idea. We went to Khave Deryasi, a chain coffee and tea shop that is everywhere in Turkey and has a large menu. It is in a Khave Deryasi that I am writing this post! They have reliable WiFi and delicious fruit teas. On New Year’s Day when we visited with Mustafa, Alex, and Elena, Elena recommended the elma çay (apple tea), as she’d had it in other parts of Turkey and was passionate about it.

On the way back to Mustafa’s flat, we stopped at Kipa, a huge grocery store, to get some food for dinner. I love visiting grocery stores and markets when I’m abroad. I like to see the varieties of food products available, compare prices to what’s back home, and just check things out. Usually I do this to get an idea of how local people live, but this time my research was for myself and my new life here. We bought some fresh fish, bread, and vegetables and returned home. 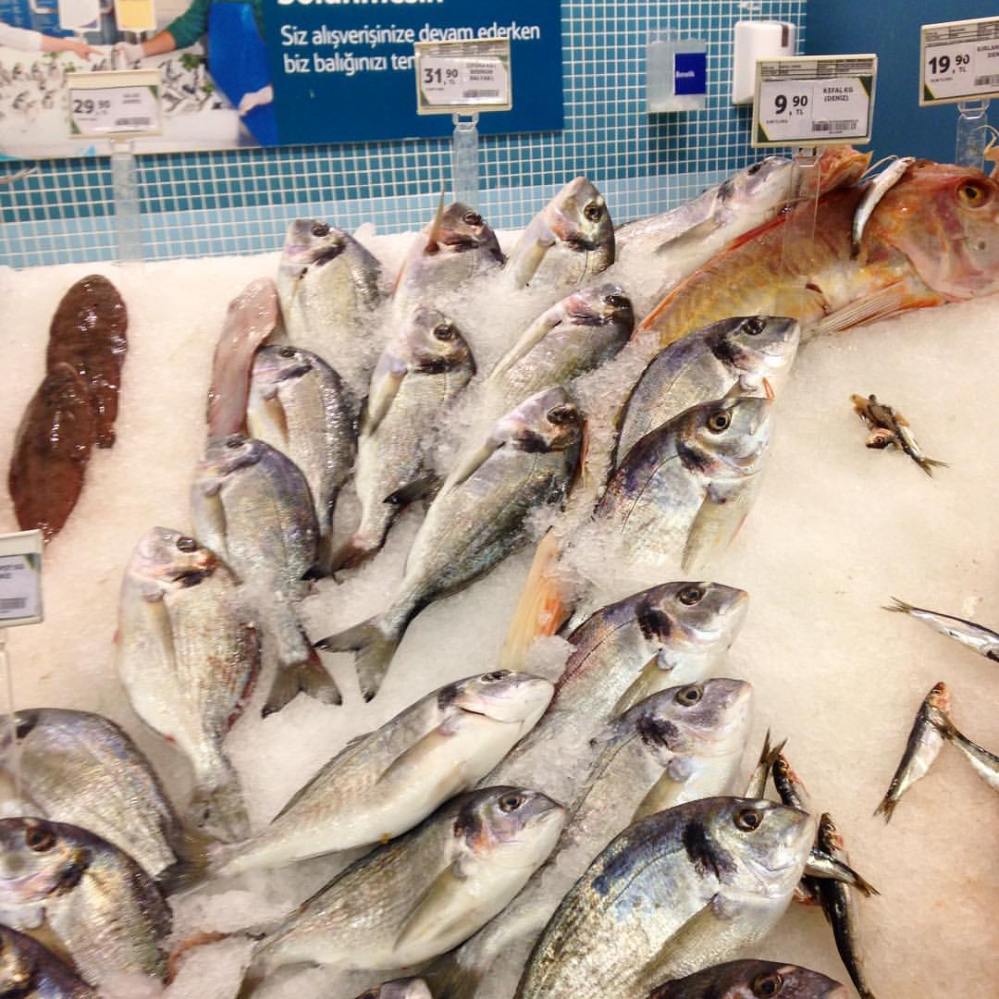 That night I helped Mustafa prepare the fish for dinner. I’d never cooked a whole fish before, and was eager to learn! I peeled and chopped vegetables and watched him scale the fish and extract the gross things from inside, some of which he gave to Melo. We then laid the fish on foil, stuffed the insides with garlic, and covered it in vegetables. After a drizzle of olive oil and a good shake of salt and fish seasoning, we wrapped it in more foil and stuck it in the oven. It was amazing. This is why I Couchsurf, to be able to learn new things from people around the world. Accompanied by a salad of fresh vegetables and local Turkish wine, it was the perfect finishing touch to the first day in our new city. I cannot wait to see what’s next!