After the final day of our rigorous CELTA program, our group would be breaking up. Darek was flying back to his family in Kazakhstan the next day, and Şefıka would be driving down the coast to her hometown of Fethiye. Saloua was to stay in town until her tourist visa ran out and then she would return to Morrocco, and Asya, the Izmir native would still be around. So to commemorate this bittersweet occasion we needed a Big Night Out.

Some of my favorite memories while traveling are of Big Nights Out. You know the ones. The kind of nights that take you all over town, visiting various locations and seeing the microcosm of life that occurs in a place. Deep conversation is always involved, new friendships are formed, and dancing can occur. There was even one memorable Big Night Out in Dublin where a park was snuck into. And alcohol is almost always involved.

The best kinds of these nights are when your group of foreigners has an insider, a local guide who can show you their favorite places and really make the occasion special. Fortunately, we had such a guide, as Asya had a collection of wonderful spots to introduce us to in Alsancak, the happening part of town.

It had been a long, tiring four weeks, so the first stop was for Turkish coffee. We traipsed along the main drag of Alsancak, Kibris Sehitleri Caddesi , and made a detour down a side street that was filled with tons of eclectic cafes! I would have been happy in any of them, but Asya took us to Münire, a tiny cafe specializing in nostalgia. The walls are covered with old toys, yellowing books, a collection of phones and typewriters, and a pile of suitcases sits beside the front door. Scratchy records spin classic Turkish tunes, and a vintage fridge stocks glass bottles of gazoz, various flavored fizzy drinks from different places all over Turkey. They only serve two things: gazoz and Turkish coffee. 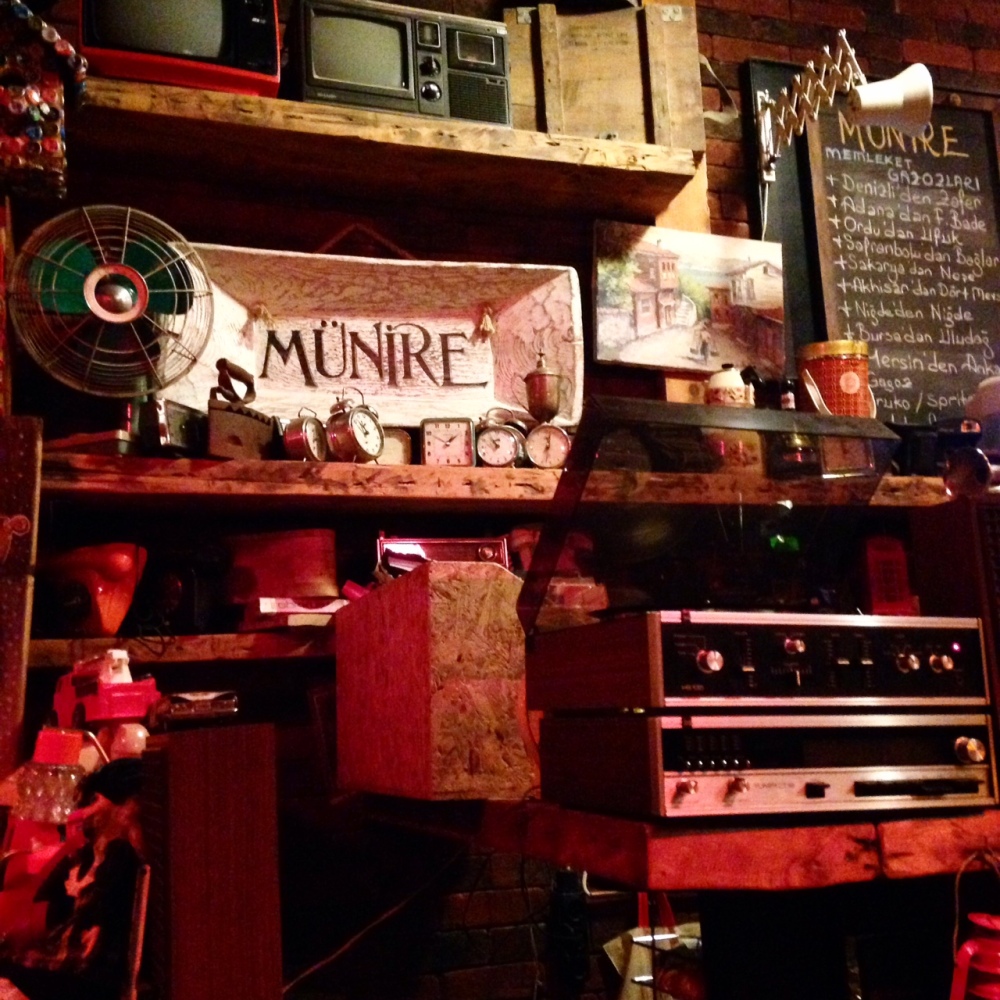 Having Türk kahve is something of a ritual. It is served piping hot in a tiny cup, and accompanied by a glass of water, so you can clean your mouth and taste the coffee properly. With the Turkish coffee is something sweet, usually lokum, also known as Turkish delight, the superior sister of the jelly bean. The coffee has a reputation of being strong in flavor, gritty with silty coffee grounds, and intensely energizing. It’s not everyone’s cup of tea (I couldn’t help myself), but I love it! 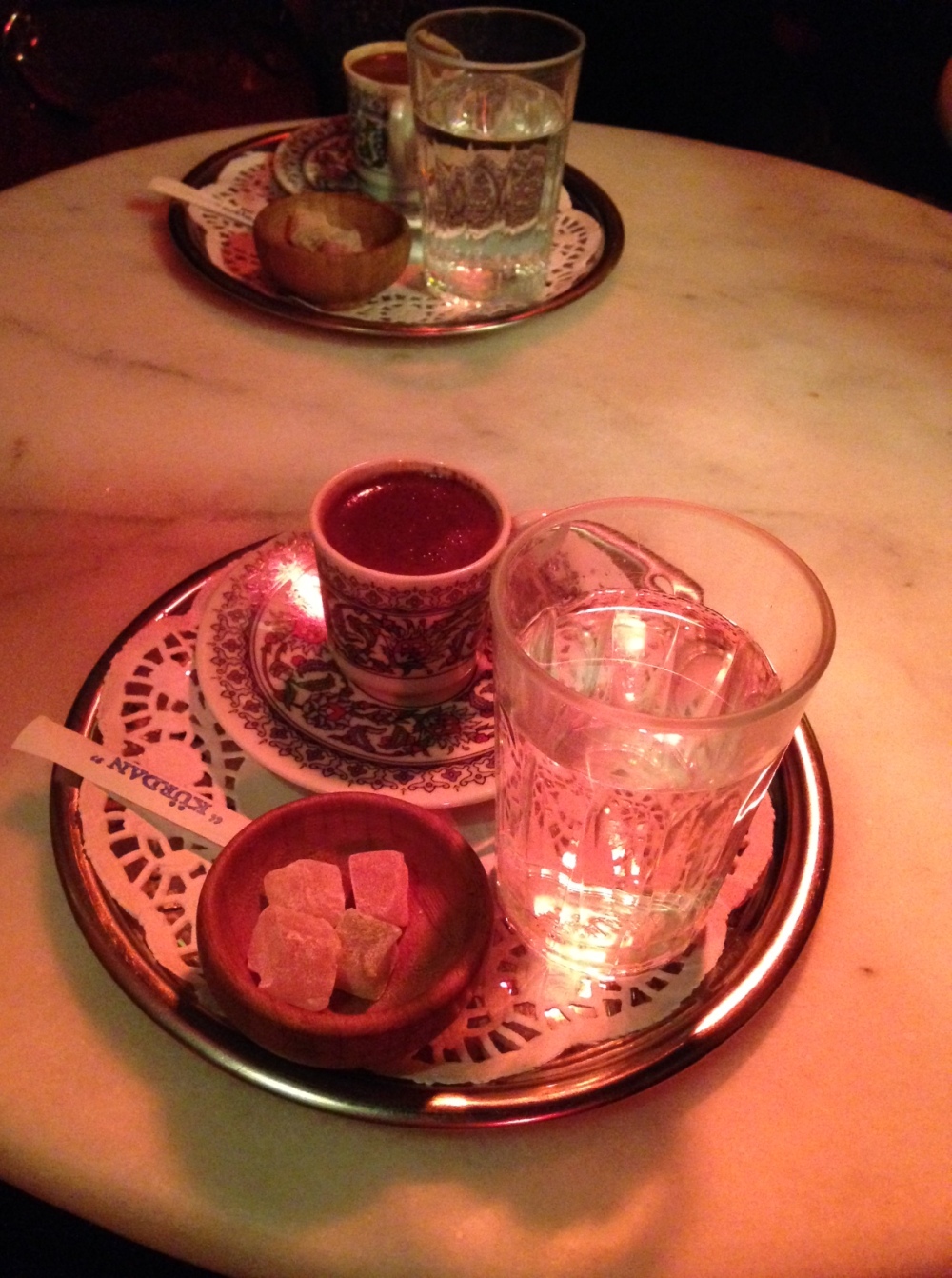 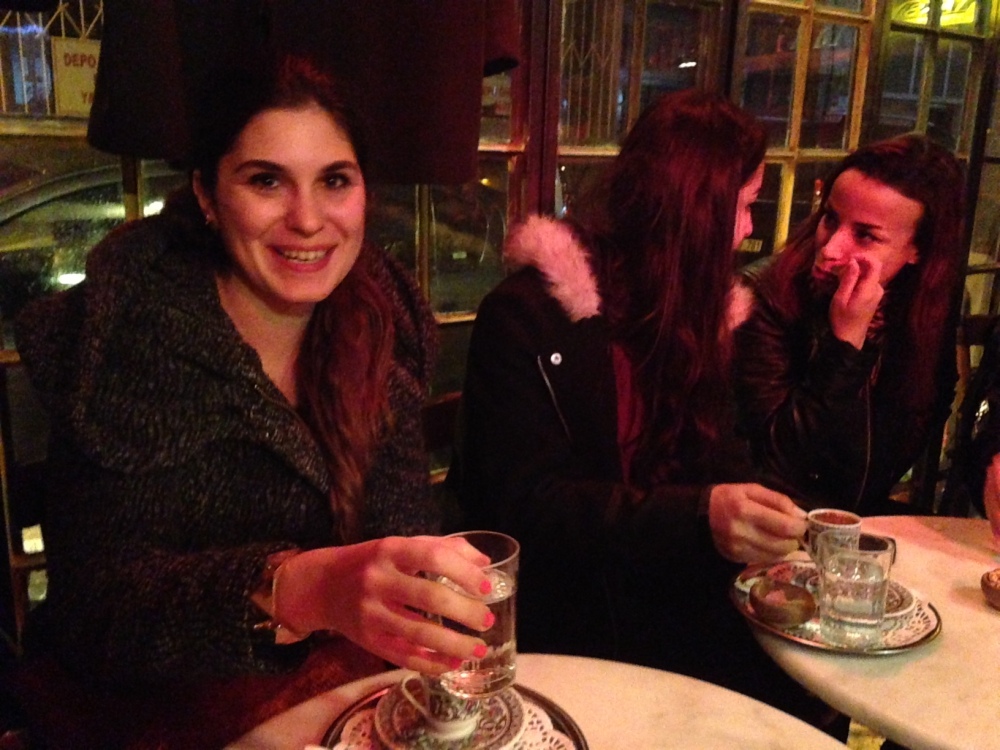 Before too long it was time to meet some of our students for dinner. Along the way, we passed a group of people on the street preparing some sort of food in plastic dishes for people to take. Asya and Şefika became very excited, and grabbed some for us to try. They explained that this was a tradition to remember loved ones that had passed, and while eating you were to say a prayer for the dead person. The dish was filled with small balls of fried dough drenched in a thin syrup, kind of like a beignet. What a tasty tradition!

We met the students at LeMan Kültür, a wacky restaurant that is themed around a popular cartoon of the same name. It’s a huge place, and great for large groups. Zac and I were not very hungry, so split some onion rings and chatted with Gökhan, Onür, Evren and Yaprak, four of the students from our intermediate group. Their English is good, and they were just as curious about our lives in the US as we were about theirs here in Turkey. Yaprak is the first vegan I’ve met here, and gave Zac and I a chart with various foods in Turkish and their nutritional values. It was such a thoughtful gift! It will be so helpful when we start cooking for real and need to know the Turkish names for things at the market.

Around nine we bid the students good night so that we could spend more time together with just the six of us. Asya took us to Kaos, a bar owned by a friend of hers that played good music and had a funky atmosphere. There was space for us on the closed terrace, and we ordered drinks: çay (Turkish tea) for Darek and Saloua, beer for Asya, and a pitcher of raki for Şefika, Zac and myself.

Like Türk kahve, raki has it’s own set of rituals and traditions. It is an aniseed liquor, so an acquired taste, but is the local firewater of Turkey, so must be experienced. First you measure out your desired amount of clear raki, then add water, which turns it into a milky white liquid. It’s fairly strong, but diluted in this way becomes smooth and palatable. Raki is not something to be drunk as a shot for the sole purpose of getting drunk, but needs to be savored and enjoyed alongside food and conversation. Salty snacks are the best accompaniment to raki, and our pitcher was served with a plate of pickles and a bowl of nuts. 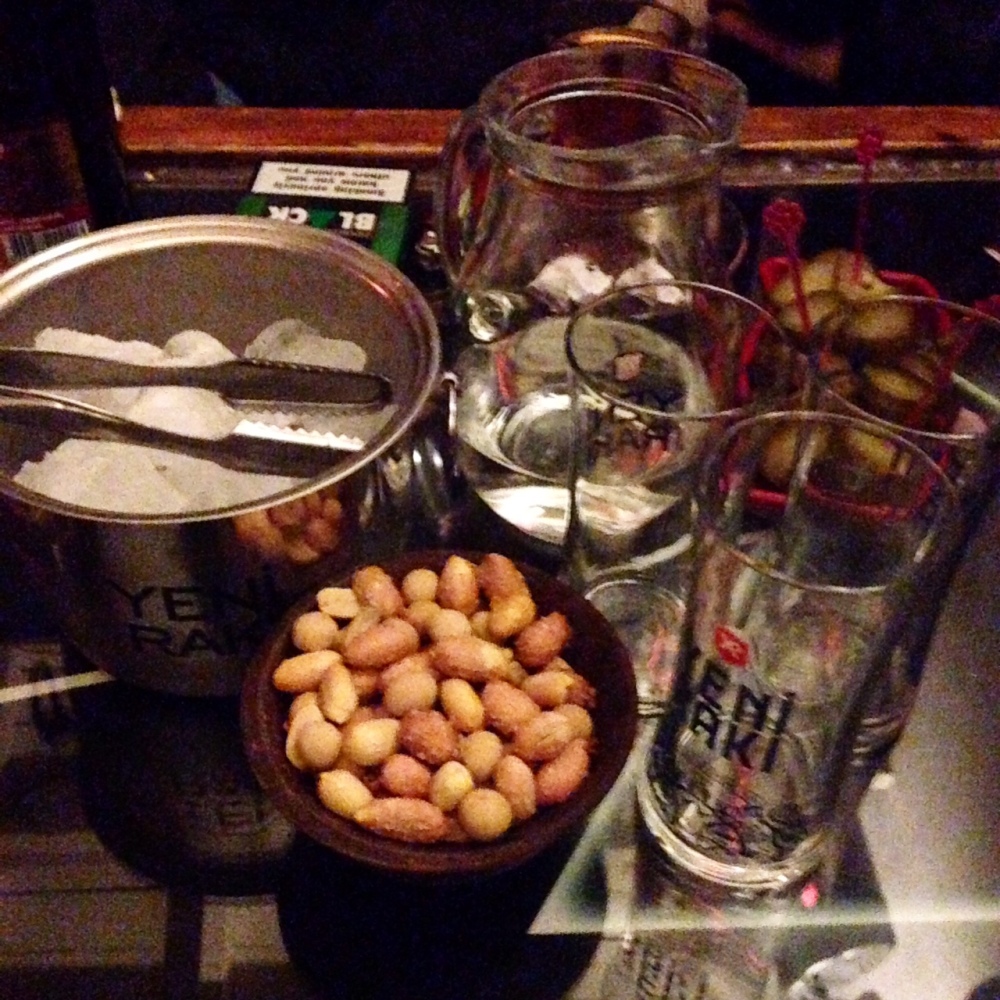 We talked and nursed our drinks for a time, then emotionally said goodbye to Darek and Saloua. Darek still had to pack for his flight the next day and Saloua needed to get back to her flat in Bornova district before the metro stopped. But Asya and Şefika had more tricks up their sleeves for us!

They eagerly took us back up the street to another bar, where some of Asya’s friends were playing in a band in an upstairs room. The band was Shukar Musika, a Balkan music band. Balkan music is probably some of the loudest, most joyful, and energetic music on the planet, and seeing it live is an incredible experience. The band had your standard guitar, drum and bass setup, but also a horn section and a saxaphone! I loved the two male singers, who had amazing, haunting voices, and the girl bassist was a lot of fun to watch. I adore live music, and it had been far too long since I’d experienced any. The moment I sat down I was tapping my foot and swaying to the beat, and it wasn’t too long until I was out of my seat and dancing with Asya, Şefika, and a bunch of other Turkish girls getting in the groove. 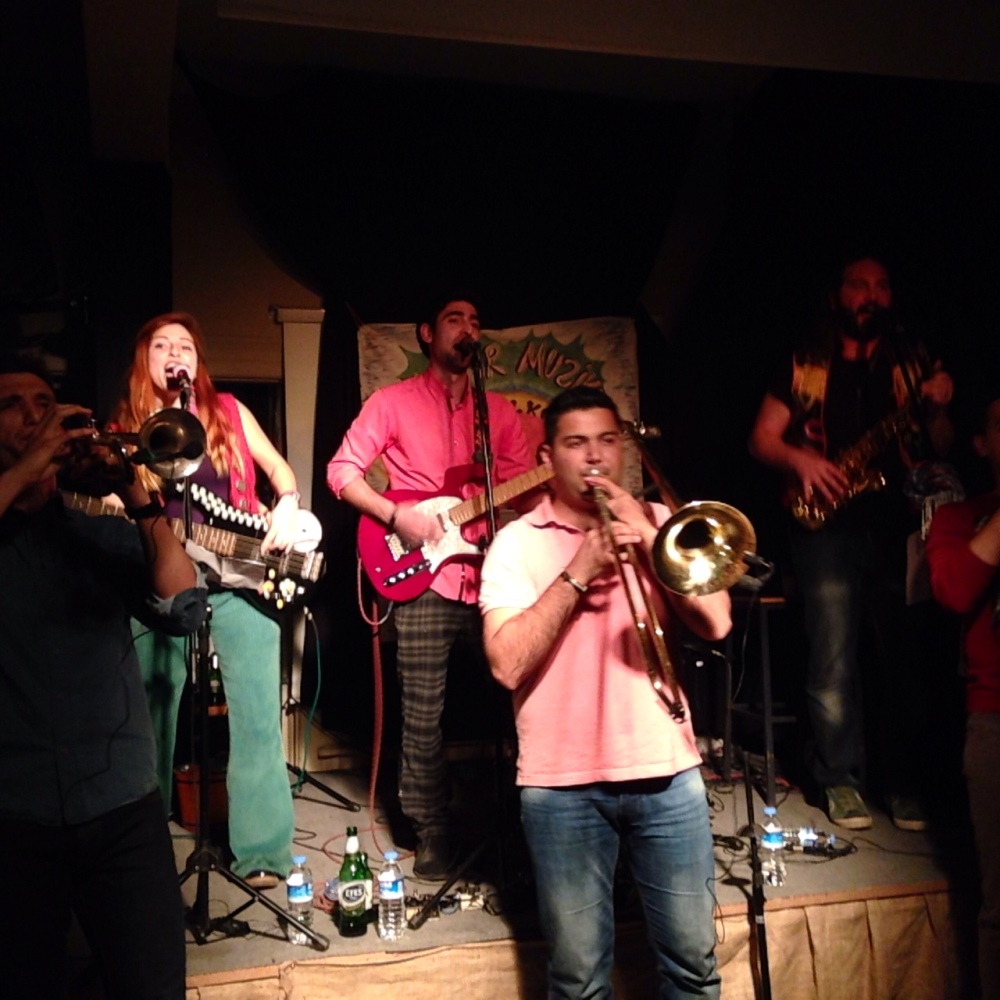 I have no idea how long we stayed, it could have been 20 minutes or 2 hours, but eventually we made our way back out to the streets of Alsancak. We ducked into 45’lik, a famous, fancy nightclub that only plays Turkish music, to check out the scene from the upstairs balcony. It was filled with serious-faced, well-dressed Turks, all bobbing along to Turkish Kiss, a song from Turkish pop hearthrob Tarkan, while lights flashed and bustling bartenders kept up with the patrons. Not our place, but fun to see. 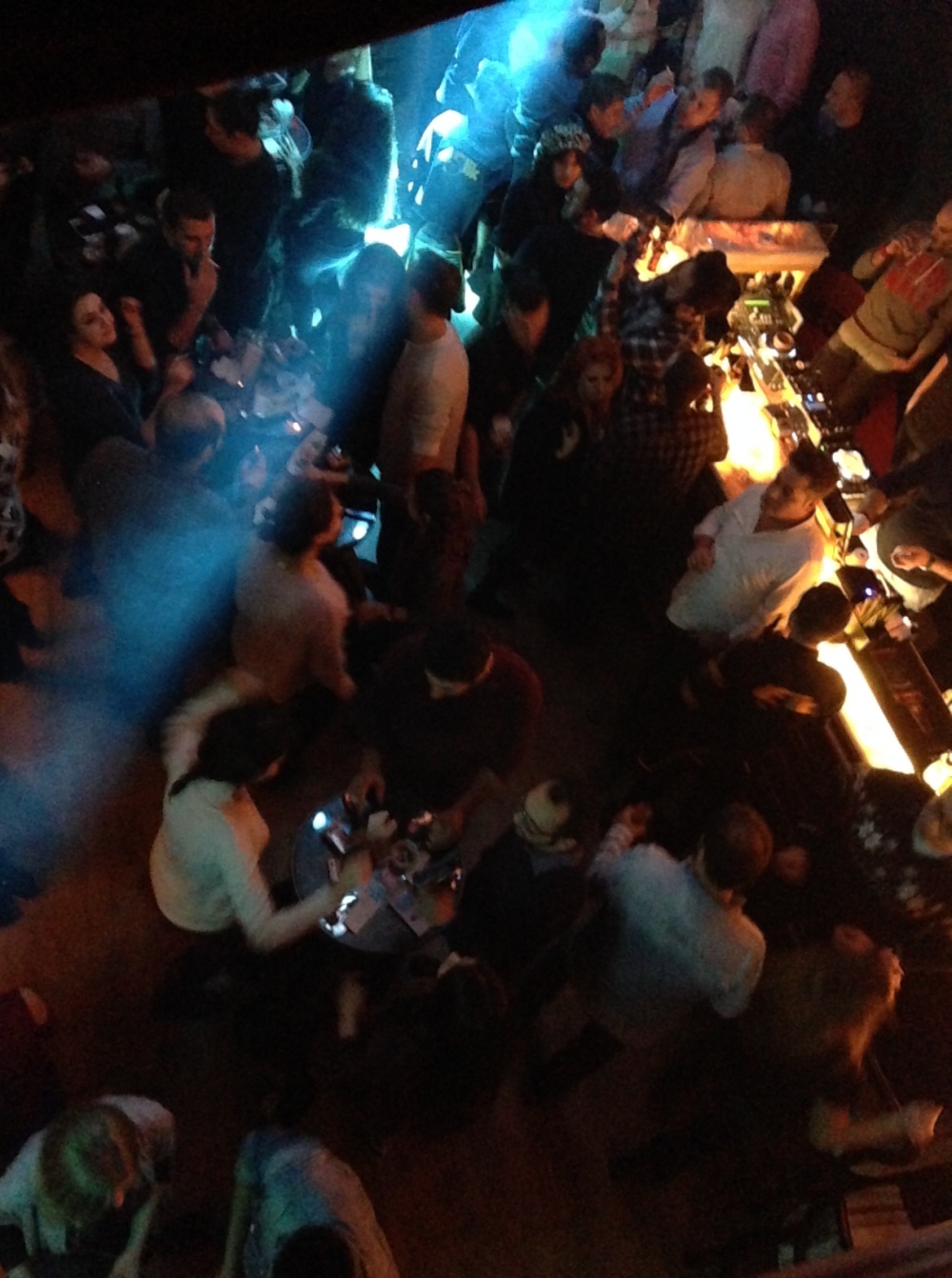 We wound down the night at yet another bar where Asya knew the owners, which she promised had cheap beer and good music. It was true about the beer. The bar was playing reggae, which I think is considered good music to literally everyone but me. I just don’t have an ear for it, to me it all sounds the same! But the conversation admidst the four of us was excellent, even when a strange drunk guy asked if he could sit and talk with us. Even stranger, the minute we got up to pay the bill and leave, he vanished! None of us saw him leave or where he went.

We took a taxi to Asya’s place in the Balçova neighborhood, were Zac and I would be spending the night, dropping Şefika off en route. Asya lives on the seventh floor of an older building. Her apartment is gorgeous and artfully designed with a magnificent view of the surrounding neighborhood and the bay beyond. Her husband, Ösgür, had had a long day at work and was drinking raki and invited us to join him. It was nearly 2 by this time, but why let the night end there! So we talked more and drank raki and listened to music until it was nearly 4 and bed became a necessity.

This was truly our first night out in Izmir, and what a night! It was epic, the perfect end to our weeks of CELTA and the cementing of new friendships here in our new city. 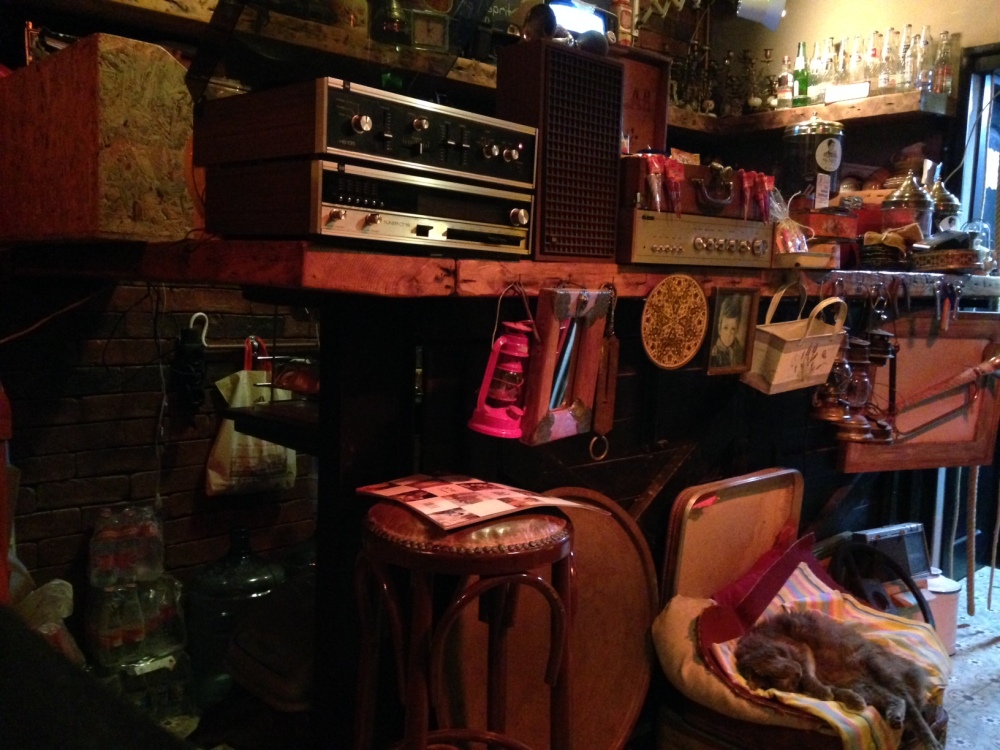