Back in May, Zac and I celebrated our ninth anniversary. That’s right, 9 years!

In my younger years, I never thought I was a “relationship” person. I’d had only one boyfriend in high school and barely dated in university before we started seeing each other. But all these years later, things worked out well and now we have the incredible opportunity to see the world together.

In many ways, we’re not a stereotypical couple. We’re not into fancy dinners or tropical getaways. We just wanted to get away from the city and explore somewhere new for a day, so we took the train to Selçuk.

I love traveling by train. Growing up in Los Angeles, it was rare that I rode or even saw a train. For me, trains have always had a certain fascination, romance, and nostalgia. It was our first time taking the train while living in Turkey, and like most forms of transport here it was easy and cheap.

While Selçuk has a large number of historic buildings and attractions, it is most famous for being near Ephesus, the best preserved ruins in the Mediterranean. This has caused the town to be pretty touristy in some areas. I was surprised by the amount of people with backpacks and cameras and the English signage in shops and restaurants, way more than I’d seen in Izmir. Even so, the sights in Selçuk are pretty remarkable.

On the outskirts of town, we walked along dusty fields of olive trees. In the center, partially obscured by foliage, stood a lone pillar. This pillar is all that remains of the Temple of Artemis, one of the wonders of the ancient world. I remember studying it when I was young. I loved learning about the ancient world. It was strange to be across the world and gazing upon it, yet seeing nothing of it’s magnificent former self. Further on, we discovered more wonders: the ruins of a 14th century hamam and a family of goats.

Next we visited the İsa Bey Camii, an impressive mosque at the base of a hill. Can you believe I’d been in Turkey for 5 months and had not been inside a mosque? I covered my head with my scarf and entered. I’m always surprised by the vast spaciousness inside mosques, but I suppose that churches and synagogues would feel just as spacious without seats and pews and pillars. This mosque was actually not so big inside, but the high outer walls contained a beautiful flowered courtyard. Leaning up against one wall was what we believed to be a row of Muslim gravestones. I’ve been learning Arabic and attempted to read what they said, but the flowery calligraphy proved to be a challenge.

Next we went to the Basilica of St. John, which was astounding. Built in the 6th century by the emperor Justinian, the basilica is an enormous church that was believed to be built upon the burial site of John the Apostle. Even thought the basilica is in ruins, wandering through its crumbling pillars gives you an idea of just how large it was, and a 3D model paints a picture of how it would have looked all those years ago. An interesting thing about visiting historic sites in Turkey is that once you’ve paid your entrance ticket, hardly anything is off-limits. In many other places, there is usually a rope or barrier keeping visitors from getting too close, but in Turkey, for better or worse, you can pretty much wander wherever you wish. We also saw some unexpected wildlife there: several turtles crawling around a field and a few tiny kittens near the entrance.

The ticket to the basilica also includes admission to Ayasuluk Fortress, so up the cobble-stoned path we trudged. The fortress is still very much under excavation, as digs only began in 1990 and this land has been inhabited since the Neolithic age. The fortress certainly looks imposing, high on the hill with it’s crenelated walls. Once inside the walls, we enjoyed scrambling around the ruined buildings and were treated to an amazing view of Selçuk and the surrounding area.

After, we tried to find a library that we had read about it our guidebook, but it was unfortunately closed for the day. What to do? Find ice cream, of course! Cornetto cones from tekel (liquor) shops have been the secret to our survival this summer in Turkey. We found some that day in Selçuk (my favorite flavor: pistachio and chocolate) and contentedly ate them at a deserted cafe table a square with an odd fountain that featured giant tinsel swans. 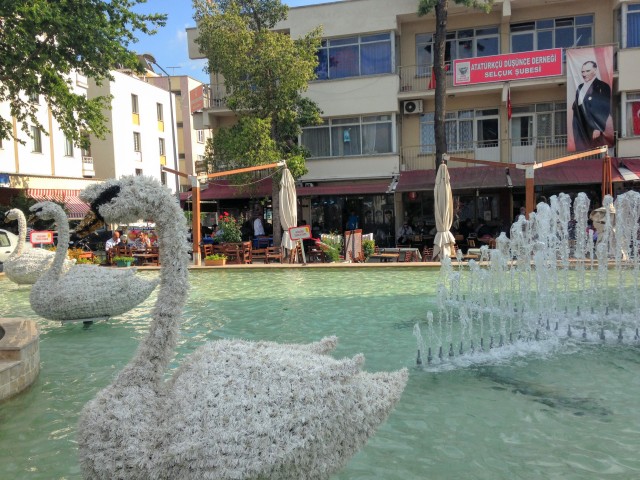 It was late afternoon when we boarded the train back to Izmir. I put in my headphones and listened to music, staring at the passing fields and valleys in the golden evening light. Before too long I fell asleep, content and happy with the day’s explorations.

2 thoughts on “Tripping Through Time in Selçuk”