In the US, I have never been one to get a massage or go to a spa. These were things I always viewed as luxuries that I simply couldn’t afford. But I still do love the relaxation and self-care that these experiences offer, which is why I love hot springs and bathhouses.

I’ve written about this before. I’ve hit up the hamam in Turkey, the opulent Neoclassical bathhouses in Budapest, a few different Korean spas in Koreatown in Los Angeles, and even rustic hot springs in the middle of the mountains of Northern California. Besides the relaxation and pure bliss of soaking in hot, sulphuric waters, I love the social aspect of these places and the glimpse into another culture that you get by partaking in these local customs. The fact that one is surrounded by naked or nearly-naked strangers doesn’t faze me. I’ve been doing wardrobe crew in theater since I was 16, so for me modesty went out the window long ago.

Japan has a pretty famous bathing culture, and public bathhouses have been the norm for centuries. Nowadays, most people have bathtubs in their houses, but sentos and onsens are still popular for those who want to relax and get clean in a more social atmosphere. A sento is any public bathhouse, and the atmosphere and fanciness can vary widely. At a sento, you may encounter natural thermal waters, or just plain old heated tap water. An onsen is the sento’s chicer older sister. For a sento to be called an onsen, the water must be natural thermal water, and most of them are more luxurious, located in the mountains in resort towns, often with the bath itself located outdoors. 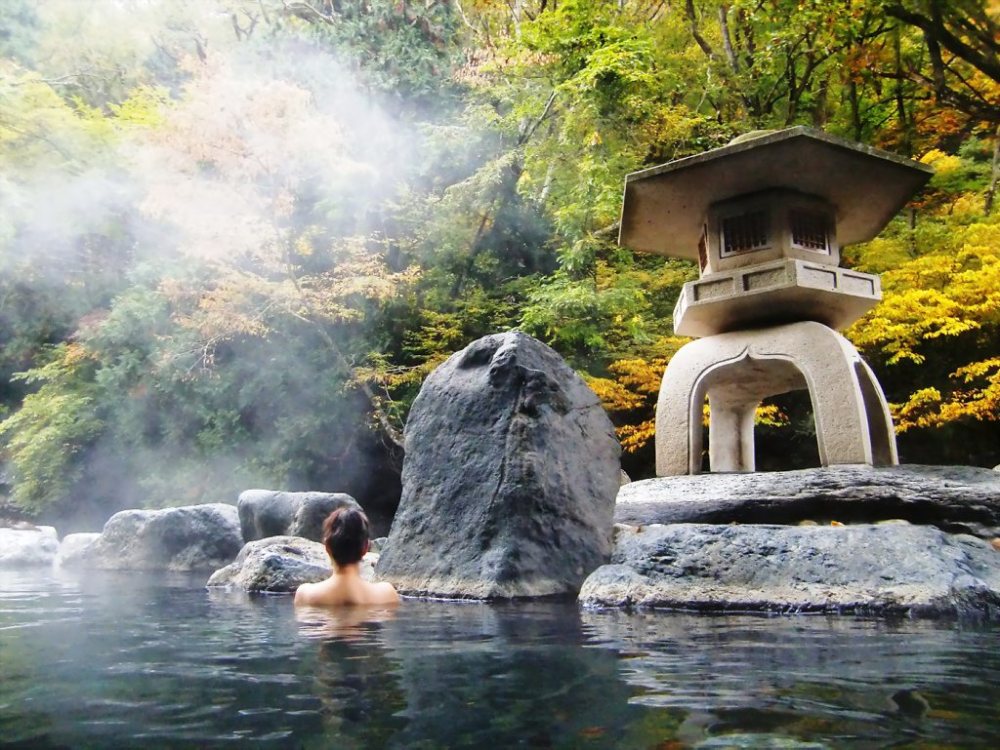 I had been dreaming about Japanese onsens from the moment I arrived in Japan, but it wasn’t until my friend and I were visiting the port city of Kobe on our New Year’s holiday that I finally got to experience one. Most onsens are in the mountains outside of cities, but because of Kobe’s hilly landscape there is one, Arima Onsen, located just a short train ride from town. It also happens to be one of the oldest onsens in Japan, and has been mentioned in documents since the 8th century.

Once off the train, we wandered the tiny, winding streets of the resort town, and headed uphill searching for the bathhouses. Around the springs a whole tourist industry has sprung up, with resorts, restaurants, and shops. The streets were busy that day with other tourists, most of them Japanese. For a good holiday, Japanese folks love nothing more than a few relaxing days in a resort near an onsen with good, local food shared by friends and family, and it was clear that day that many people were doing just that. 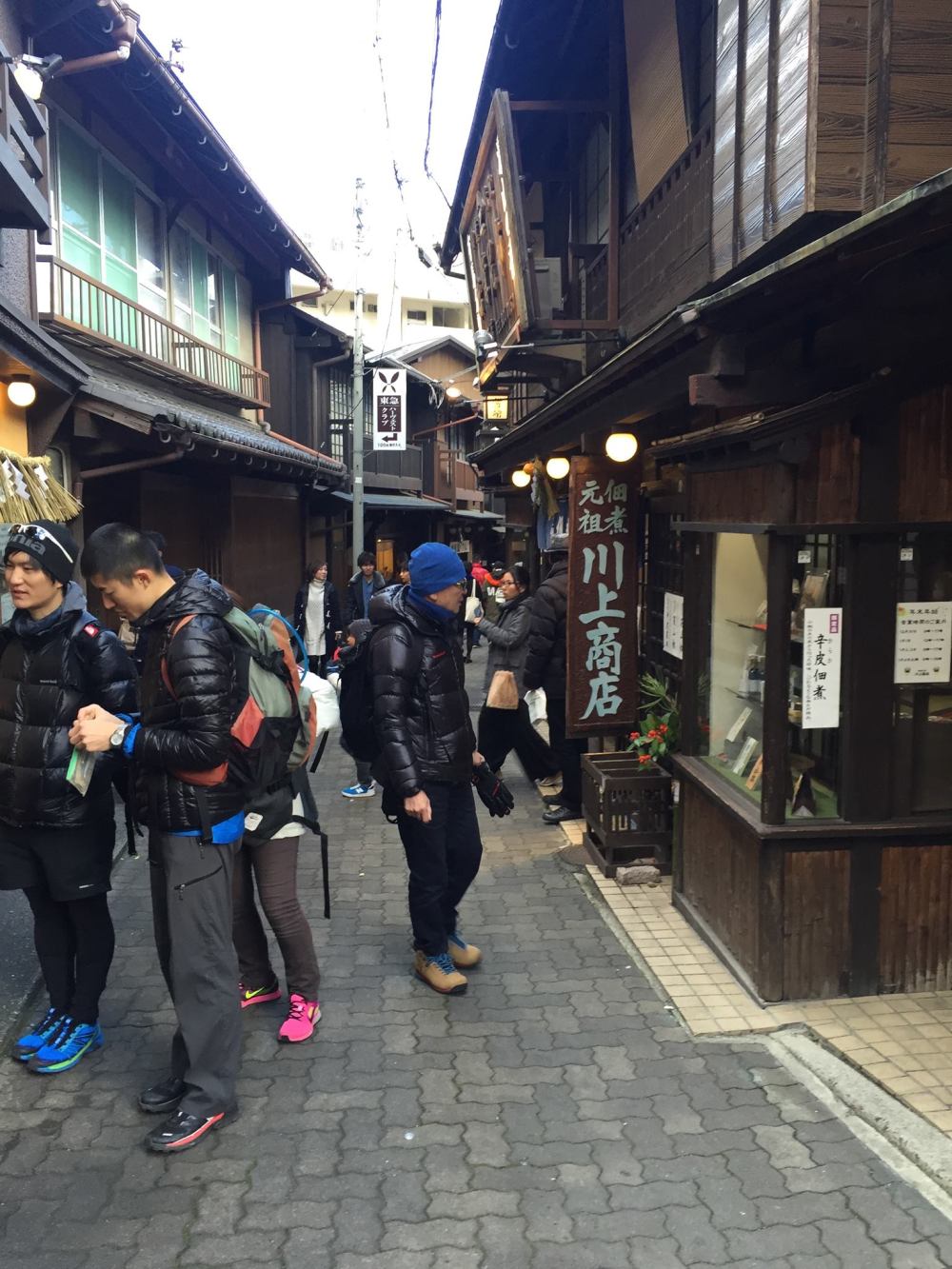 We followed the signs to Ginsen, the “silver” spring, the smaller of Arima Onsen’s two thermal springs. At ¥850 (just over $7) for a combo ticket allowing us to visit both springs, it was an affordable outing, but we did have to purchase towels for an additional ¥500. 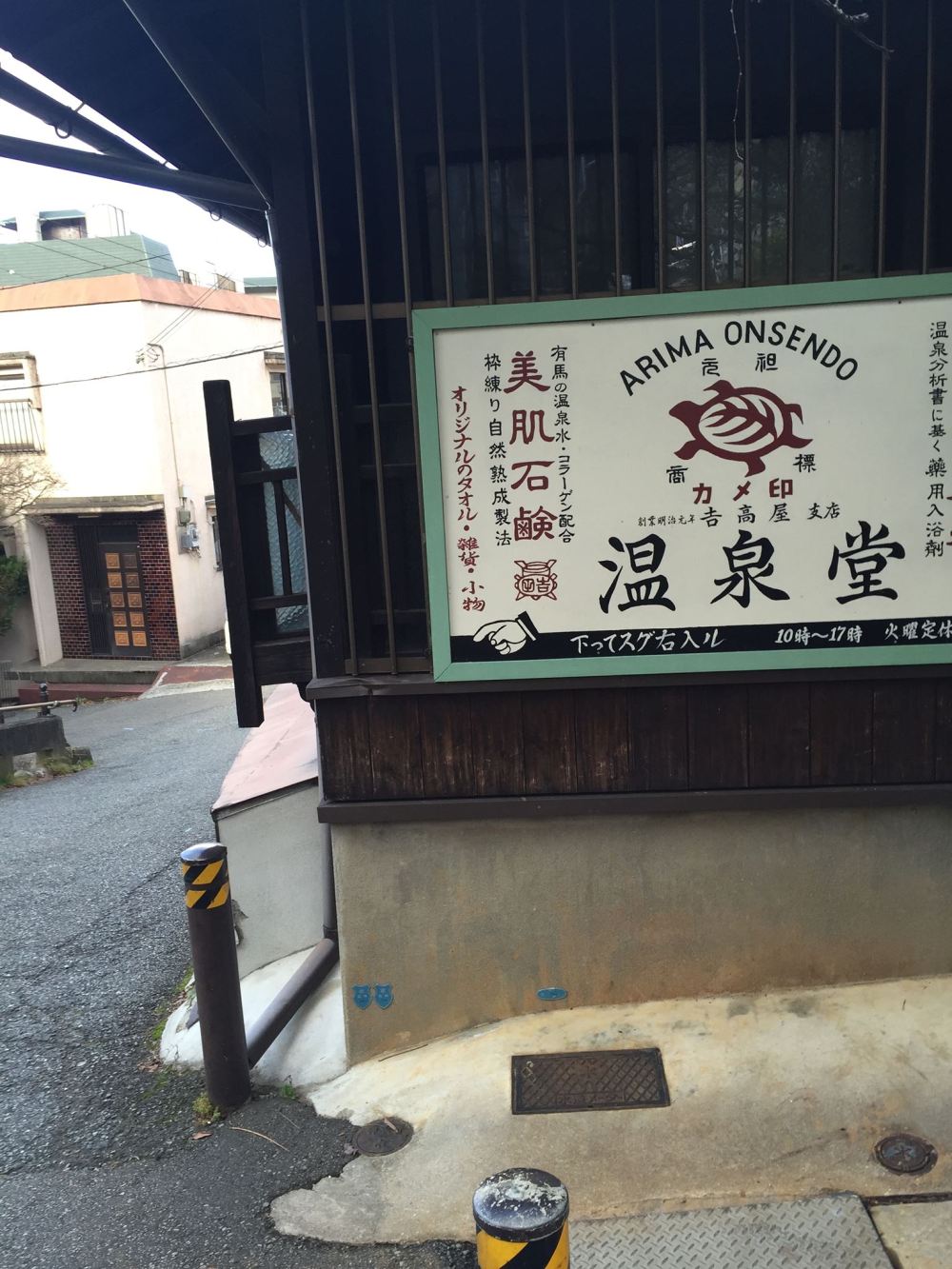 Here’s how it works: upon entering the building, you first have to remove your shoes. Taking off shoes before entering a private space, like someone’s home, is a traditional Japanese custom, and the same rules apply to traditional public spaces such as temples and onsens. Once you’ve purchased your ticket and towel, if necessary, you are given a locker key for the changing room. Originally, bathhouses were mixed genders, but this was banned in the Edo period (1603-1868). While there is no longer a ban in place, mixed gender onsens and sentos are quite rare, so usually women and men will be separate, which was the case at Arima Onsen. In the changing room, you take everything off, and take only your towel, locker key, and any toiletries you’ve brought with you into the room with the ofuro (the bath), although shampoo and body wash is provided. Before you step in to the ofuro, though, you have to take a shower so that you don’t dirty the water with any dirt or oils on your skin, which you do at one of the low showers along the wall, each with a plastic stool to sit on and a plastic bucket that you can use to dump water on yourself.

Taking a shower sitting down sounds weird to those accustomed to standing while showering, but it’s really not, and kind of adds to the relaxation of the experience. I took my time showering, and thankfully remembered the onsen etiquette I’d read and washed off the stool for the next person, then slowly worked my way into the incredibly hot bath. The “silver” spring consisted of one large pool with a small fountain, and the water was clear, with radium and carbonate that is naturally present in the water, as I later found out. It wasn’t too crowded, surprisingly, and my friend and I were the only non-Japanese women there. We quickly bonded with a pair of Japanese women next to us. Although there was a language barrier of course, some things you don’t need language to communicate, and stripped of our clothing, submerged in hot, thermal water, we were all just women, sharing a common experience.

After a proper soak, we dressed and went down the hill to experience Kinsen, the “gold” spring. This bathhouse was much bigger and more popular. There were lines to get in, but thankfully the women’s line was small compared to the men’s, and we only had to wait about 10 minutes before we were given locker keys and made our way to the crowded changing room. The “gold” spring had 3 baths; two of which had murky brownish water due to iron and salt that were 45°C and 43°C, and a smaller clear pool which was much cooler in temperature. Again, we were the only non-Japanese women present, and leisurely made our way from pool to pool while enjoying watching the women around us chat and relax. Once we were good and cooked, we took our time with a final shower and dressing.

Back outside, it was still crowded with tourists and quite cold, but I felt absolutely amazing. I felt as if I had been warmed from the inside, and so clean and at peace. We indulged in some gelato and tea at a cafe, and in the late afternoon when the day began to slip away took the train back to Kobe. It was a beautiful ride, and the interior of the compartment and the surrounding forested hillsides and small communities were bathed in a warm golden light that perfectly matched my mood. It had been an unforgettable day. 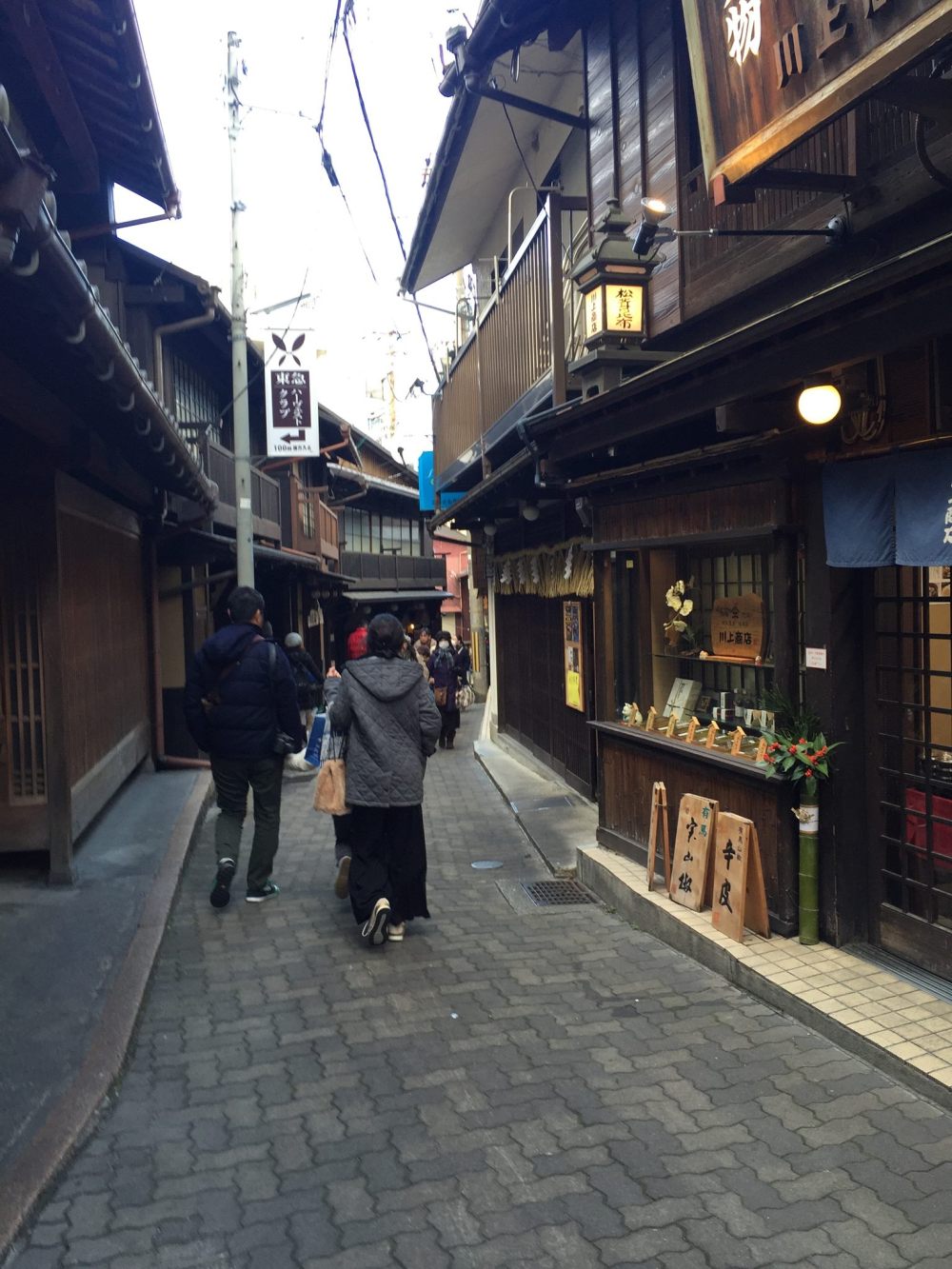 So now that I’ve had my first onsen experience, I cannot wait for more! How many times can I go during my year in Japan, I wonder? 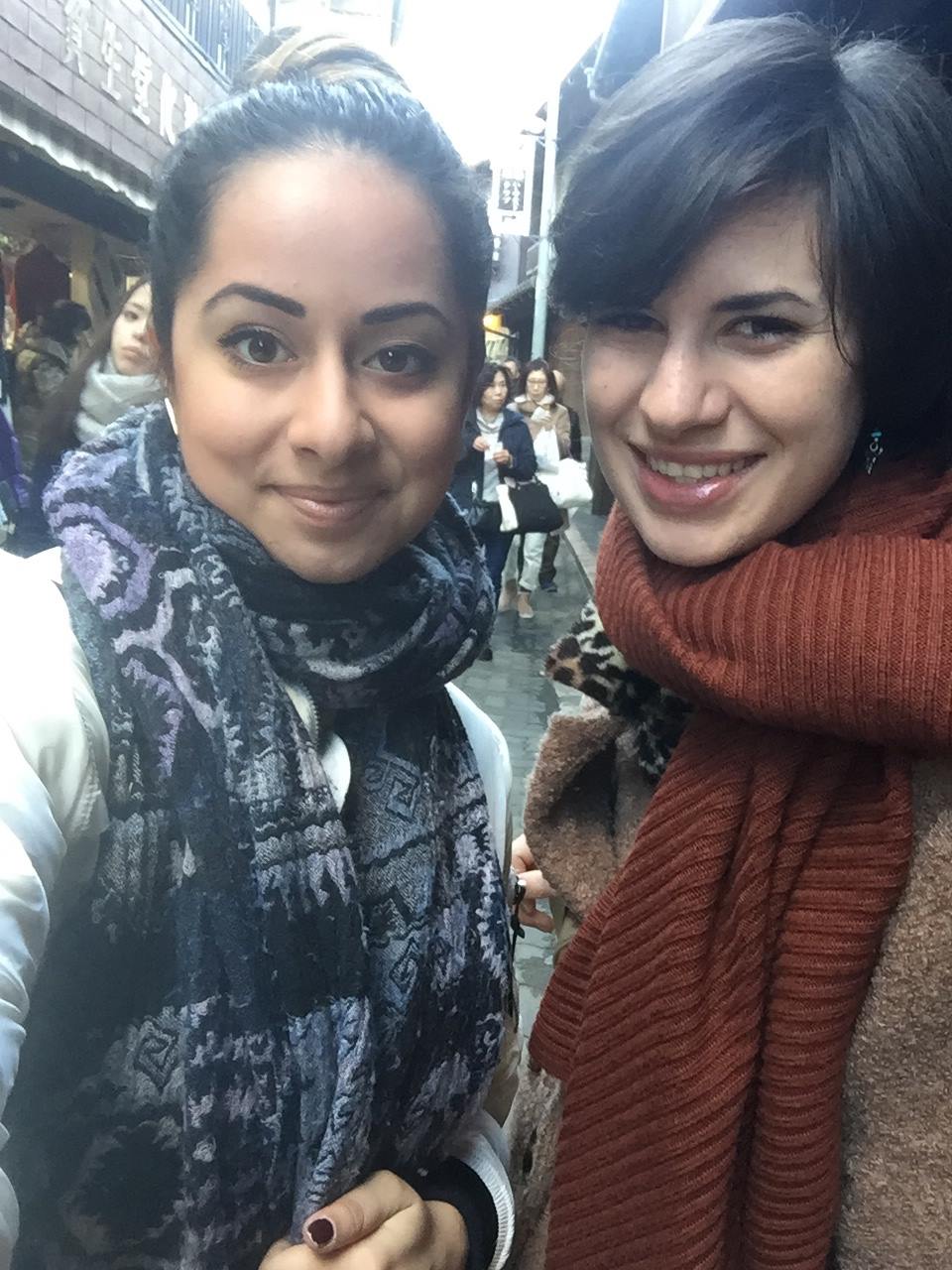 Finally received this care package from Japan courtesy of @mrfatkat stuffed with my favorite Saborino face masks and Melty Kiss chocolates!! I’m so lucky to have such caring and thoughtful friends. Great way to finish out 2021!
Four months in LA, and still making the rounds of my former haunts. Bellinis and mimosas followed by Mac and cheese at Swingers. #lalaland #laeats #bellinitime
A few more from the Academy Museum: ruby slippers from The Wizard of Oz; costumes worn by Marilyn Monroe and Jane Russell for Gentlemen Prefer Blondes; costume design by Edith Head for Grace Kelly in Rear Window; Mr. and Mrs. Fox from Fantastic Mr. Fox. #lalaland #academymuseum #museumrowla #moviemagic
Finally was able to visit the Academy Museum with my parents yesterday. What an incredible collection of Hollywood history, and so excellently curated, showing all of the facets that go into making movie and the many people that have made it happen over the years, not all of them white and male! Pictured: camera lenses used on Citizen Kane; posters for films by Oscar Micheaux, a prolific early Black director and producer; costumes from Do The Right Thing; storyboard for Psycho; a three-strip Technicolor camera; script from Blue Velvet with Laura Dern’s notes; Harold Lloyd’s makeup case. #lalaland #academymuseum #museumrowlosangeles #moviemagic
Belated birthday brunch with my sister. #twinning #sagittariusesdoitbest #sundaybrunch #foodporn #nicsonbeverly
Happy Chanukkah! Complete with my grandmother’s egg salad recipe (a family tradition) and my great-grandparents’ menorah. #happychanukkah #menorah #firstnightofchanukkah