Except for a jaunt to Tokyo during Golden Week and a day trip to the historic village of Shirakawago (both of which I really need to write about, I know!) I’ve spent the past two months in Kanazawa seeing local sites and getting to know this place I now call home. Much of my wanderings have been with my fellow teachers at the language school where I work, a fabulous group of people who also live in my apartment building and who I am happy to call my friends. They’ve introduced me to important local landmarks, such as the best conveyor-belt sushi place in town, the pub where the owner likes us and gives us good all-you-can-drink deals, and the cafe next door where we gather and play Settlers of Catan on Saturday nights. Essential stuff.

Kanazawa may not be a big city, but notable things do happen here. This past weekend, the 101st High School Sumo Kanazawa Tournament was held at the sumo ring in Utatsuyama, a local mountain with many parks, temples and pretty places to walk and hike where my friends and I have picnicked on occasion. Sumo typically happens only in big cities and can be pretty expensive, so how could I not take the opportunity to see the up-and-comers of this unique Japanese sport for only ¥800, and practically in my backyard??? Ishikawa, the prefecture that Kanazawa is in, is known for producing a lot of professional sumo wrestlers, and this high school tournament is one of the oldest amateur sports events in the country and has been held annually in May since 1915.

My cohorts and I gathered bright and early on the appointed day, a bit bleary from sushi, Catan and beer the night before, but excited and not entirely sure what to expect. We made a stop at a conbini (convenience store) for reinforcements and made our way to Utatsuyama, taking a shortcut that had us scrambling up the side of the mountain rather than walking on the long and winding road. We paid the entrance fee and entered the outdoor arena. The spectacle that greeted us was unlike anything I’ve seen before. The dirt sumo ring in the center with some wrestlers, referees and judges hanging about was certainly interesting, but what I initially found fascinating was the crowd. The stands around the ring were sectioned off for the various high schools, and in these sections were countless uniformed high school students, cheerleaders, and marching bands. In the midst of these vast cheering sections, scaffolds had been erected, and on these scaffolds were chant leaders, waving signs and showing the rest of the students the appropriate hand gestures to accompany each choreographed chant. Throughout the festivities, which lasted 6 hours (!!!), there was a constant stream of noise, with different school bands playing and the entire school cheering along and doing the chants in perfect synchronization. It was impressive, borderline creepy, and very Japanese. 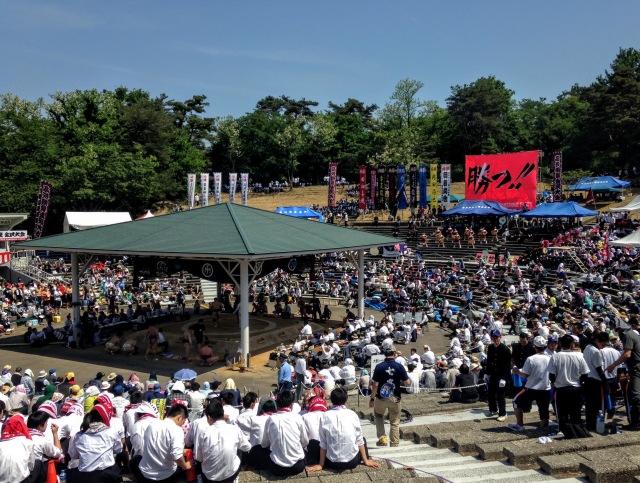 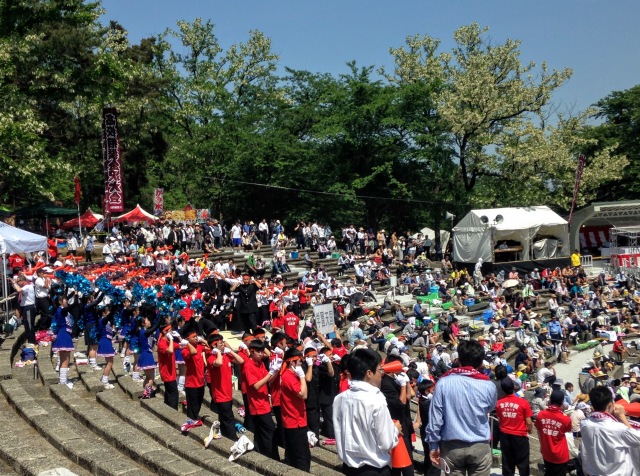 We got there before the event had really gotten going, so had a bit of a wander, checking out the various cheering sections and festival food. Tucked off to the side were a bunch of practice rings with a sea of high school sumo wrestlers of varying sizes getting ready for their time to shine. We weren’t sure if we were allowed to go in there, but we shamelessly played our foreigner card and took a closer look. In fact, the whole day I only saw one other foreigner at the festival, and our group got stopped often by local reporters wanting to ask us where we were from and what we thought of sumo. 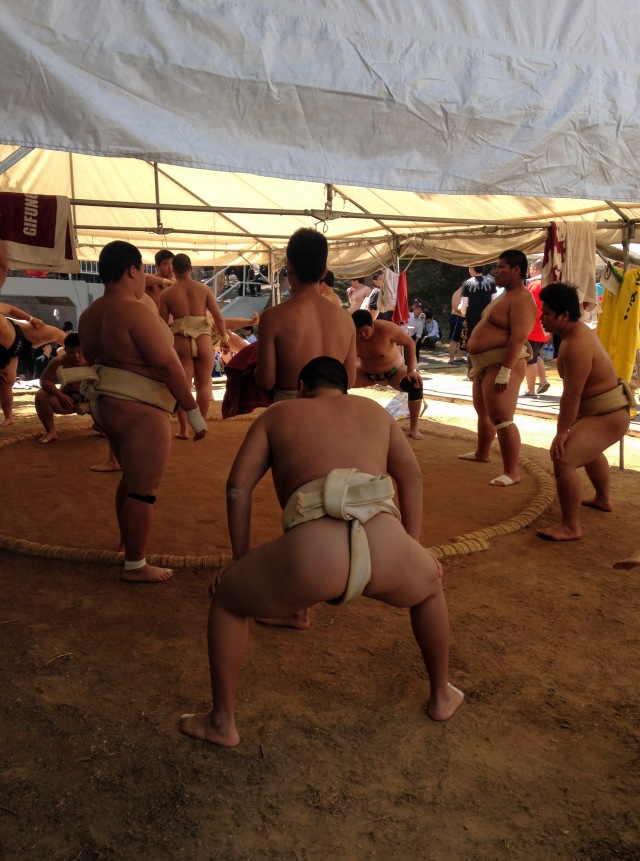 It was the hottest day of the year so far, so the best places to watch the tournament were high above the ring, behind the stands and cheering sections on some dry grass in the shade of patchy trees. Cold drinks and a snack of acid-green melon shaved ice helped too!

I’m not sure exactly what I was expecting of sumo as I’m not much for sporting events, but I found it to be pretty exciting and impressive. I think in the West when we think of sumo all we think of is fat guys in loincloths, but it’s much more than that. In the high school tournament, many of the wrestlers were not fat at all, some were actually quite lean, but all were incredibly powerful and skilled. Sumo doesn’t have many rules. To win all you need to do is to push your opponent out of the ring or get some part of his body to touch the floor other than his feet. The bouts are very short, some lasting only 30 seconds, but the longer ones get very dramatic and can end with one or both players flipped on their backs far outside the ring. Throughout the day, the competitors were progressively better, and the bouts became longer and more intense. Overall, I thoroughly enjoyed it! 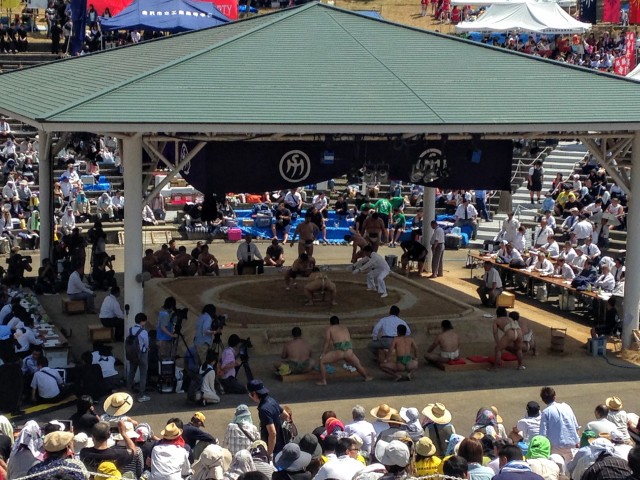 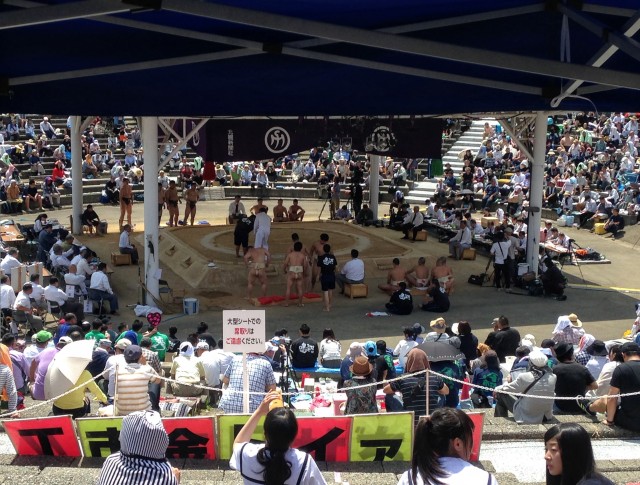 But more than just enjoying the sumo itself, I enjoyed the event and atmosphere of the day. The spectacle of the students cheering, the community vibe with entire families turning out to watch, and the act of sharing such a unique, cultural experience with new friends put this as one of my favorite days in Japan so far.

PS – To promote the high school sumo tournament, a video was produced of two actresses (who also happen to be black belts in judo) dressed in school girl sailor costumes demonstrating the 82 winning moves in sumo. If you are interested in sumo or just want to see something weird from Japan, I highly recommend you give it a watch! Click here to see some school girl sumo. 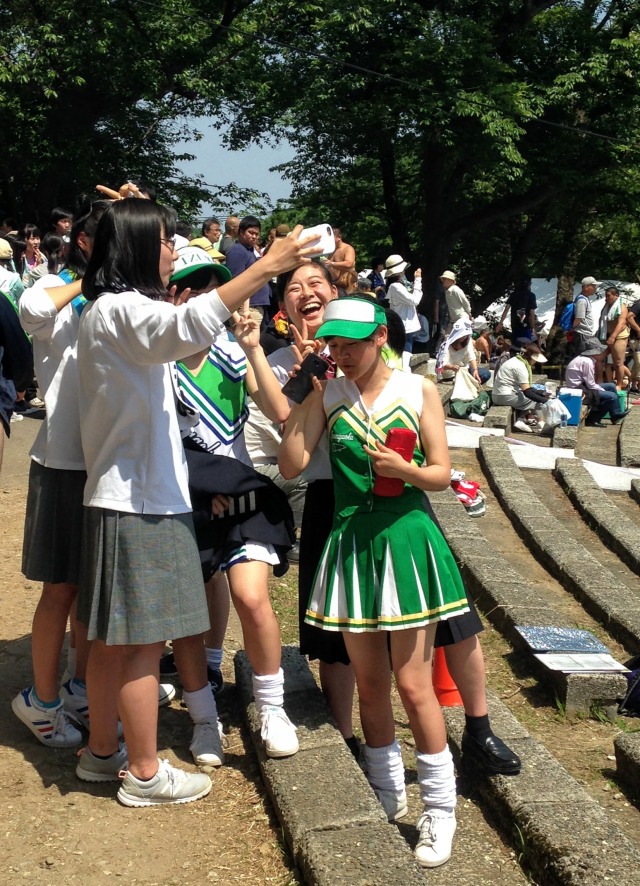