It took me almost 6 months, but I finally made it to Tokyo!

Tokyo. Just the name conjures up so much in the imagination. Flashing lights, tall buildings, the busiest crosswalk in the world. A massive behemoth of a city with so much to offer, I was overwhelmed just thinking about planning my visit. But I had 3 days off for Golden Week, a major holiday period in Japan, and decided not to put it off any longer. I booked my hostel and decided that the best way to plan this trip would be to just not plan it. I found a hostel in my budget with good reviews on Hostelworld.com and booked it. Unusually for me, I didn’t even crack open my guidebook until my train ride to Tokyo, where I thumbed through and picked a few things of interest.

The other reason I’d been putting off a visit to Tokyo was the expense. My hostel wasn’t bad, but just getting to Tokyo was pricey. The best choice for this visit was the Shinkansen, which would maximize my time by cutting a 7 hour journey into just over 3 hours – at ¥13,600 (roughly $122) each way. But I couldn’t not go to Tokyo during my time in Japan. That would be like living in France and never going to Paris!

My hostel was walking distance from Asakusa, an older area in Eastern Tokyo famous for funky pubs and restaurants and for being the home of Sensoji, the oldest temple in Tokyo. After dropping my stuff off and getting a map I wandered over therefor some ramen. The neighborhood of my hostel was quiet, the opposite of what I had expected Tokyo to be like, but as I neared the temple the streets got increasingly more crowded. After fueling up on delicious ramen (the suggestion of one of the awesome hostel workers!) I managed to find a friend from Nagoya in the crazy throng of people, and together we approached the temple.

Sensoji is huge, and incredibly impressive. We purified ourselves at the special fountain for hand and mouth washing, wafted incense over our hair and clothes, and climbed the steps to the temple, our mouths hanging open in awe the entire time. Sensoji is one of the star attractions in Tokyo, and as such caters to tourists more than the average Japanese Buddhist temple. Leading up to it is a long street with stalls of street food and souvenirs, and inside the temple are o-mikuji stalls, where for a small fee you can receive a paper fortune. These fortunes are common at any temple, but Sensoji is the first that I’ve seen with the fortunes printed in languages, including English. Both my friend and I got pretty good ones! 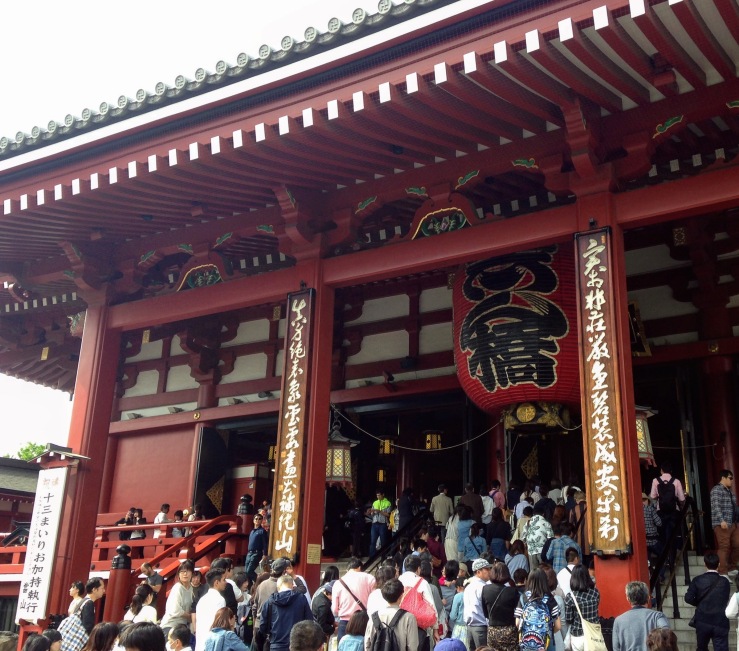 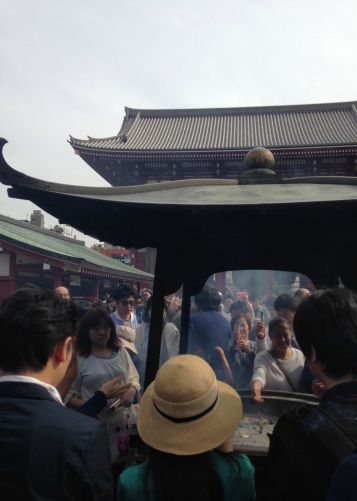 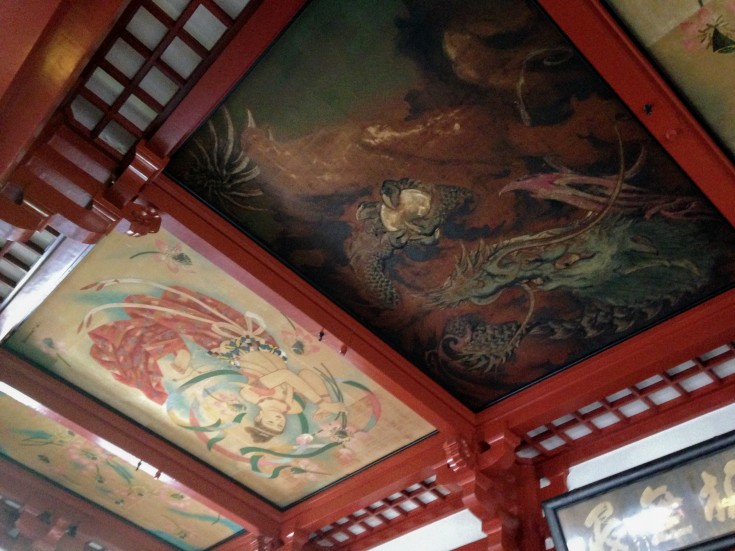 The beautiful ceiling of the temple

With evening falling, we headed to another star attraction of Tokyo: Shibuya, famous for flashing lights, dining and shopping, and The Scramble. You know The Scramble, even if not by name. It’s one of the busiest pedestrian crossings and has been featured in countless films, commercials, music videos, etc. Shibuya train station gives a pretty good view over the scramble, and it was there, while staring at this place I’d seen so many times before me, that it hit me: holy shit, I’m really in Tokyo right now! We went down and crossed a few times just for the sheer joy of it. I couldn’t stop grinning; it didn’t feel real.

After a pleasant wander through Shibuya and a stop for cheap yet delicious kaiten-zushi (conveyor-belt sushi) we went to Shinjuku, another hip downtown area of Tokyo. In Shinjuku we had another pinch-me-is-this-really-happening-right-now experience: cocktails and live jazz music at New York Bar. If you’ve seen the film Lost in Translation, then you are familiar with New York Bar, the swank jazz bar located on the 52nd floor of the Park Hyatt Hotel. We were worried they wouldn’t let us in. Supposedly there is a dress code and we were definitely not dressed for the occasion! But they seated us without a thought at a long bar with a view of the band and the lights of Tokyo, right next to where Bill Murray had sat in Lost in Translation. The setting was unreal, the band was fantastic, the cocktails weren’t cheap but were exquisite, and the people watching was amazing. The place was filled with characters, and we had a good time guessing who was staying at the hotel and who wasn’t, who was rich and who was, like us, pretending to be for one night. Who was that Japanese man, sitting alone, smoking cigars, and being chatted up by the staff? Was he someone important? Next to me was a drunk American, and spread out before him were plates of tapas, a whiskey, a coffee, and a bottle of Perrier. I don’t want to know how much his bill was! Unfortunately, when our own bill arrived I did feel a bit faint. New York Bar has a cover charge of ¥2,400 and cocktails are ¥2,000 each and I had a few of those. . . but it was such an incredible experience that I wouldn’t take it back! And I always prefer to spend my money on experiences. Those are priceless.

Rather than bombard you with information and give you a marathon reading session on my Tokyo exploits, I decided to split up this post into 3 shorter ones. Next time, Day 2: Tokyo National Museum, exploring the older Yanaka neighborhood, hanging out at my new favorite hostel, and a night on the town.