It was a perfect summer day, the kind where I would intermittently think to myself: “This feels like a dream”. I suppose this kind of feeling could happen anywhere, but it seems that since I’ve begun living abroad I have this sensation much more often. And truly, this particular summer day was like living in a nostalgic Japanese daydream.

Bea and Jae are my colleagues at the language school where I work, my next-door neighbors, and some of my best friends in Kanazawa. We are all city kids, so when Jae’s student Mariko invited us to come to the countryside for the day and visit a sunflower maze, it was too good an offer to pass up. Mariko is a native of this prefecture, and has many fond memories of visiting this maze annually as a child.

She picked us up bright and early on the hottest day of the summer, and soon we’d left the city behind and were following tiny Toyota trucks down country backroads between rice paddies and fields of lotuses. Before too long, we’d arrived at the sunflower maze. I’d never been to any sort of argicultural maze, so I’m not sure what I was expecting. Laid out before us was a seemingly endless field of towering sunflowers! We trundled along in a fairy world, stopping to take lots of pictures. It wasn’t easy to find the correct way out, and by the end of our time in the maze our shoulders were yellow with pollen and we were more than a little sweaty – did I mention it was a high of 36° C that day?!?!

I had thought when we set out that we would see some sunflowers, take some happy snaps, and that would be about it, but to my surprise and delight, the day had many more pastoral pursuits in store. Next we visited a famous dairy farm that’s been in the area since 1922. Inside the storefront selling milk and ice cream were various photos of famous Japanese people drinking milk from the farm! It was only 10 am, but naturally we had to sample this famous soft serve ice cream (“soft cream” in Japanese) as well. I had plain milk ice cream nestled on a bed of creamy pudding. I have no words to describe it except perfection. It definitely tasted like the milk had come from around the corner!

The trash can and bathroom at the dairy farm, shaped like cows 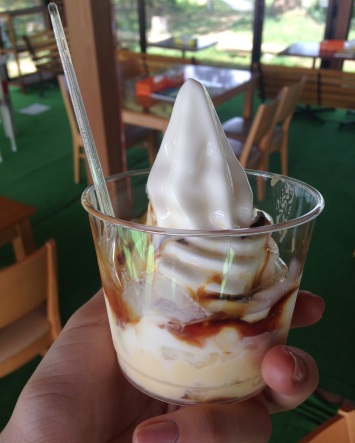 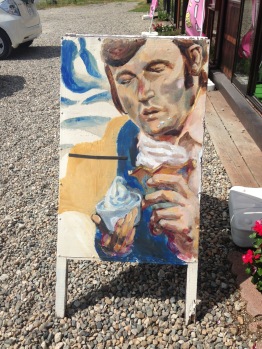 It wouldn’t be Japan without plastic food in the window!

This dairy farm boasted a corn maze, our second plant maze of the day. I hadn’t realized just how tall corn grows. I felt like a tiny field mouse. Once again we actually got lost, and the maze had cheeky signs with disgruntled food when you hit a dead end. Oh Japan, you and your signage. It’s endlessly entertaining. Also on the farm grounds were a few ponies, a goat that was only interested in people if they had carrots to give, and a friendship bell, which we rung of course. To friendship! 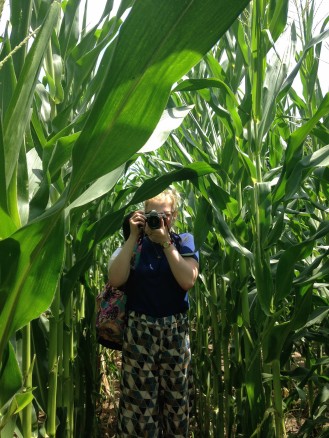 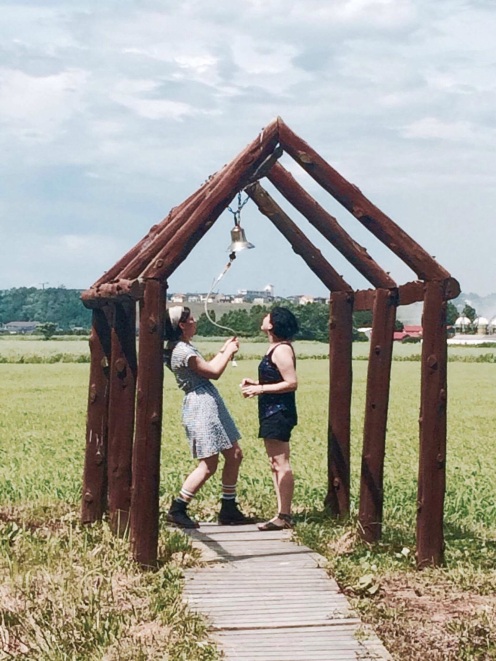 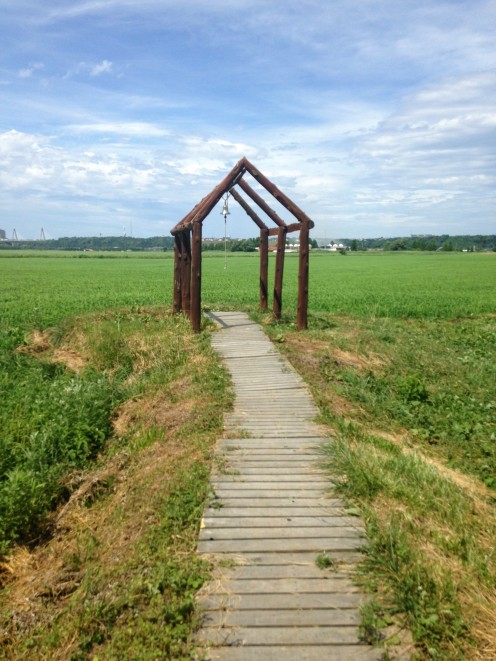 This area has a lot of dairy farms, and Mariko herself works at one part time, so she  gave us a mini-tour and introduced us to her boss. He informed us that he had actually spent a year in the US a long time ago, in Wisconsin, which makes sense given his line of work. We were all impressed by just how enormous cows are, and they seem to have pretty happy lives on this quaint little family farm. 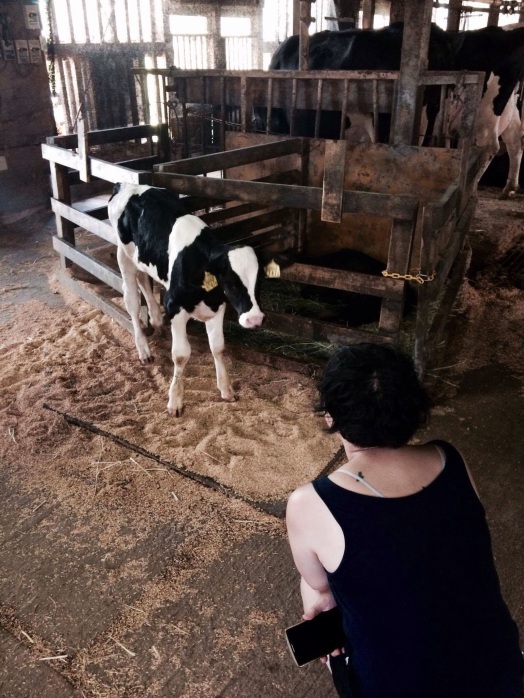 After our farm visit, it was getting near lunch time, so Mariko took us to her favorite sushi restaurant that she frequents with her grandfather. She mentioned that in recent years it had been getting very popular, and it was easy to see why! We each had a nigiri set consisting of 11 pieces of sushi. The meal was meant to be eaten in a certain order, starting with lighter, fresher fish like tuna, then moving to more toothsome dishes such as octopus, and ending with heavier offerings like a seafood carpaccio ship roll and sweetened baked egg. We ate at a low table on a tatami mat, and picked up the nigiri pieces with our hands. This is actually the correct way to eat sushi, so the whole experience felt very traditional and just perfect. “How is this real?!?!” Bea asked me.

Where to next? It was summer, and it was hot, so the beach of course! We happened to be very close to Uchinada, a famous beach area on the Sea of Japan, and in the middle of a Monday, we had it all to ourselves. I had heard from various people that this beach was dirty and not that great, but clearly I’ve seen much dirtier, because I thought it was alright and the water was fairly clear and striking shades of blue and green. We hastily took off our shoes and socks and were surprised to find that the water was not cold at all, and walked and waded in the shallows, the gentle waves lapping at our legs, tiny shells knocking about our ankles in the sand.

Our final stop of the day was back in the city at Leisureland, a giant entertainment complex housing arcade games and grab-it machines, billiard tables, and bowling. I’m definitely not the best bowler, but I enjoy cheap, nostalgic thrills, so I’m always down for a game. It seems, however, that many Japanese people take bowling quite seriously, or at least the crowd of stone-faced middle-aged men at Leisureland at 2 in the afternoon on a Monday. But our crew had fun and laughed a lot. Unsurprisingly I lost.

By the afternoon, the day had changed from hot and brilliantly sunny to cloudy and drizzly. A typhoon was on the horizon, and it was time to get home and back to the grind of city life. I took a lot of film photos that day, and I can’t wait to develop them and have more magical moments of our day in the country.