At last, there are buds on the tree branches, the remaining piles of dirty, icy snow have melted away, and spring is coming to Kanazawa. While I did enjoy my first snowy winter, it was long, cold, and dark, and I admit that it did catch me in it’s funk near the end.

With the coming of spring I’ve passed a special milestone: I’ve lived in Kanazawa for one year now, the longest I’ve been in any place since moving abroad. Taking my usual walk along the river yesterday for the first time since winter’s end, I was reminded of what a special place this is and how serendipitous it is that I have found myself here.

It truly has been a year of milestones and firsts, and I’ve kept the attitude that I adopted when I first moved abroad, of saying yes to new opportunities and not letting fear hold me back. So when my colleagues wanted to take a ski trip during the winter season, I said I would try it. Never mind that I’d never skied before!

Japan is famous for it’s mountains, and winter sports are popular pastimes. Lucky for us, Kanazawa is only a few hours away from the gorgeous Japan Alps, so after work one Saturday we packed up and drove to Hakuba. There were 7 of us, mostly foreign English teachers with one of our Japanese friends in tow. For the weekend we had rented a cottage that I had found on Booking.com, my go-to when hostels won’t do or Airbnb is too expensive. Campagne Hakuba, which I had originally misread as “Champagne Hakuba”, was a cute, A-frame cottage, but was still distinctly Japanese with tatami mats and futons on the floor in the bedrooms and heated toilet seats in the bathrooms. We settled in, and drank beer and played cards before going to bed.

The next morning we got up bright and early, tired from the night’s revelry but still eager to take full advantage of the day. We drove the short distance to Happo-one ski resort and were some of the first customers at Spicy rentals. I was initially shocked by the high level of English spoken by the guys at the rental shop, but it really shouldn’t have been such a surprise. The Japan Alps are not only famous within Japan, but worldwide, and during the winter season become flooded with tons of foreigners, particularly Australians, for whom Japan is much more conveniently located than the Alps of Europe or Rockies of America. After coming from a small city where tourism is still a relatively new enterprise, hearing English everywhere felt strange.

We rented our gear, walked to the slopes, and purchased our lift tickets. Then it was time to get the skis on. The minute I was snapped in, I was gripped by terror. I’d made a huge mistake. I couldn’t do this. What had I been thinking?!?!? Thankfully, my friends were so patient with me, and taught me the basics on a tiny slope next to the ski school. I don’t know how many times I went down that dinky slope. Once I was pretty confidant with going straight, we tried turning. I was having trouble getting the hang of it, but I kept trying. Down . . . turn turn turn!!! Uh, that didn’t really work. Try again. Trudge up the hill. Down. . . turn turn TURN!!! That was better. Try again. While I still felt kind of silly, with serious-looking skiers and children whizzing by me, my confidence was bolstered by the Englishman next to me. This guy had also clearly never skied, and was being taught by his lady friend and her incredibly patient father. Negative Nancy, however, was so convinced that this didn’t feel right and that he couldn’t get his head around it that he was really struggling. 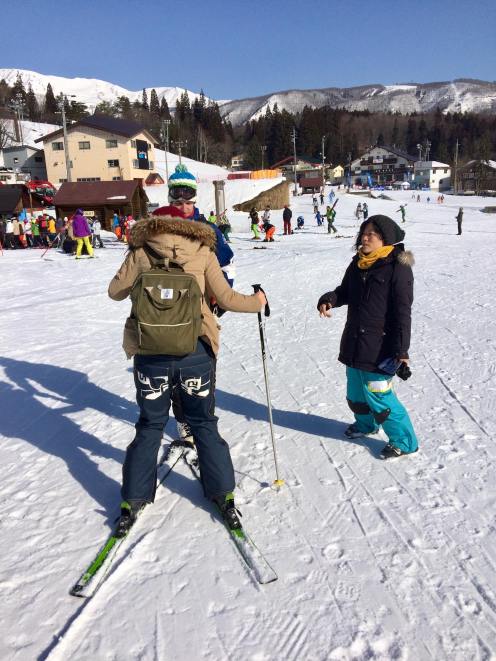 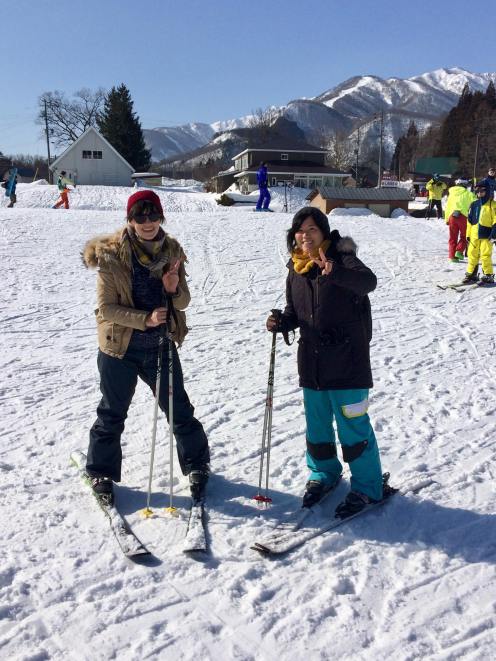 I may be smiling but I’m actually scared shitless. Photo courtesy: Beatrice Lord.

After well over an hour on the tiny incline, the rest of our friends joined us and suggested we all try the easiest run together. I was hesitant but agreed.

“Let’s go now before I change my mind!”

Riding the ski lift was fun, even if getting on and getting off was a little stressful. Then came the real challenge: the first run.

Now, the area that we were at didn’t really have a “bunny” slope. What we were about to do was marked for beginners, but my friends told me that it was actually more of a middle-beginner than a true beginner level. Oh great. 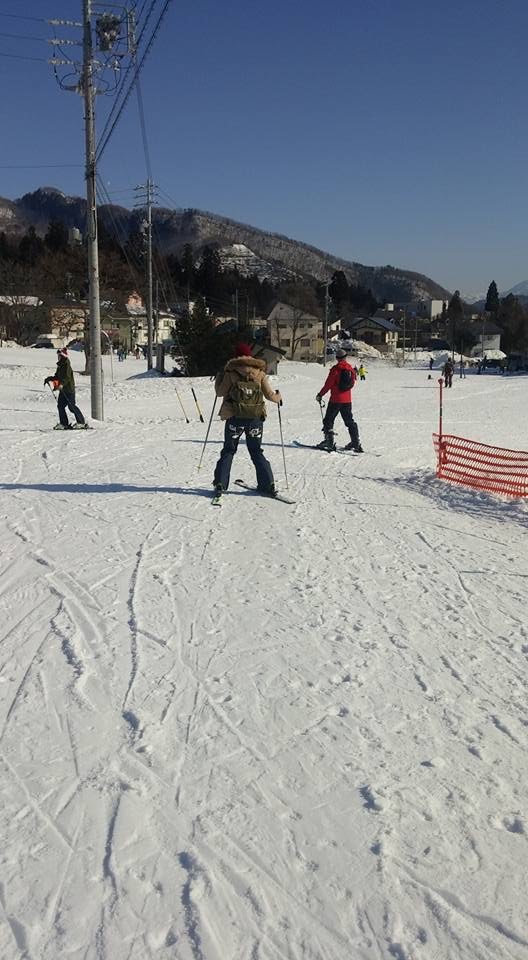 I lasted about thirty seconds before I fell down. Hmm. Maybe this would be a bit more difficult than I had thought. Another thirty seconds, another fall. And it was like that most of the way down. I would go straight, manage one turn, go straight, then try to stop or turn again, feel myself pick up speed, freak out, and throw myself off balance and tumble into the snow. I quickly got good at untangling my skis and pushing myself back up. I also started to get frustrated with myself, and about two-thirds of the way down had a little angry cry. Why couldn’t I get this? Why was I so afraid? It was all in my head, I knew I had the physical capacity for it. But it was no good crying about it, the only way down the mountain was to keep going, so down I went.

After lunch we tackled the same run another time. While I still fell a lot, this time it felt more comfortable, and went much quicker than the first time. I was surprised. I was getting better. I agreed to a third run, one that began higher up the mountain but eventually met up with the run we had already done.

The views from this lift were incredible, and though I was already quite tired from the day’s events, I was excited to try one last time. Initially, my progress down the run was pretty similar, but I found myself going a bit farther between falls and I didn’t feel frustrated by them. One of my friends suggested holding my poles horizontally in front of me, to help with my balance, which was a great suggestion. Further, she thought it would be a good idea to hold them against my legs, so I didn’t lean back and throw myself off balance. That was even better. 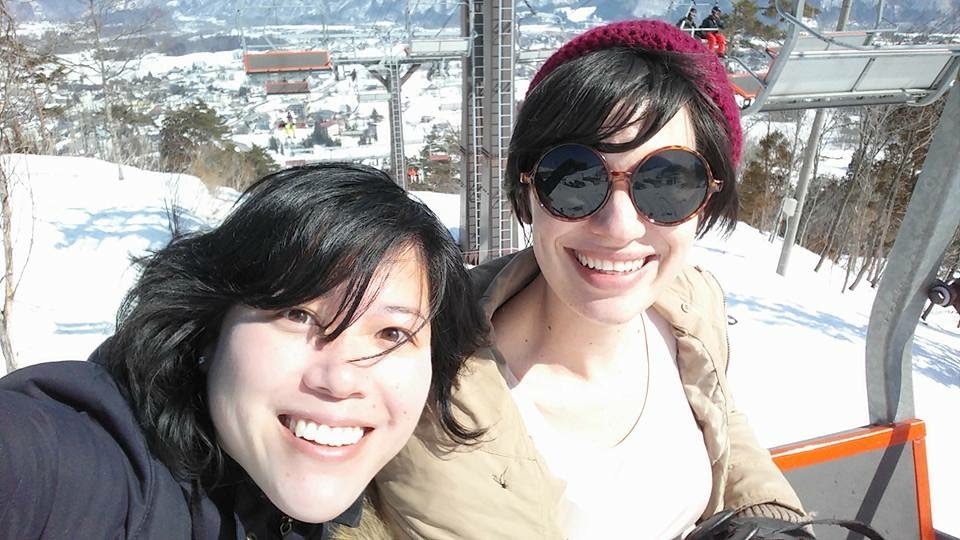 The higher ski lift. Check out the views behind us! Photo courtesy: Jenny Lee.

Once we joined back with the original run and I was in familiar territory, suddenly everything clicked: I had this. I touched my poles to my legs and leaned forward, sliding down the mountain. I zigged left and right, gracefully mastering turns and dodging other skiers, the trees at the edge of the slope whizzing by. All of my fear was gone, and I was purely in the moment. It was miraculous. It felt like flying.

I still didn’t really know what I was doing, though, and lost control of my skis and spectacularly wiped out into the snow, not far from the site of my angry cry a few hours earlier. I triumphantly raised my fist in the air, and heard my companions hollering in excitement. I’d done it. I’d really, actually skied.

I was exhausted, but rode the rest of the day on a euphoric high, through the apres-ski beers at a strange slope-side bar, the blissful onsen soak, the Korean barbeque dinner followed by cocktails at a cozy bar packed with other foreigners and hippie art. Everyone was tired from such an exerting day, and we were back at the cottage and in bed by 11 pm. The next day we made a lovely pancake and french toast breakfast, but it was raining and we were still spent from the skiing day, so packed up and headed back to Kanazawa much earlier than we’d planned.

Mariko in the snow, post-skiing. The feeling was mutual! Shot on iphone.

All throughout this first year in Kanazawa, and the past two years abroad, I’ve continually challenged myself to try new things, seize the opportunities that present themselves, and not let fear hold me back. When I was young I was afraid of everything. I don’t know when or how, but I managed to stop being afraid, or at least, to not the fear control me. When I first put on the skis I was so completely terrified that I wasn’t sure I would be able to do it. It sounds kind of stupid, but there you have it. If I had stopped then, when I was afraid, then I would never know what it feels like to fly. 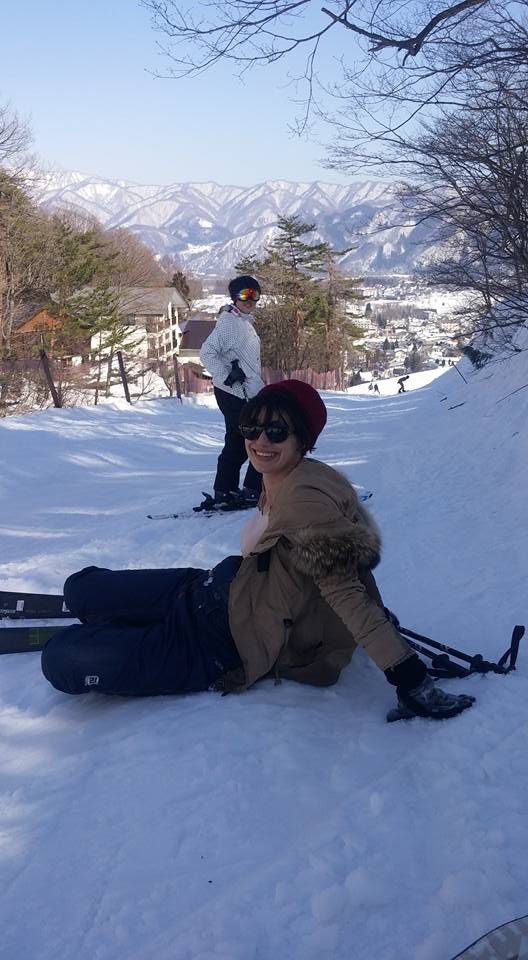 This was taken after probably my 87th fall, before I’d fully gotten the hang of it. But I was still pretty happy with what I’d accomplished! Photo courtesy: Jenny Lee