It goes without saying that a visit to Hiroshima is incomplete without a visit to the Hiroshima Peace Memorial Park. Indeed, it is hard to even say the name “Hiroshima” without thinking of one of the worst tragedies in history, and before visiting I really didn’t know much else about the city, and I was curious. How does a place rebuild itself from an event like this, and what new identity does it take on as a result?

The Hiroshima Peace Memorial Park is huge, encompassing a museum, memorial hall, and many monuments and statues. There is so much to see and take in, and it is definitely worth dedicating a day to.

If entering the park from the north, as we did, the first thing you see is the Atomic Bomb Dome. Originally the Industrial Promotion Hall, this grand building from 1915 was one of the few left standing near the epicenter of the bomb and was declared a Unesco World Heritage site in 1996. To have this twisted, naked shell of a building be the first thing one sees in the park is a powerful reminder of the horrors of what people are capable of. 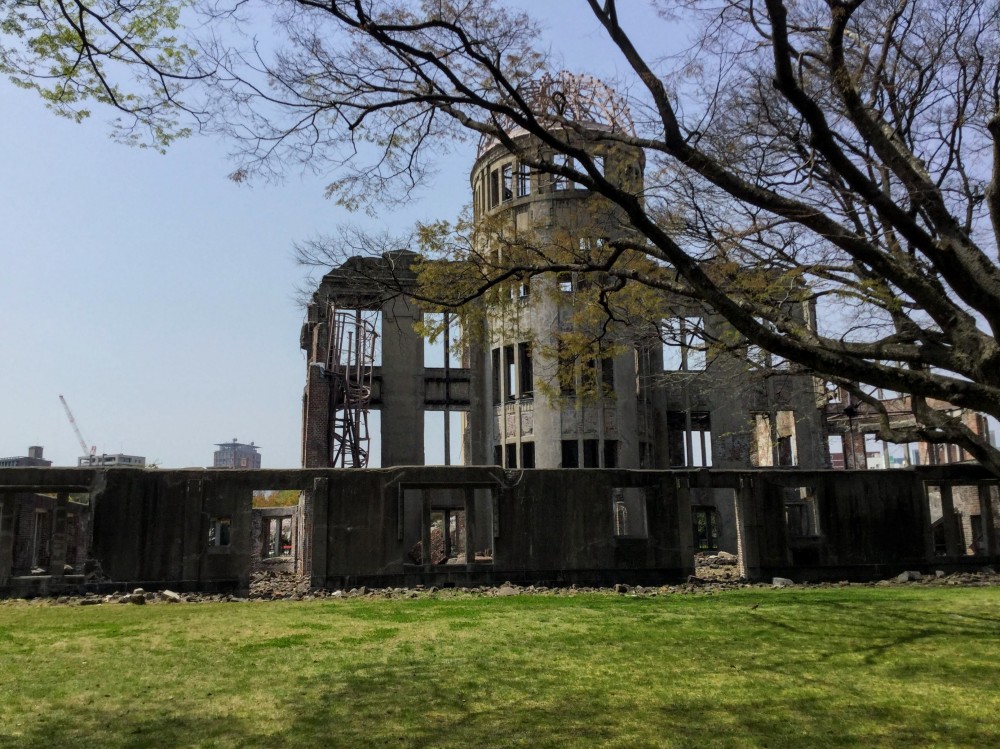 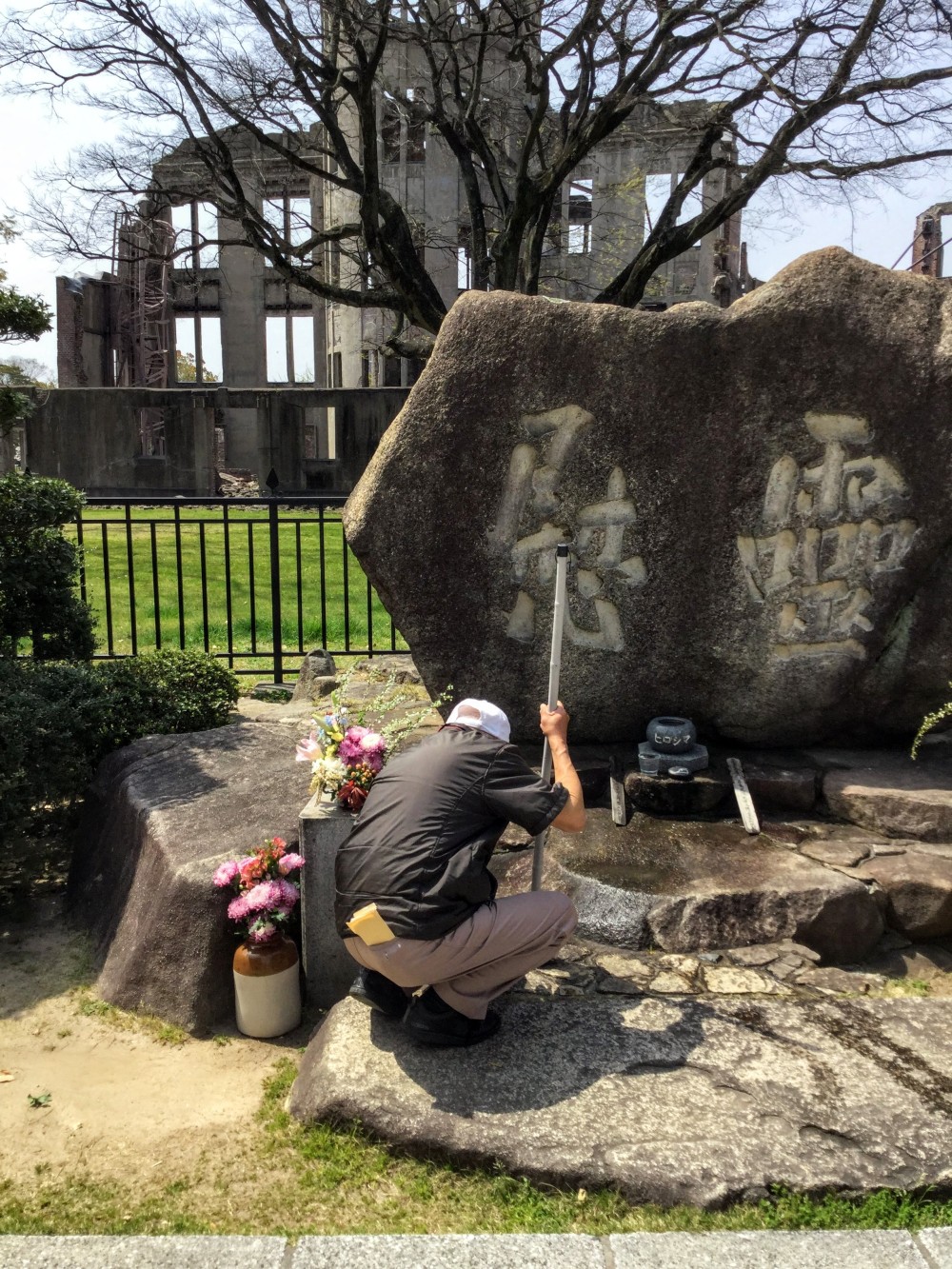 Throughout the park, there is a large focus on the victims and human cost of the bomb. One of the most memorable tributes to this is the Children’s Peace Monument, inspired by Sadako Sasaki. I remember Sadako. When I was in elementary or junior high school, we read a novel about her story that has stuck with me. Little Sadako was two at the time of the bomb and survived, but later developed leukemia when she was eleven. She decided to fold 1,000 paper cranes, believing if she did so she would get better. Sadly, she didn’t, but her classmates folded the rest after her death.

The sculpture itself is lovely, but I was equally captivated by the mosaics and sculptures made from paper cranes that surrounded it and have been sent to Hiroshima by school children from all over Japan. 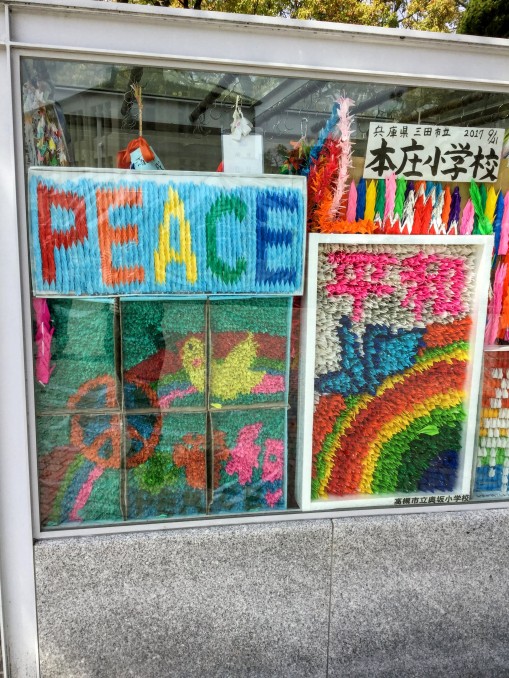 Mosaics made from paper cranes 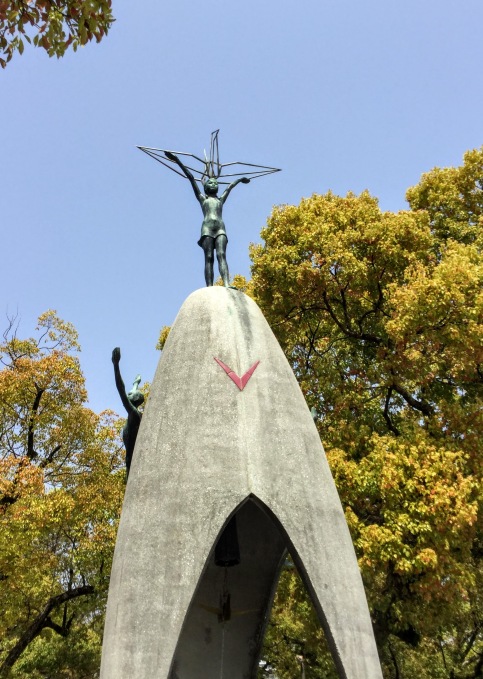 Another poignant monument is the Pond of Peace. At one end of the pond is the Flame of Peace, which will burn until all nuclear weapons have been destroyed. At the other end is the cenotaph, a concrete memorial containing all the names of the known victims of the bomb attack. If you stand in front of the cenotaph and look directly through its arch, you can see the Atomic Bomb Dome, clear at the other end of the park. 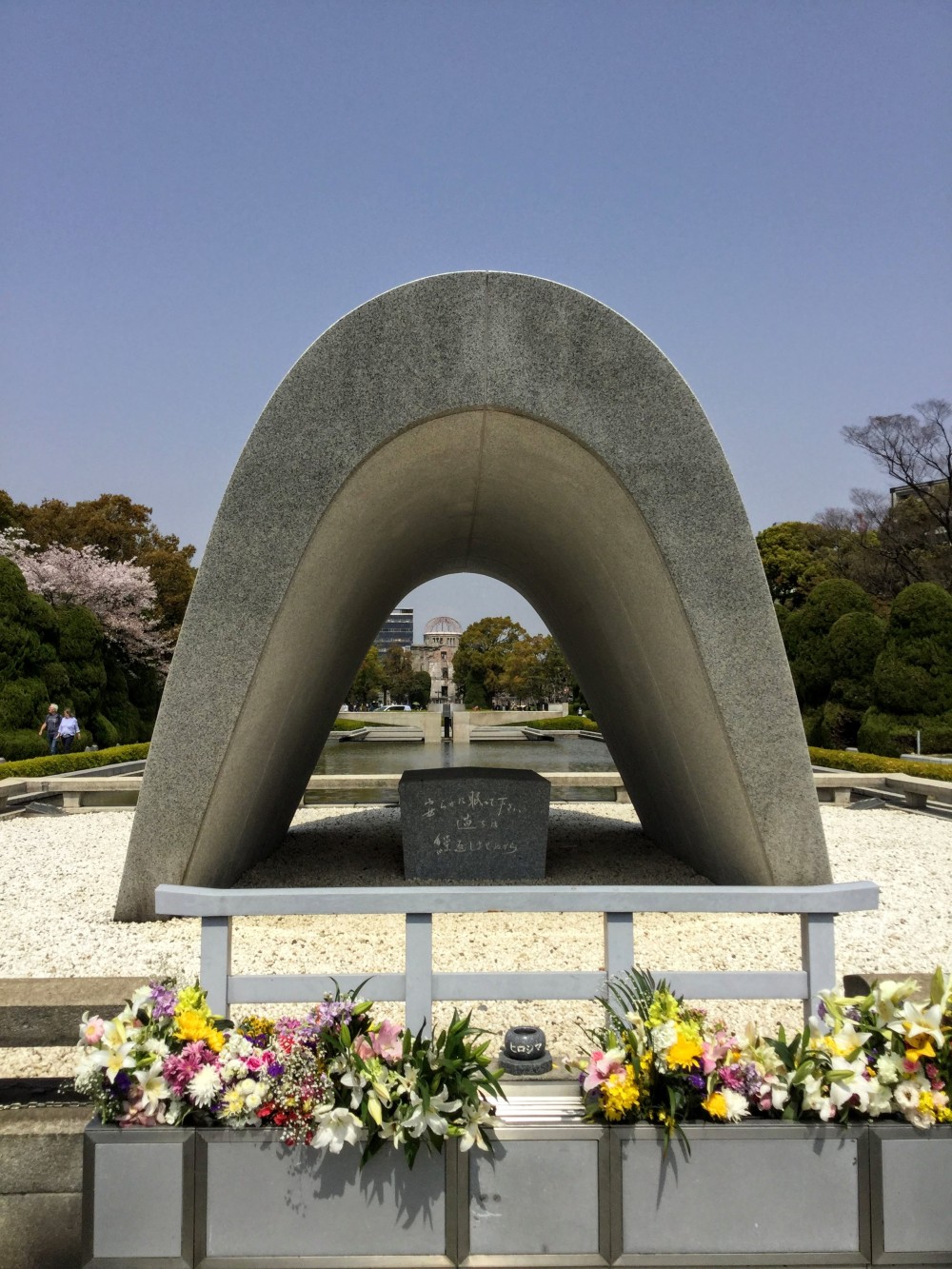 The cenotaph. Through it, you can see the Pond of Peace and the Atomic Bomb Dome.

My personal favorite monument was the Peace Memorial Hall. The hall is entered through a dim, sloping walkway, the walls lined with plaques giving various facts about events leading up to the bomb and it’s destruction. I was impressed by the thoughtfulness and truth put into these plaques. Japan is incredibly nationalistic and has a way of blinding itself to less savory events in its past, such as its colonization of Korea or invasion of Manchuria, but clearly the planners of the memorial hall were striving for accuracy by stating that some bomb victims were from other Asian countries and some of these people were conscripted, as well as by admitting that Japan had made some “misguided” judgments during the war.

The actual hall is just as well-executed. The hall is circular, with a fountain in the center of a clock face reading 8:15, the time of the bombing. Supporting the ceiling are twelve pillars, also symbolizing time and the linkage between the time of the bomb and the time we live in today. On the walls are a 360° panorama image of the bombed city, made up of 140,000 tiles for the number of known victims at the end of 1945. To say this is an impressive and thought-provoking space is an understatement. It eloquently underscores the level of destruction and human cost of this terrible event. As you leave the hall, a series of photographs and names of victims scrolls on the wall of an adjoining room. It feels never-ending. 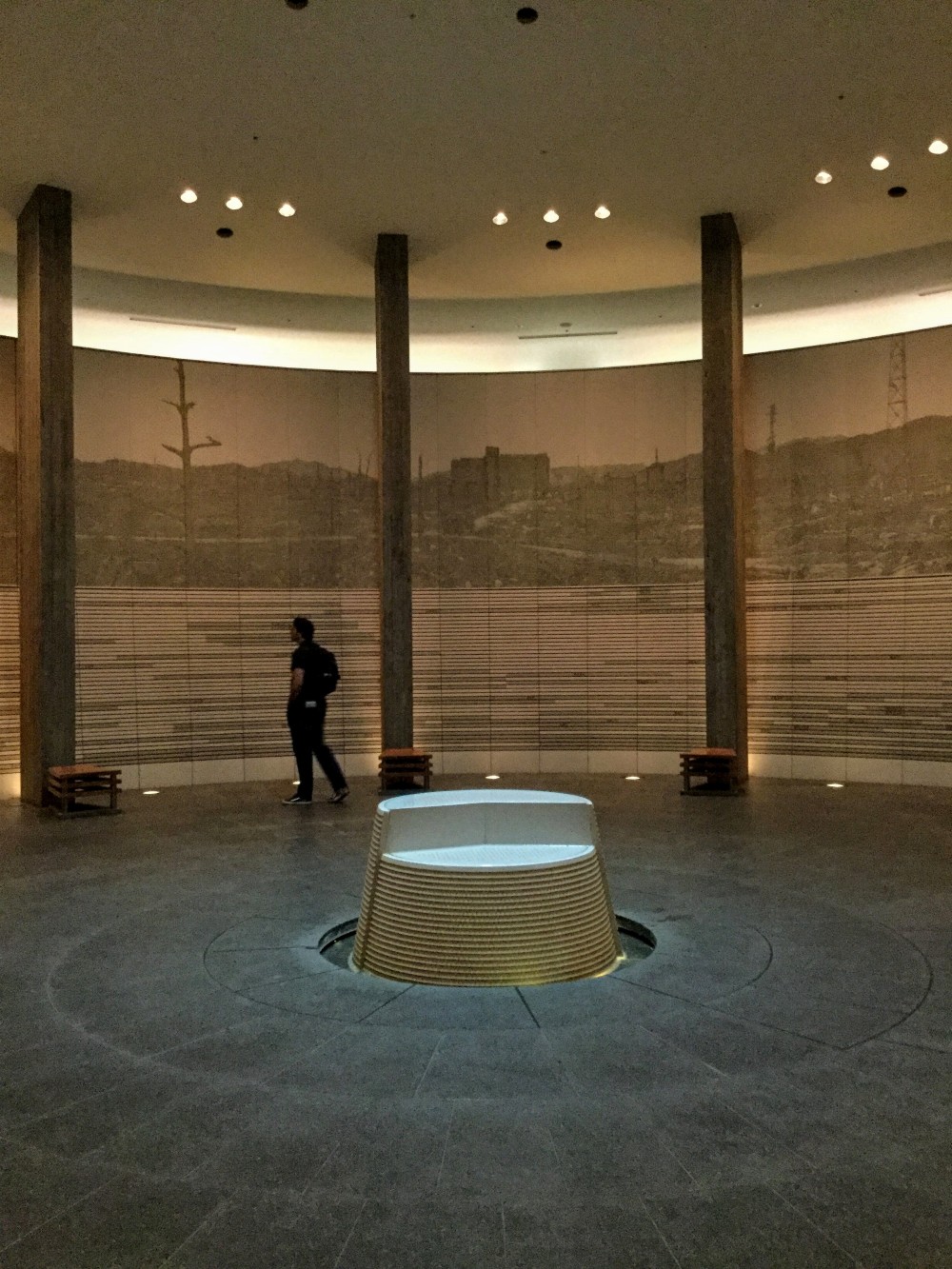 Inside the Peace Memorial Hall

But the main event in the Peace Park for most visitors is the Hiroshima Peace Memorial Museum. The museum is currently undergoing an extensive renovation, but at the time we visited we were still able to see a large portion of it. It was crowded when we went on a Monday in April, so I admit I skimmed through some of the factual sections on the history and science of the bomb. As an American, I had already studied a lot of this at various points in my education, but I was surprised to find that my British companion had not known much about Hiroshima at all before we went. Most of her WWII education had concerned Europe and the Nazis. So for those unfamiliar with the history of the atomic bomb or the Pacific front in World War II, the museum gives a lot of extensive and useful information.

The most memorable exhibit in the museum includes items salvaged from the bomb wreckage and eyewitness photographs that many will find upsetting. Viewing these items, such as marbles and pottery that has melted and fused together, a watch stopped at 8:15, and tattered clothing, really affects the viewer with a sense of the sheer destructiveness of the bomb. It’s not fun, but important to see.

So after all of that, what of my other mission, to see the new Hiroshima? While I think two days was far to brief to really discover the city beyond the tragedy, I did get a sense of a laid-back, cosmopolitan place where people work, study and live their lives despite the history of their surroundings. It’s a beautiful place, with streets interrupted by lovely, tree-lined canals where the whole city seemed to be enjoying picnics beneath the seasonal cherry blossoms. I was impressed by the infrastructure of the city as well, with a great tram and train network to get around. As a port city, Hiroshima also has something of an international vibe. As well as eating the famous local cuisine of Hiroshima okonomiyaki (savory pancakes stuffed with noodles), we had amazing Mexican food, bagels and pasta. If given the chance, I would return in a heartbeat to spend some more time simply enjoying the city. 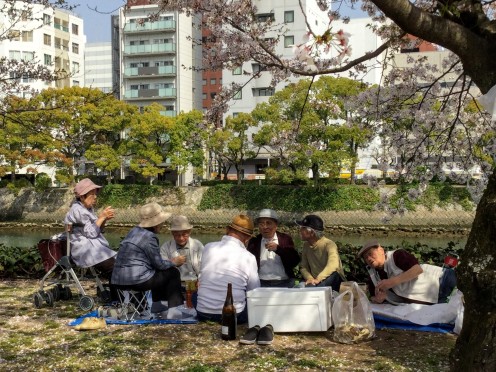 Senior citizens enjoying a picnic by a canal. 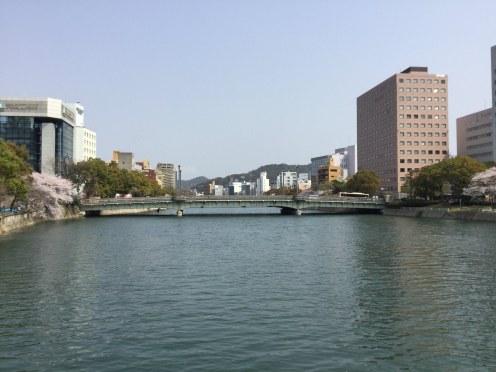 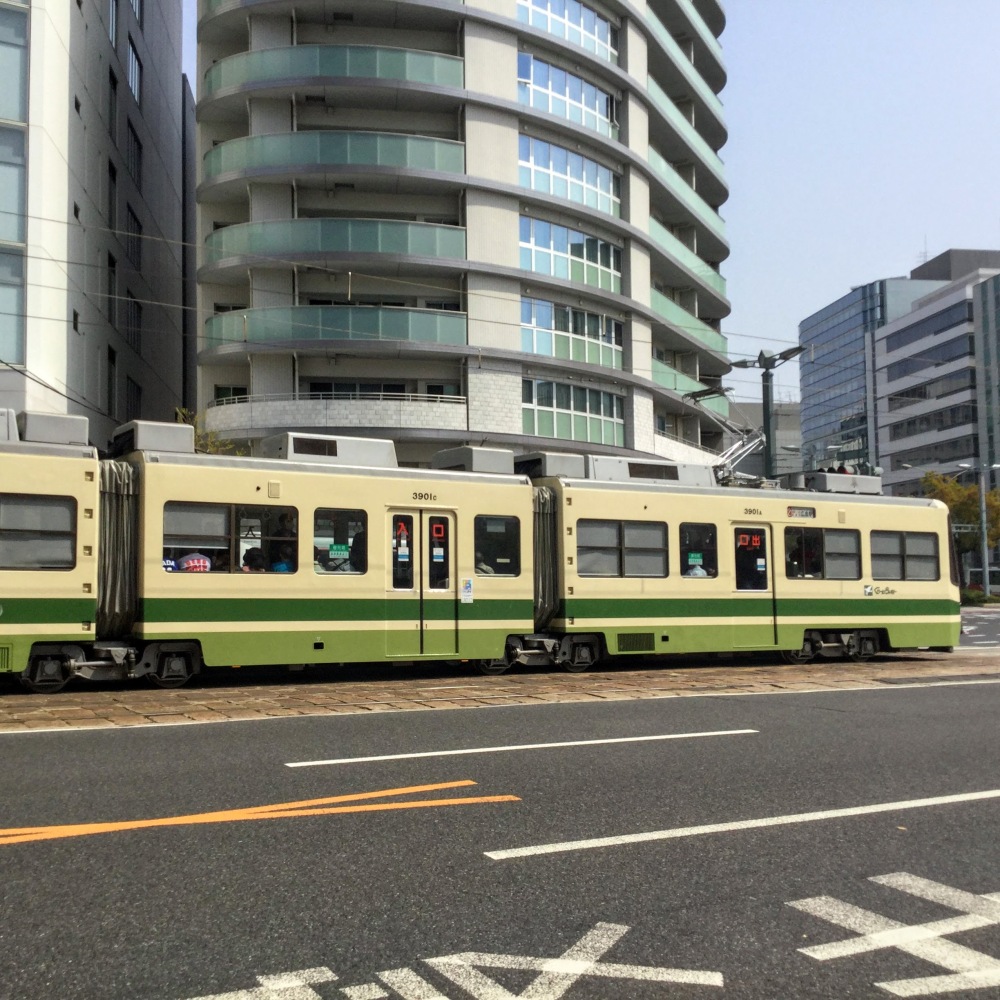