Before visiting South Korea, I don’t think I’d realized exactly how much living in Japan had affected me. While there is no doubt that I’m Western, and often find myself inhabiting the role of the awkward, bumbling white person (a fellow English teacher says it’s like being Mr. Bean every time you go out in public), I have also absorbed a good number of Japanese mannerisms. The way I bow when I greet someone or say “sorry”, the affectation I put in my voice when ordering food or making a purchase, the side of the street I walk on, the way I try to make my body take up as little space as possible on a crowded bus; these are all habits I’ve picked up in Japan.

It should go without saying that Korea is not Japan and has different customs. However, I think I subconsciously expected the two to be more similar than they actually are, and spent the first few days of my trip having my mind constantly blown by the differences. As such, the following first impressions are very much in comparison to Japan, because hey, that’s my life right now.

From the moment I stepped off the plane into the airport, I was struck by how sleek and modern Korea was, a feeling that continued as I rode the smooth, comfortable airport train into Seoul. Throughout my visit, I was constantly impressed by fabulous new architecture, the credit and debit card-based economy, and the way young Koreans have adapted to and reinvented smartphone and app culture. These first-world comforts might sound standard for any contemporary big city – but surprisingly, are lacking in Japan.

While Japan has a reputation for cutting-edge technology, and does deserve this stereotype in some ways, in others it is seriously behind the times. I have never been to a first-world country where economy and business are still largely cash-based and operate with huge amounts of paperwork, until Japan. Many of my students don’t really know how to use the internet or smartphones, and use older internet technologies and web browsers, such as Yahoo! (who still uses Yahoo!?) Yet in banks, cafes, and the train station, it is not uncommon to be greeted by a robot. What gives?

My thoughts on this have to do with the modernization of the countries. Japan’s modernization came much earlier than Korea, so for a long time it was the leader of technological advancement, but at some point it seems to have stopped there. Korea has had such a late modernization and economic boom, that it had some serious catching up to do, which it seems to have done in spades. This isn’t to say that all of Korea is shiny and modern; in between the big cities you will find plenty of rice fields and villages, and some of the bathrooms I used reminded me more of the middle east than Japan, but for me, that keeps things interesting. An English teacher I met said he felt like Korea is “a poor man’s Japan,” but I find that statement to be quite shallow, and didn’t see that at all during my stay. 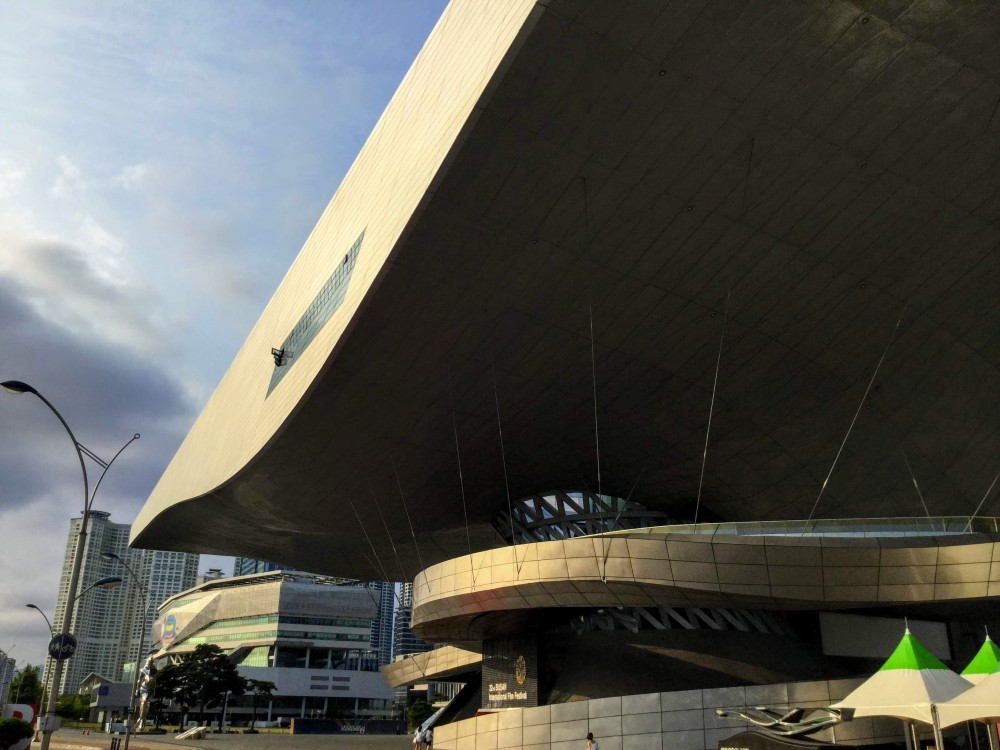 The Busan Cinema Center, home of the Busan International Film Festival and boasting the longest free-standing cantilevered roof in the world. Shot on iphone.

In the airport and on the subway, I felt myself being constantly jostled and bumped by other people. At first I found this a little alarming and pretty irritating. My brain silently screamed: “I’m here, dammit! Can’t you see?!?” I had gotten so used to the Japanese regard for personal space (rush hour in Tokyo notwithstanding) and the compulsion to apologize profusely to someone at the slightest bump. But I realized that the disregard for personal space didn’t have anything to do with rudeness; it was simply that Koreans gave less of a fuck. I got used to it, and probably bumped a few people myself before the end of the trip. 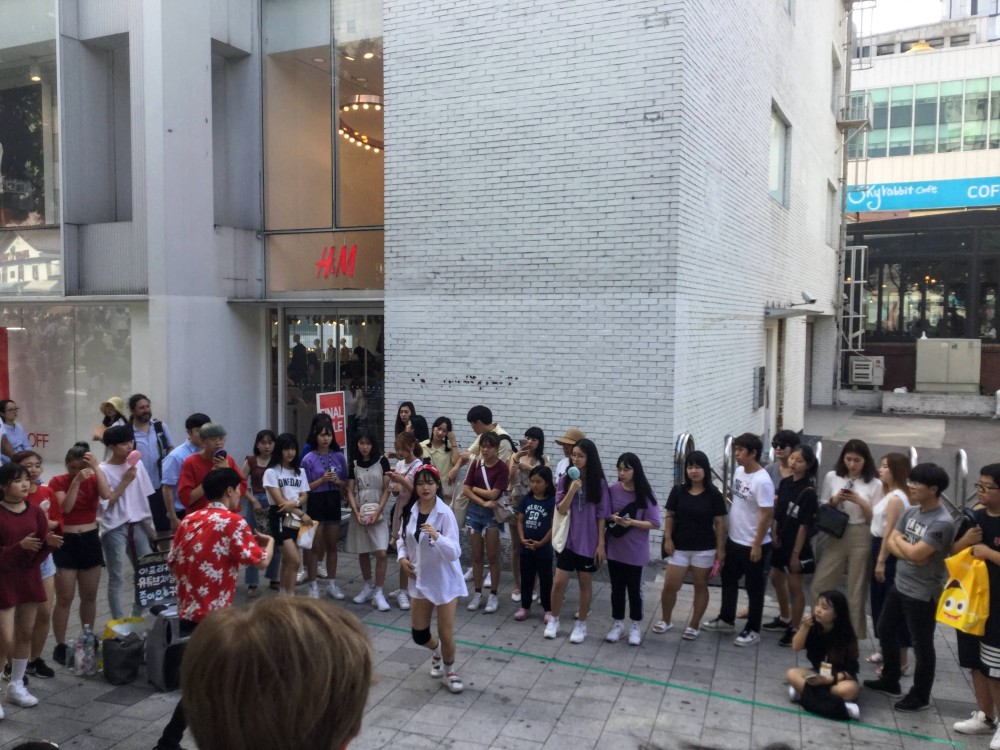 Expect a lot of jostling in the crowds in Hongdae, where young Koreans come to shop and watch each other perform Kpop routines. Shot on iphone.

I traveled to Korea in August, the height of the summer season, and naturally everyone was in a holiday humor. Men were in shorts, women in sundresses and sandals, and romantic young couples were running amok. It seemed like everywhere I was, there were couples cuddling, holding hands, arms around each other, being affectionate.

This probably doesn’t sound like a huge newsflash, but in Japan, the Public Display of Affection does not exist. Ever. Maybe a chaste handhold. The only times I every see amorous couples, they are drunk and taking the last bus home, and no one gives a fuck on the drunk bus because everyone else is drunk too. So I was floored by the amount of PDA I saw in Korea. I tried not to stare but I couldn’t help it, it was everywhere.

Overall, I found Korea to be a more affordable country than Japan in many ways, but as I find transportation to be the most expensive thing about living and traveling in Japan, the affordability of it in Korea constantly blew me away.

Riding the KTX, a fast, convenient, and affordable way to get from Seoul to Busan. Shot on iphone

When I travel, I usually strive to be a considerate guest, and learn a few words of the local language. But I admit that, while in Korea, the only things I managed to get down were “hello” and “thank you” (though I did learn how to read in Korean, which was pretty useful!) Part of this was that my brain appears to be so full of Japanese that it was hard to get Korean to stick, but a bigger part was that most of the time, I didn’t need it. Almost every Korean person I encountered, from airport staff to people in shops to my hairdresser, spoke some English, and most spoke great English. While this is not necessary for an enriching and amazing travel experience, it does make things a good deal easier, and allowed me to have meaningful conversations with a lot of the locals that I met. Granted, I was only traveling in cities, where English might be valued and taught more, but I was impressed at the level of the people I interacted with.

English has been taught in Japan for around 40 years now, and yet you’d be surprised at how low-level the majority of speakers are here. This is not me being judgmental; as an English teacher I’ve observed and experienced this. By comparison, English education in Korea is much newer, yet the level of the speakers is much higher, another way that Korea has quickly made up for its late modernization and entry as a global player. A lot of this probably has to do with the archaic Japanese education system, which is thankfully undergoing reforms in anticipation of the 2020 Olympics. And while I realize that the Korean education system is not perfect, and heavily favors testing, scores, and cram schools like the Japanese system, clearly their English education is more effective.

Whilst getting my hair cut at popular chain Juno Hair, I had a lovely conversation with Moon, my stylist, who spoke great English. Shot on iphone.

As I stated in my last post, I went to South Korea not so much with expectations, but a desire to finally see a place I’d been flirting with for the past seven years. As a traveler, I found it a dream destination. Affordable, easy to get around, delicious food, beautiful sights, a lively atmosphere- it checks a lot of boxes. More than that, there was also a mood, a pulse, a vibe that I really enjoyed. Two weeks later, I’m still having trouble expressing what exactly it was that I found so compelling. In my next posts, I’ll try to dive a little deeper into the three destinations I explored: boisterous Seoul, laid-back Busan, and funky Jeju.