One of the sheer delights of expat living is exploring not just the famous landmarks of a place, but the small, local attractions that are easy to miss as a traveler passing through.

Kanazawa is situated at the base of the Noto peninsula, a small stretch of land jutting into the Sea of Japan. At the farthest tip of this jagged coastline lies Suzu, which, according to Wikitravel, is the smallest city in Japan. Since no train goes to Suzu and the highway bus takes forever, it is highly unlikely to visit Suzu as a casual traveler. However, this isolated, tiny place boasts a few local charms: salt farming, it’s own style of pottery, and a giant rock that looks like a battleship. This year, Suzu was further put on the map by hosting the Oku-Noto Triennale, an international art exhibition held annually over 5 weeks in September and October. September 23rd was Autumn Equinox, a national holiday in Japan, and my colleagues and I had the day off from work. What a great opportunity to head north and see some art!

To get there, we decided to rent a car. Renting a car in Japan is ridiculously easy – if you have an international drivers permit. Don’t even think about trying to rent one if you don’t have this document, as the Japanese are such stickler for rules. I have one that I use for work, so the car rental process was a breeze. We used Times car rental, right next to Kanazawa Station, and I was able to make the reservation in English on their website. The car was comfortable, tricked out with a good navigation and stereo system, and had tons of high-tech safety features (the mirrors alerted me when cars were passing my blind spots! Nifty!!!). For the day, the rental was ¥97 (around $85), so split between 5 people for the day, this was completely reasonable.

One thing I actively miss about California is driving. Not city driving or stuck in traffic driving, nobody misses that, but going on a road or day trip, windy roads, beautiful scenery, tiny towns, rest stops, windows down, good music on, good friends in the car – this I miss. It was a two hour drive up to Suzu through dense green forests and along the rugged coast, and I enjoyed every minute of it.

Our first stop was to see Mitsukejima, an uninhabited island that is also called Battleship Island (Gunkanjima). It’s a pretty impressive sight, this huge, vertical rock jutting out of the water. There is a rock “path” leading out to the island that is accessible during low tide. We attempted to cross it, but only made it halfway as it was actually pretty difficult to traverse and slippery in places. During one stumble I thankfully saved my camera, but dropped my sunglasses in the water. Like the heart of the ocean in Titanic they quickly sunk out of sight into the murky depths. That seemed a good enough sign to turn around and head for shore. On the shore near Mitsukejima, there is also a “friendship bell” that serves no purpose but people enjoy ringing. 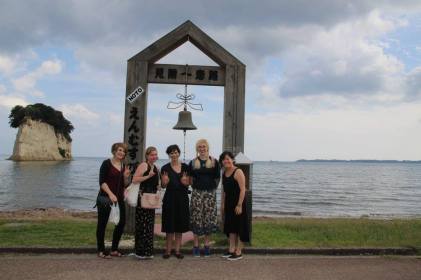 Our crew with the friendship bell. Photo courtesy of Jenny Lee.

The Oku-Noto Trienalle consisted of a huge variety of artworks, installations and galleries spread across Suzu. To visit the pieces, you could purchase a “passport” for ¥2,500 yen that allowed access to everything, or pay per exhibit for ¥300 (more for performances or special events). It was already early afternoon, and we weren’t sure how much we’d be able to fit in, we so opted to pay per piece. An important mission of this year’s show was for artists to discover the unique charm of Suzu and it’s people, and the 4 installations we saw all did an incredible job of rediscovering old, forgotten places around town and reinventing them.

Tatsuo Kawaguchi’s Small Lost Article Museum was a charming tribute to the small things in life we lose and forget. Located at a defunct train station, a trail of forgotten umbrellas led the way to an empty train car. The interior of the train car was completely covered in chalkboard, and visitors could use the chalk to leave a message behind. In the tiny station office was a room displaying forgotten items on the walls – which had been completely covered in yellow paint, rendering them nearly invisible. These small things are easy to forget, but the museum certainly wasn’t! 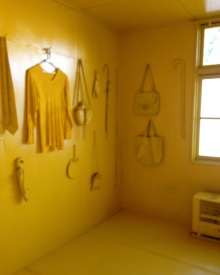 The lost articles. Shot on iphone. 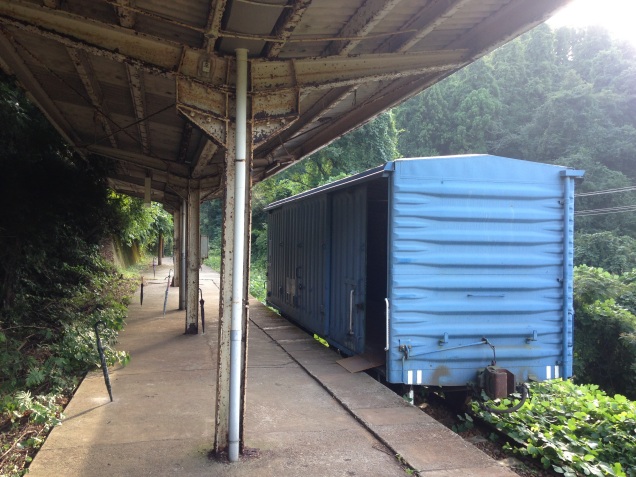 The train car and umbrella trail. Shot on iphone.

Ohji Yoshino’s JUEN: Time Flies was my favorite of the day. Yoshino’s work focuses on site specificity and incorporate wooden sculptures of farm animals and sea creatures to highlight the relationship of humans with the environment and natural climate of regions. This installation was a re-imagining of Bar Juen, an old bar with living quarters below. Each room in this traditional building had been transformed using lighting and wooden sculptures into an under-the-sea fantasy land that felt like the film set for a dreamy surrealist film. It was so well-thought out, so simple, and so effective.

Tower of glasses. Shot on film. 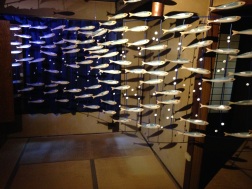 School of fish. Shot on iphone. 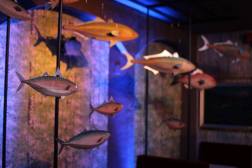 “Cabaret in Preparation” at World’s End was a very different piece by a unique artist that goes by the name Eat&Art Taro. Originally a chef, Eat&Art Taro’s work combines food, culture, and experience. “Cabaret in Preparation” didn’t seem like much at first, just an old, retro performance space literally in preparation for that evening’s show, but enjoyment could be found by lingering in the space. We were approached by a friendly young bartender in a bow tie and stayed for a drink of local Noto sake, relishing the inviting atmosphere, the ocean view through the wide windows, and the good company of each other. Leaving the cabaret was done through the dressing room, where viewers were invited to try on costumes and take photos. Such a delightful surprise!

Behind the bar. Shot on iphone.

Exit through the dressing room. Photo courtesy of Jenny Lee.

As the sun was going down, we had time for one more piece. Tobias Rehberger’s Something Else is Possible consists of a huge rainbow linear sculpture perched on a mound of dirt at the end of a field. Across the way, at the end of a set of disused railroad tracks was a neon sign, proclaiming that “Something else is possible”, which could be viewed through a pair of binoculars inside the sculpture or by walking along the train tracks. I admit, this was the piece I connected to the least, but it was quite striking to see at twilight, except for the massive amount of flies buzzing around the field. 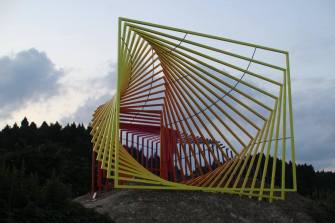 Something Else is Possible. Photo courtesy of Jenny Lee.

Peeking through the binoculars. Shot on iphone.

Once the sun had gone down, our intake of local art was finished for the day. We had a few other small adventures, stopping at a bathhouse and a friendly izakaya, before driving back down to Kanazawa. Like I said, most people probably won’t make it up to Suzu and the Noto Penninsula, but for those of us that do, it is well worth a wander.