After Kraków, our journey into the past continued eastward, taking us to Lublin, Poland. There, we couchsurfed with Alex, a gay, Russian, 40-something software developer who is really into games and brewing his own cider and apple liquor. While Lublin has many of the same draws as Kraków (a castle, a quaint old town, some Jewish history, churches, etc.), somehow it pales in comparison. It just doesn’t have the same sparkle or beauty, and has way more “bro” Polish men. But that was OK, because we weren’t really there to see Lublin, we just needed a place to stay that was close enough for a day trip to Włodawa, a small town on the border between Poland and Belarus.

After a morning coffee with Alex, we headed to the bus station for our journey to Włodawa. While people in Lublin spoke much less English than they had in Kraków, they were still eager to help us out, and a few different characters pointed and hollered to help us find the right place to wait for our mini-bus. The ride was 1 1/2 hours and crowded, but beautiful. We passed lush forests, farmhouses with assorted crops, and harvested fields with bales of hay standing sentry. The weather was moody that day, with wind and clouds that blew in and out.

Polish fields with bales of hay

My first impression of Włodawa was that it was small and quiet, but a little strange and sad, while still retaining the beauty of a provincial Polish town. The town has a dark history, as it’s large Jewish population was rounded up several different times during the 1940’s and taken to Sobibor, a Nazi concentration camp. My travel companion’s grandmother was born there, as was his late 4th-cousin, whom he had known while he was still alive. These were the only two family members that left in time; the rest died in the Holocaust.

It didn’t take long for us to begin to see shadows of this past: within 30 minutes of arriving in the town, we walked through a park that was built on a destroyed Jewish graveyard, and gazed upon an empty sports field where the town’s Jews were rounded up and held before being sent to the camps.

A mural outside the Synagogue

We walked for a long time, by houses with huge gardens with flowers and vegetables, past roadside Catholic shrines, and along the Bug River, with Belarus on the other side. I loved being by the river, it was so peaceful, so lush, so beautiful, so easy to forget. A farmer with a cow passed us on the road, as did many people with bicycles. One well-dressed old couple rode by. She was wearing a purple skirt, white blouse, and low black pumps with stockings, while he had on an argyle vest, tweed coat, blue jeans and a black beret. I imagined it was the 40’s and they were young and carefree, riding off to work or a riverside rendezvous. We walked by an old Greek Orthodox church, but it was shut tight, but whether it was from disuse or for renovations or simply because it was midday on a Tuesday I’m not sure.

A gnome in a garden 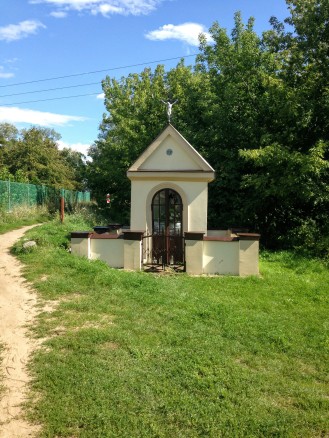 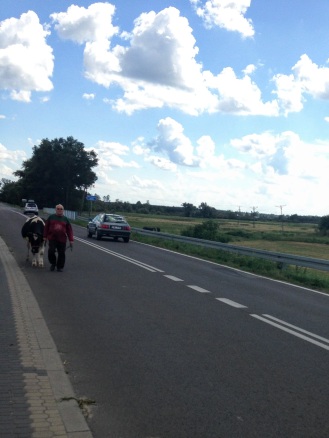 The farmer and his cow

Finally, we had made it to the main sight we’d come to see: the synagogue. I affixed the kippah we’d bought in Krakow to my companion’s head and we went in. It was quite beautiful, with a lavishly painted interior and grand central bima (platform for reading the torah) that is typical of Polish synagogues. This synagogue is no longer active, so along the walls of the beit t’fillah (the main room where religious services take place) were glass cases displaying many religious Jewish objects, like Shabbat candlesticks, mezzuzot, and old yellowed prayer books. There were even some curious objects I’d never seen before, including some travel Chanukah menorahs with nine tiny compartments for oil that folded up if you were spending Chanukah on the road, and big, gaudy wedding rings with filigree work and precious stones that would have been owned by the community and loaned out for wedding celebrations. There was also an eerie exhibit on the town’s specific Holocaust history, that felt sparse and empty. 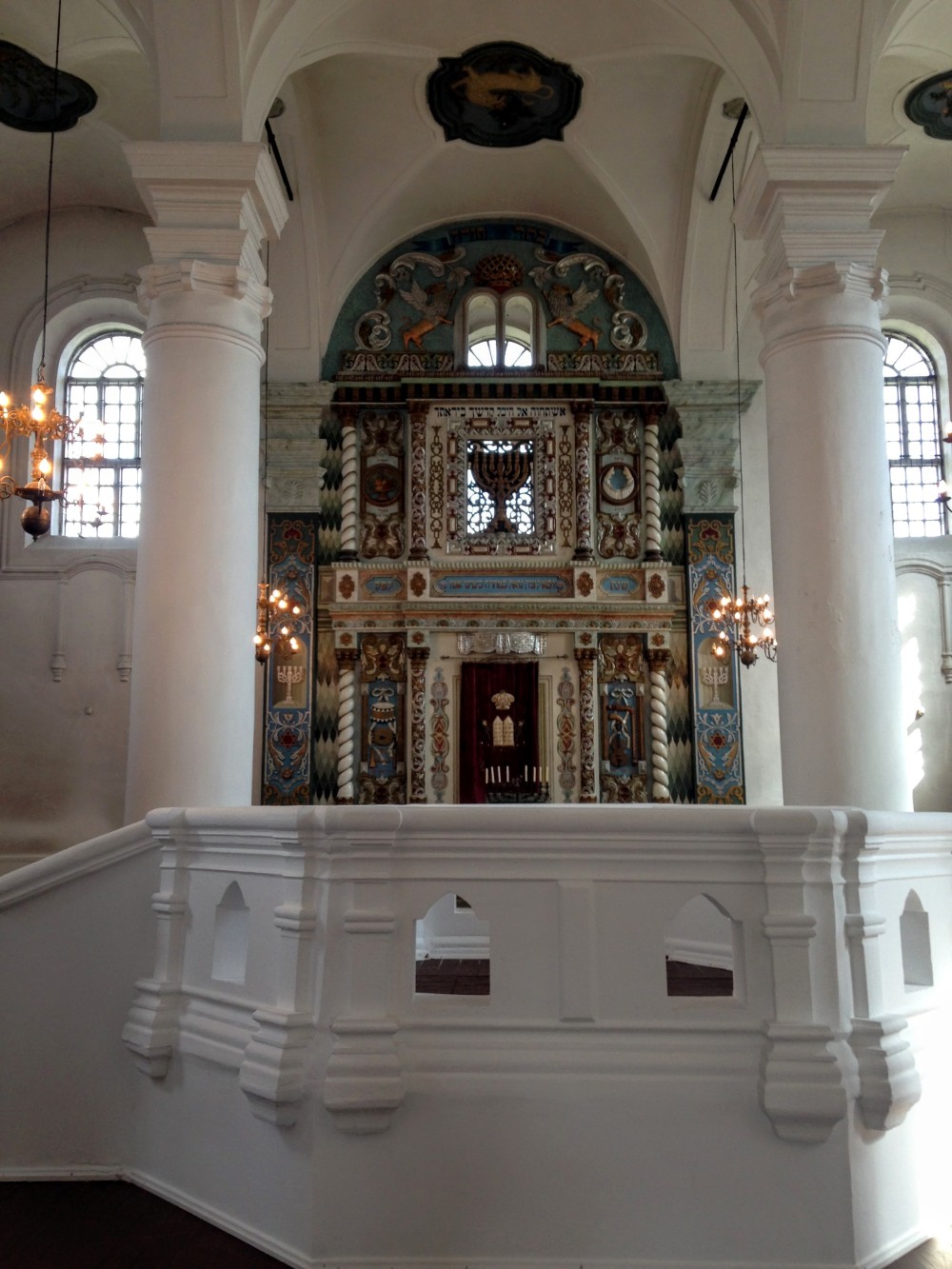 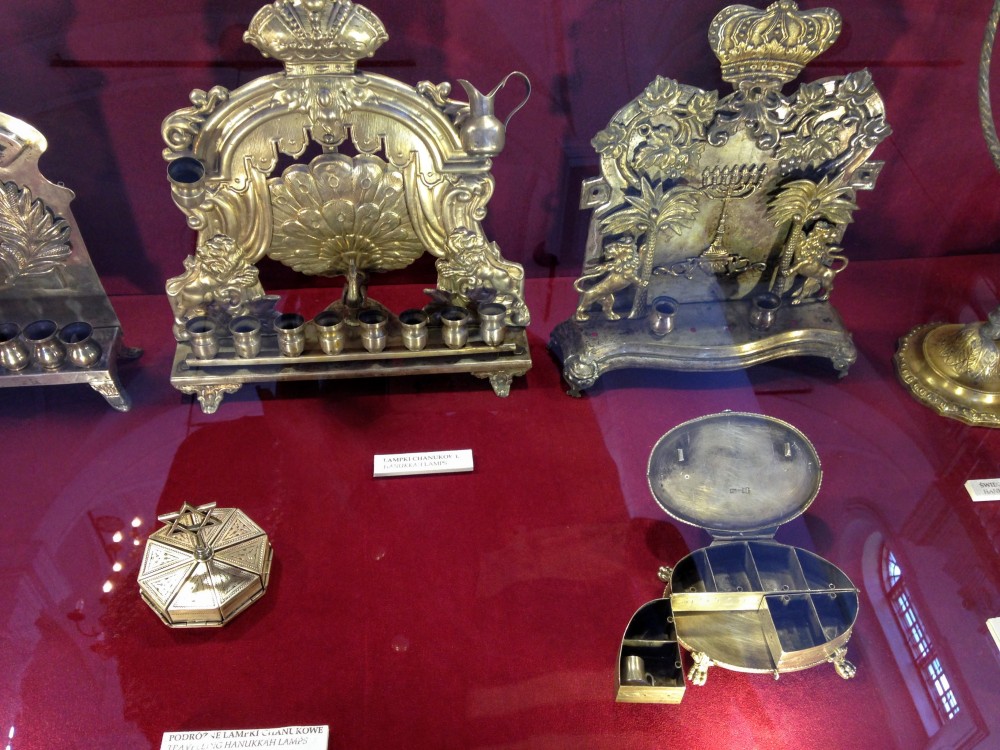 My favorite thing on display at Włodawa’s synagogue were the many old photos documenting the town’s Jewish history, beginning with the building of the synagogue in the 1700’s and continuing through many crusty old portraits of community rabbis, to the photos of the many local groups active in the 20th century, such as Jewish scouts, Zionist groups, and even Yiddish theater companies. These vivid group photos of these bright young things reminded me of my own Jewish family history, and the riotous photos of my fun-loving ancestors at their cousins club meetings. Clearly, there was a vibrant and thriving community here, 60%-70% of the town’s population at the start of the war, that just vanished. And while the town pretends to celebrate it’s diverse religious history, with many statues depicting a Catholic priest, Orthodox priest, and Jewish rabbi together in harmony, there is currently no Jewish life or interest. How can you blame people for not wanting to return? 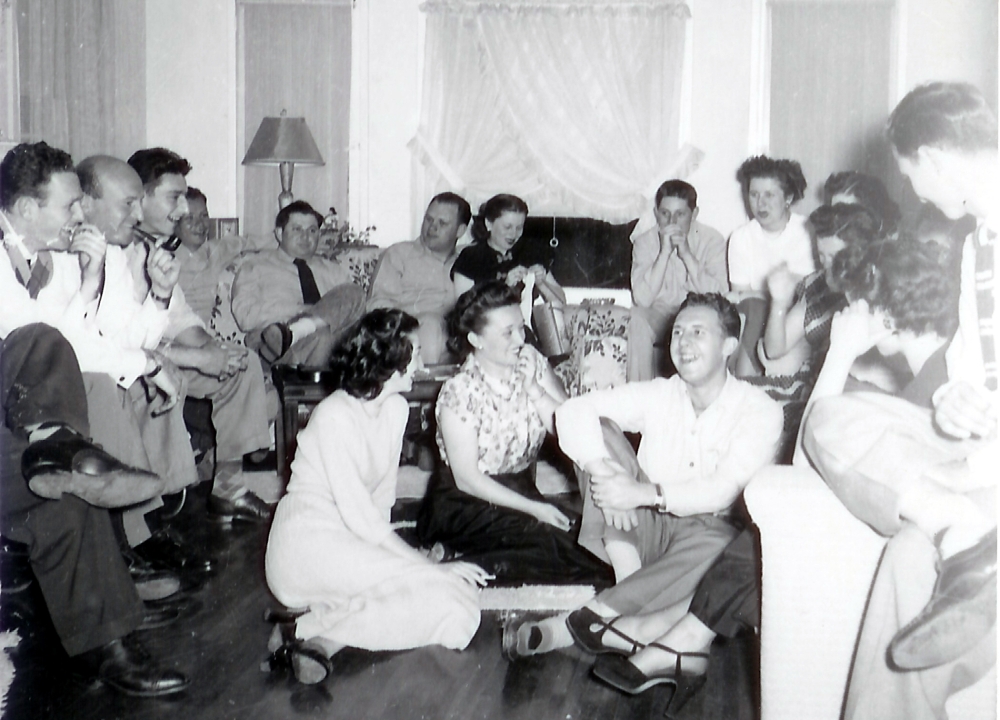 One of my family’s “cousins club” meetings from the 1940’s, an image of what could have been for young Jewish people everywhere

Afterwards, we were famished, and found a strange, dim pizza parlor in a basement. We ordered pizza margarita, thinking this a safe choice. How wrong we were! Apparently in Poland, margarita includes ham, onions, and some mystery vegetables, as well as generous sides of ketchup and ranch dressing. We ate it anyway. At least we are not Orthodox Jews!

When we left the pizza place, it had started to rain, so we had a damp walk back to the bus stop past depressing block housing with metal siding. After the heaviness of the day, I napped on the bus back, with Top 40 pop tunes from the bus’ radio providing the soundtrack to my dreams. 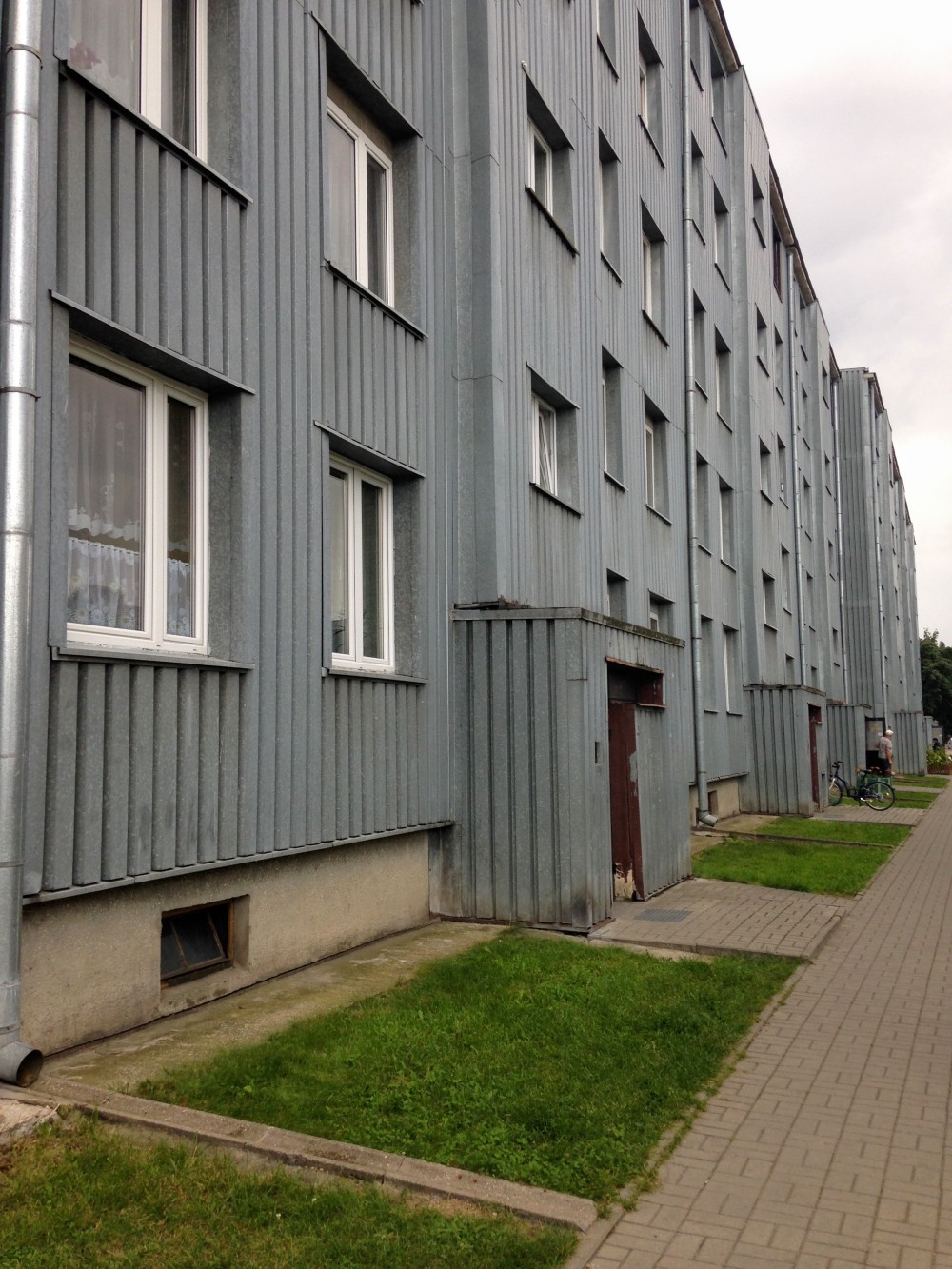 This was the end of our adventures in Poland, but it certainly wasn’t the end of our search for family history. Our quest would take us farther east still, to a field a few hours east of Kiev hunting for a Jewish graveyard in a farmer’s field. . .