After an early Japanese buffet breakfast (think rice, miso soup, and fish, among other things), it was back on the bus for a full day of sightseeing in Tokushima, one of the four prefectures on Shikoku island.

Our first stop was seeing the vine bridges in Iya Valley, over the stunning Iya river. These bridges are famous in the area, but remote and take a while to get to. The journey there was long and twisting, but we passed beautiful stretches of forest, idyllic hidden villages, and various groups of other holiday-makers setting out for kayaking trips on the river.

There are a few different vine bridges in this valley, but their origins are mysterious. What we do know is that to create the bridges, wisteria vines are grown so that they can span the width of the gorge and be woven into bridges with wooden planking. It’s speculated that the bridges originally date to the 1100s, and are currently maintained by local artisans. Some of them (including the one we crossed) are reinforced by wire and side rails, but that doesn’t make them any less thrilling to cross! The wooden planking is set 7 inches apart, so you can clearly see the river rushing four and a half stories below you. I thought it was pretty neat, but this tourist attraction is definitely not for those with a fear of heights.

Our lunch that day was at a famous hotel near the river, and was a simple forest feast with various mushroom salads, grilled and fried root vegetables, and hearty soba noodles. The most delicious culinary surprise was shioyaki, a famous local delicacy. Shioyaki is a small fish that has been threaded on a skewer to look like it is swimming. It is then salted and grilled over charcoal. Squirt a bit of lemon on that bad boy and eat it off the stick like Golem in Lord of the Rings. Eating a whole fish feels a bit odd, and the bones are pretty crunchy, but it was pretty delicious!

Shioyaki. Shot on film.
After more time on the bus, in the afternoon we stopped in Mima for a stroll on Udatsu street, a historic street lined with Edo and Showa era buildings, some dating from the 1700s. It’s a quaint street that truly feels like stepping back in time, with some grand old houses and old-timey shops. I loved photographing the various vintage touches on these shop facades, like old postboxes and signs. It’s a pretty small street, so my friends and I also wandered off the main path to an idyllic stream and fantasized about which of the lofty old houses we would like to live in. 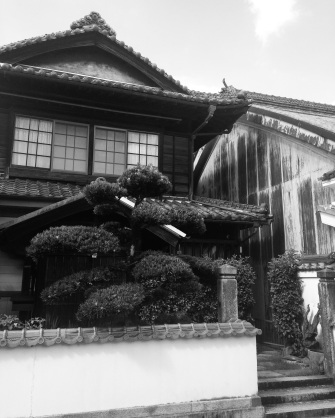 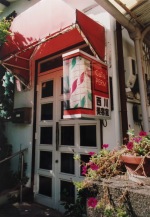 Cut and perm. Shot on film. 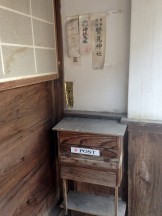 Off the beaten path. Shot on film. 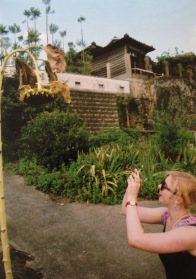 Magical sunflowers. Shot on film.
That evening we arrived in Tokushima for another dance festival, Awa Odori, the largest dance festival in Japan. Unlike the festival in Kochi, we had official seats in bleachers lining the street. You could tell this was a really big deal: everywhere we looked there were dance teams gathering, eating snacks and practicing steps, fanning themselves in the sweltering August heat to keep their makeup from running. We hastily bought some festival food and beer and found our seats.

Dancers and Red Bull girls. Shot on iphone.
The dancing at Awa Odori was a little different than what we had seen the previous night in Kochi. The Kochi festival felt more like a party, with more freedom given to the dance teams with regards to music and dance steps. In contrast, Awa Odori felt more official and organized, more like a parade, and surprisingly all of the teams did more or less the same steps to the same music. It is thought that this particular dance stems from a famous drunken party held in 1586 at the opening of Tokushima castle, and we know that by the 17th century the 3-day festival had been established. Nowadays, it’s quite a spectacle, attracting well over a million tourists each year with countless dance teams representing everything from theater groups to hospitals to cosmetic companies. It was fascinating to watch, but I admit I enjoyed the raucous atmosphere in Kochi more. 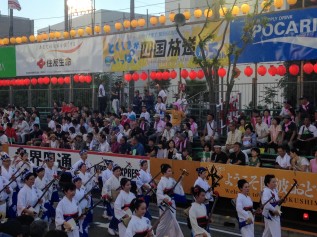 The spectacle. Shot on iphone.
That night, we checked into another standard no-frills Japanese business hotel, and my coworkers and I went to a local izakaya together. Izakayas are traditional Japanese pubs, usually serving a wide menu of skewered meats, fried chicken, sashimi, and veggie sides like edamame and pickled cucumbers with a good selection of alcohol. The best izakayas are no-frills establishments that are open late with friendly servers and chatty locals. I love izakayas. They are simple, everyone can get what they want, and they are a great glimpse into Japanese culture.

It had been a truly remarkable day in Tokushima. While I’m not usually a tour bus person, and Japanese tour buses do come with their own unique set of annoyances (like the hostess who rambles on the microphone forever), I admit it was a great way to see many of the various delights that Tokushima had to offer. We had one day left, and thankfully there was still more magic to come.

*The photos in this post, as in all my posts lately, are a mix of film and iphone photography. Click on the the thumbnails for more information and to see the photos enlarged.