I guess New Year’s is always kind of a big deal, a chance for change, growth, and rebirth. This year it was especially poignant for me, as it marked one year since I’d first moved abroad and started living outside of the US. It also signified the closing of an incredibly momentous, exciting, and turbulent year, and the beginning of a new chapter. I decided to spend it in Osaka.

From the moment I got off the train and stood, dumbfounded and hazy, in the train station, I was in love with the city. Osaka is the third-largest city in Japan, and definitely feels like it, bursting with vibrancy and grittiness. I enjoyed it more and more as I walked around for the next few hours and checked into my hostel.

As I was getting ready to go out for the evening, I chatted with Gill, a jovial Australian girl, and Paul, a strange but nice German fellow currently living in South Korea, and invited them to join me. Together we walked to Dōtonbori, an area packed with restaurants, nightlife, and flashing signs. We were joined by my friend Tim and his friend Mike, a fun Japanese guy who grew up in America. Meanwhile, Paul struck up a conversation with a young Korean guy, and so all 6 of us, two Americans, an Australian, a German, a Japanese guy and a Korean, set off to find a place to eat.

On a quiet side street, we found an izakaya (a traditional Japanese pub) that could squeeze all of us into the back corner. We ordered drinks, skewers of chicken and veggies, and nabe, hot pot that you cook at your table brimming with cabbage, tofu, meat and broth. Next to us were two Japanese women, Yuko and Yuka, who somehow started talking to us and soon all of us were laughing together and learning Korean drinking games from the Korean guy. It was New Year’s Eve, we were in Japan. Clearly there was only one thing left to do: karaoke. So the 8 of us tipsily spilled out into the street to find some.

Mike knew a place, the Drunken Clam, but it was populated by awkward drunk white guys, so Yuka and Yuko took us to a private room karaoke spot. It was more pricey, but it would be just our gang, and fuck it, it was New Year’s Eve. It was so much fun, and the best way to ring in the New Year. Paul made strange German song choices, the Japanese girls had great voices with their J-pop tunes, I nearly killed my voice doing Florence + the Machine, but the hands-down best moment of the night was when we made the Korean guy do Psy’s Gangnam Style. He fucking killed it. It was amazing.

After karaoke, the night definitely gets more hazy, and various members of our group dropped out as it grew closer to morning. Around 4 am, I bid the last folks goodnight and threw my sorry ass into my hostel bunk.

New Year’s Day began very slowly. At some point around noon, through the cloud of my hangover, it dawned on me: I’d made it through my first year abroad. I couldn’t spend the day in the hostel; this special anniversary required something more.

The New Year in Japan is celebrated differently than in Western countries. It is still a time for celebration and partying, as I had done the previous night, but it is also a big time for families to be together and visit their local shrines and temples to make their first offerings of the year. I looked up a few in my guidebook, and ventured out to experience this firsthand.

Around the corner from my hostel was a smaller, 16th century shrine called Ikukunitama Shrine. As I approached, I could hear the sound of drums and chanting. Just inside the doorway was a circle of priests in ceremonial robes, with these strange wooden discs bound by leather straps on their foreheads. In the middle of these priests was a massive fire. Above them was a bunch of the knotted paper fortunes I’d seen at Shinto shrines throughout Japan, blackened by smoke and waving in the breeze created by the fire. [Perhaps insert something about fire rituals or the paper fortunes here] As I watched from the doorway, people kept coming and going, making their offerings. A few of the priests shot quizzical glances in my direction, but kept right on with their chanting. Across the street was another shrine in a beautiful wooded park, but I did not even get close as the line to enter was so long. I was intrigued, and wanted to see more.

I took the subway to Shitennō-Ji, one of the oldest Buddhist temples, and followed the stream of people leading from the subway exit in the direction of the temple. As I was walking, something caught my eye, and I detoured through a Buddhist cemetery that was crowded with headstones.

From there, I made my way to the massive temple complex, which included many sprawling buildings, gardens, and a 5-story pagoda. It was swarming with people, lining up to get into the temples and purchasing talismans such as wooden ema plaques and omikuji paper fortunes. The omikuji were particularly popular. I saw a lot of people reading them and posing with them for pictures before tying them to trees and fences. There was also this one ritual that I found fascinating. There was this recessed pool of water, which two women were tending to with long poles that had metal cups on the ends. People were giving them these long, thin plaques with writing on them, I’m not sure if they were made of wood or paper, and the women would put them in the cups and submerge them in the water while chanting. I’m sure the plaques had prayers on them, but otherwise I have no idea what that was all about.

I still had one more shrine on my list, and for that I took the subway to Umeda, the downtown area of Osaka clustered with skyscrapers, tall and glistening in the fading light of the first day of the year. I quickly stumbled upon it, a tiny, lantern-lit shrine nestled amongst the buildings. Ohatsu Tenjin Shrine was crowded, but was my absolute favorite, as it has a particularly fascinating story. This shrine had been made famous by a Bunraku play about Ohatsu and Tokubei, the Romeo and Juliet of Japanese theater. In the play, they meet cute at the shrine, but she’s a prostitute and he’s the manager of a soy sauce shop, and it can never be. The play was first performed over 300 years ago, and since then the shrine has become immortalized in the Japanese consciousness, and it’s a popular place for couples and young lovers. It was a gorgeous, ethereal place, bustling with tourists taking photos and purchasing eda plaques shaped like hearts or depicting images of Ohatsu and Tokubei.

In a corner of the shrine complex, I found a ceremonial fountain, and performed temizu, the traditional hand purification, using the long metal dipper to wash first my left hand, then my right. I noticed a smaller shrine, set apart from the main one, that didn’t have a long line and had a helpful guide for clueless visitors, with instructions on how to pray at a shinto shrine. I threw a few coins in the wooden box, rang the bell to get the gods’ attention, bowed twice, clapped my hands, and prayed – to my own Jewish god or to whatever shinto gods were present, I’m not sure, but doing so felt so . . . right, so appropriate at that moment. I bowed once more and turned away, whole, renewed, like the phoenix from the ashes, ready to face what lies ahead in my next year abroad. 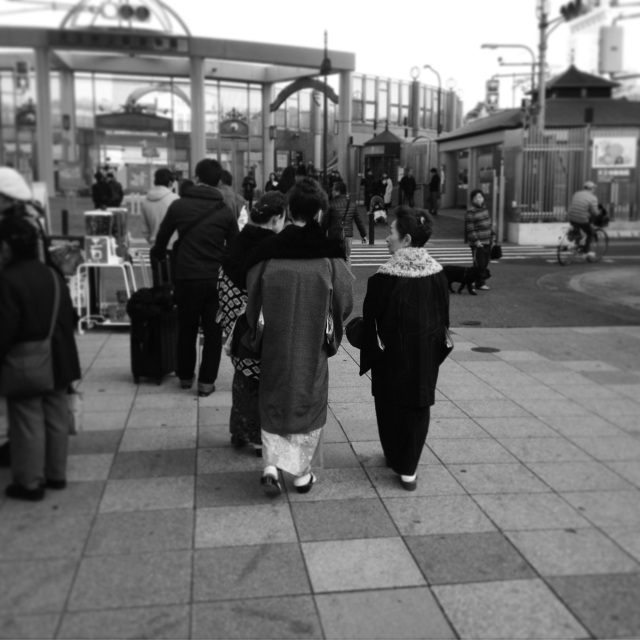