As you may or may not notice, Mo has been absent from blogging as of late.  Very absent.  Months of absence, to be exact.

I’m happy to report that I’m doing fine and in good health.  Actually, this absence was because I was too busy living my life to write about it.  (Or read – sorry fellow bloggers!  I’m trying to catch up on your blogs as well)

Four years ago I graduated from UCLA with a BA in Theater Design with an emphasis in Costume Design.  I worked various retail jobs in LA as well as several shows with theater companies around town and a few student films.  Then to most of my friends’ and family’s surprise  I moved with my boyfriend to San Francisco two years ago.

Although moving from LA to San Francisco with a BA in theater seems like a strange decision, I am 100% glad that I did it.  While the first six months were rough, as a person I have grown in ways I never thought possible.  I’m a pretty independent person, but I’d lived in LA my entire life, and I feel like that comfort was holding me back from realizing my true potential in many ways.

After living in San Francisco for a year, I was acclimated, had friends, but was burnt out on working retail full time.  It was time to seek out what creative career opportunities were afoot.  After a bit of internet searching I came across a listing for an apprenticeship at a local theater company on backstagejobs.com.  I applied and got it!

As an apprentice at the Brava Theater Center in the Mission District, I’ve done a lot of different things, from taking out the trash to grant writing and everything in between.  The theater is an old building from the 1920’s, and requires a lot of upkeep.  When no shows are running, I spend a lot of time with Karla the TD (Technical Director) fixing things and maintaining the building.  When there are shows, I help load-in, tear-down, and run the actual show, whether that means running  lights and sound from the tech booth or just selling concessions at intermission.  When Edris Cooper-Anifwoshe, the marketing director, had her own show in the studio theater, I designed the sound, ran the lights during the show, and did special effects makeup.  I was literally running out of the booth to backstage during intermission to build a massive burn scar on one of the actresses!  It was guerrilla theater at it’s finest.

This apprenticeship has been fantastic for me.  I’ve rebuilt my confidence in theater, especially technically, and been able to acquire tons of new skills.  I can now use a chop saw, a circular saw, and a jig saw.  I never thought I would be so comfortable with power tools!  I’ve also been able to do some writing as well, helping to edit procedures manuals and writing a few grants.  My last grant was actually approved!  Thanks to my hard work, Brava has now won $5,000 to replace the janky old curtains and cyclorama (seamless white backdrop) on the main stage.

But probably the best advantage of this apprenticeship is that I’ve been able to meet and network with so many people in the Bay area theater scene, as well as see tons of performances for free.  In LA, good theater is hard to find.  It’s so spread out, and you are more likely to stumble across a “showcase” of mediocre actors hoping that some agent comes and sees their shit and makes all their Midwestern dreams come true than you are to see a quality piece of theater.  In San Francisco, good art and performance is everywhere, and the community here truly acts like a community.

As I was working with Brava, I began to make friends with Michelle, the administration assistant.  Michelle is also from LA but has spent many years now in San Francisco, working as a costume designer, musician, and in operations roles for different theater companies.  I think that Michelle saw a bit of herself in me, because around September she started swinging tons of work my way.

So far, due to Michelle, I’ve gotten 3 gigs, and all of them paid!  Even though I’ve been out of school for a bit I still find it a novelty that people actually pay me to do creative work.  The first job was with Golden Thread Productions, the bay area’s Middle Eastern theater company, as an assistant stage manager on their new show 444 Days.  While I’d never ASM’d before and it’s not at the top of my list for occupations, I recognized a great opportunity to work with a new company and meet some talented folks.  Luckily I’ve already done enough theater in my lifetime that it was pretty easy to figure out what I was to do as an ASM.  Basically, you assist the stage manager (duh) and do some of the more thankless jobs that need doing, like going on coffee runs and setting up the stage for the show and trying, trying to get those actors to learn their damn lines.  It was an interesting experience.  I’d never worked with a company that was quite so professional before.  It was like I knew how professional theater was supposed to run in theory, but had never experienced it at the tiny broke theaters I’ve worked at in Los Angeles.  And we rehearsed at the Mime Troupe’s headquarters, which in itself was a quintessential San Francisco experience.  The only downside for me was that I’m not sure that the actors lived up to their full potential.  The script was great, by an amazing playwright, and all of the design aspects of the show were nuanced and spot-on.  But some of the performances left something to be desired.  At the end of the day though, it was still a fantastic experience, and I hope to work with Golden Thread again.

Our rehearsal set inside the San Francisco Mime Troupe!

Cast and production team of 444 Days on opening night 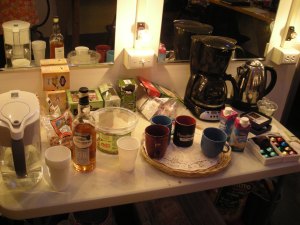 What really happens in the dressing room: coffee, chocolate, and liquor

The second Big Gig was with the African-American Shakespeare Company.  They are a small but established company dedicated to doing “the classics in color”, a mission statement I can definitely get behind.  While interviewing for their spring show, I found out their costumer had just dropped out for their holiday, family-friendly production of Cinderella and would I like the job?  Would I!  I had just over 3 weeks to throw together a musical show on just $300, but I impressed even myself with how good the finished product was.  Luckily, the company does this show every year, so there was a lot of stock pieces for me to use, but a few worn, sad pieces needed major updates.  My favorite creation was a reversible sequined jacket for a Micheal Jackson-style number.  I found a black coat with a gorgeous blue lining for $17 from a thrift shop and spent approximately 10 hours hand-sewing sequins all over it.  A lot of BBC was watched in the making of that coat.  It was a crazy three weeks to be sure, but I’m proud of myself, got real paid, and am already contracted to do the spring show.

Somehow in between the craziness with Cinderella and the encroaching holiday retail madness, I also managed to pull off costuming a kid’s show through my apprenticeship.  The script for Too Many Tamales was pretty mediocre, but the teen actors had a lot of potential and I made them look cute.  I completely pulled that one out of my ass, with zero time and budget, but it still looked great!  Somehow that is the biggest validation for me that this is what I’m meant to do.

Stills I snuck at the publicity photo shoot for Too Many Tamales. It was a very colorful show

Once all of those productions were over, I shifted into high gear to get through the holidays at Sephora.  I did a lot of holiday and New Year’s Eve makeovers, which usually entail glitter.  Lots and lots of glitter.

I’ve been writing this post since the new year, but it’s been hard to get motivated.  With some graduation money, Zac bought a Wii, and we’ve been playing a lot of games and streaming BBC shows.  I’ve been to the beach a few times, taken long walks in Golden Gate Park.  The past few weeks have been filled with lots of vegging and relaxation, and for the first time I don’t feel guilty about doing nothing.  I’ve earned it.

I’m very positive about what the new year, my third in San Francisco, will bring.  I feel as if my career in theater is really starting to go places.  I will also be going many places in the literal sense, and have many travel plans, both big and small.  Right now there is a sense of growing momentum, a calm before (or perhaps between) the storm.  I gotta good feeling about this.

Tomorrow I’m off to Paso Robles, one of my favorite places in California, for a ladies weekend with my mom  and sister.  Wine will surely be drunk, and sunshine and good times will be had.

It feels good to be back.