This post is a continuation of the epic Northern California road trip I took in June with my significant other, Zac.  To read my previous posts, click the links for Day 1, Day 2, Day 3, and Day 4.

We awoke on the fifth day of our trip to a gorgeous view of Mt. Shasta out the tiny mesh window of our tent.  What a great way to wake up!  I wish that could be my morning view every day.  After a camp breakfast of eggs cooked over a campfire, we went on a little adventure to the water at our campground.  I say adventure because to get to the water at McBride Springs Campground one has to walk down a dirt path, then cross a couple boards strewn over ditches to an old-fashioned water pump in a clearing.  This was by far my favorite feature of the campsite.  It made me feel like a hardcore pioneer woman, and the water was cold and pure, straight from Mt. Shasta.

Our view from our tent was kinda like this. . .

Once our dishes were clean and our water bottles filled, we packed up the car and drove up the hill to Bunny Flat to figure out a hiking trail.  At Bunny Flat, we analyzed the map of hiking trails and watched many “serious” hikers, with packs and poles in hand, set out to conquer the mountain.  We like a good hike, but that’s not really us, so rather than attempt Shasta we drove to the base of Black Butte, a neighboring volcanic mountain favored by our Lonely Planet Northern California guidebook.

This is Black Butte. Hells yes, we hiked this muthafucka.

For those wanting to hike Black Butte, I highly recommend looking at a map first.  To get there, one has to traverse a network of unmarked dirt roads.  I also recommend sturdy shoes, as much of the way involves scrambling a rough and rocky trail.  I felt every single rock up the mountain through the thin soles of my cheap Target sneakers, so do be wiser than me.  However, the trail is not as treeless and barren as our guidebook led us to believe.  The first half has a great many trees, which gradually thin out as the path becomes more populated with volcanic rocks until the whole mountain is only a great pile of rocks as you get towards the top.  The views become more and more dramatic as you ascend the butte, and from the top you can see not only Mt. Shasta, but all of the surrounding forests, lakes, roads, and trains snaking along the railroads far below. 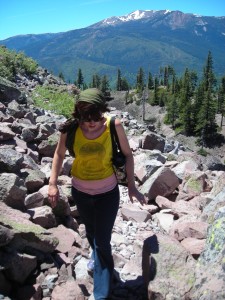 Yes, it was this rocky most of the way!

View from the top of Black Butte

View from the top, you might ask?  Yes readers, I made it.  I made it all the way up and down a volcanic butte wearing cheap sneakers from Target.  It wasn’t easy.  It was hot, I was sweaty, and I was definitely a total brat to Zac and threatened to stop at more than one point.  But once at the top, all was forgotten, and it was completely worth it.  It was an incredible view that made me feel very small indeed, sitting on an enormous pile of volcanic rocks.  Zac crawled to an even higher outcropping and made a cute discovery.  Somehow two tiny chipmunks were all the way at the top of the butte!  We spent a long time on top of Black Butte, photographing the chipmunks and the scenery, before making our way back down. 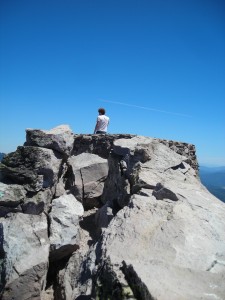 Zac on top of a mountain

How did they get all the way up here?

The descent was much easier, partly because it was downhill, but more so because I was pumped with adrenaline and confident after hiking to the top.  We also had great conversation on the way down.  The way up had been mostly silent, intent upon our goal, but now we were free to have an intricate discussion on Harry Potter and art theory and history.  Once in our car, we checked the time.  The whole hike had taken 4 1/2 – 5 hours.

Zac promised to buy me dinner since he was so proud of me for hiking the Black Butte, so with the promise of food we set off north to Oregon.  With Zac driving and me reading more Harry Potter aloud, we got to Ashland much quicker than expected after only 1 1/2 hours.

Ashland has a really beautiful public park called Lithia Park.  Through it runs Lithia Creek, an icy little stream lined with leafy trees.  People are encouraged to take advantage of the cool water by a series of steps running here and there along the creek. That was definitely my favorite feature of the park.  After our epic hike, we were coated in so much dirt and grime, and eagerly splashed in the creek along with many other families enjoying a Friday evening in Ashland.

We walked around the tiny town center before grabbing a pizza from a popular spot called Martolli’s and taking it back to Lithia Park.  It’s dorky but extremely endearing how much of Ashland centers around the Oregon Shakespeare Festival that takes place there.  So many establishments have references to Shakespeare or his plays.  For instance, our pizza was called the Ariel, and there was also an Othello.  The girl who we ordered from said that the Ariel was her favorite, and I have to agree that it was awesome.  It had pesto, mozzerella, tomatoes, spinach, shitake mushrooms, carmelized onions, and feta cheeze.  Amazing!!!  It was incredibly filling too, and we only ate half and saved the rest for lunch the next day.

When we were stuffed and had been able to relax a bit, we drove the short distance to Adrian’s, another Couchsurfing host that we would be staying with in Ashland.  Adrian is a French engineer who has been in Ashland for 8 months and works for a company that develops electric motorcycles.  It is a passion for him, and is truly following his dream.  He is from Tours in the Loire Valley, which is a smaller French town, and so living in Ashland suits him.

Adrian’s place was in the lower unit of a Victorian house, and during our stay he hadn’t decorated yet because he was waiting to hear if his 3 year visa had been approved.  We hung out for about an hour, talking and getting to know each other, then we finally had the chance to shower and fall asleep on his futon.

Our stay in Ashland was my first time up in Oregon, and I have many more stories to come!  Thanks for sticking with me through my travelin’ tales.  Until next time. . .