I’ve been in San Francisco almost 3 weeks now! And settling in nicely, if I do say so myself.  I’ve been working a ton and really impressing my managers at Sephora.  They’ve been giving me so many hours that I don’t think I’ll need to take a second job, which is awesome.  And I think I’m beginning to make some friends with my coworkers.

I’ve been fitting in well emotionally too.  I always expected a certain amount of homesickness.  For me, moving was voyaging out into new waters, both physically and mentally.  It hit me hard at first.  I have to admit though that for the first couple of days I was pretty bummed.  I think it was both a good and a bad thing that I got to hang out a lot in the last weeks before moving, bad in that it was such a strong contrast when I woke up in a strange neighborhood with a new job and none of the loving people I’d been surrounding myself with.  Poor Zac, I was mopy and cranky so he got all depressed too.  Oh, and it was raining!  But the first Saturday I woke up and just felt really good to be in San Francisco.  The sun was shining, the houses were all cute (I’m a sucker for cute old houses).  I had a great day at work and totally killed it in sales and makeup applications.  And then later that night our good friends Jill and Michael showed up on our door!  They stayed two nights and we had a good time drinking and playing games.  Well, Zac and I drank, Jill and Michael sobered up since they spent their Sunday at a bar watching the 49ers game since the rain prevented them from actually sightseeing.

Besides working, there has been exploration here and there.  Here’s some highlights so far on what we’ve seen and done:

The last day that Jill and Michael were with us in the city was Chinese New Year.  As you can imagine, in our neck of the woods that is a pretty big deal.  So in the afternoon we met up to explore Chinatown.  Zac and I took the light rail downtown.  I love the light rail (I’m also a sucker for efficient public transportation systems, nothing does more to make me feel like a city dweller). We had a great time poking our heads into random tourist shops.  Zac led us off the beaten path into the more authentic parts of Chinatown, down shady alleys with temples and through markets with the most expensive fungus imaginable – $260 per pound!  We had thought there was to be a parade, but apparently that isn’t until Feb. 11, as Chinese New Year is 15 days long.  Ah well, I guess we’ll just have to go back. . .  People were still into celebrating, judging from the bangs of firecrackers and sparklers that were being set off in the alleys.

At the top of Chinatown, you get into an area called North Beach.  North Beach is the Italian part of the city, the district with the Beat poetry culture of the 50’s and 60’s, and also home to a stretch of strip clubs and adult stores with names like The Garden of Eden.  We took a detour up there with Jill and Micheal, and later Zac and went back to City Lights bookstore.  City Lights is a wonderful store, and living history.  They specialize in world literature, the arts, and progressive politics, but are also famous for publishing Allan Ginsberg’s Howl and Other Poems, and the obscenity trials that followed, in 1956.  We spent far longer in there than meant to.  City Lights is one of those places where I could do some serious damage if I had a lot of money.

The Mission has to be one of my favorite districts in San Francisco.  The area takes it’s name from housing Mission San Francisco de Asis, the oldest building in the city.  To understand the mission you need to know only two streets, Mission and Valencia.  Mission street is super Latino, lined with taco shops, cheap groceries with carts of colorful fruits and veggies piled outside, and murals in the alleyways.  Valencia is super artsy and more than a little hipster, with vintage boutiques, vegan restaurants, and my favorite used bookstore, Dog Eared Books.  I love both vibes of the area, although the I’ve recently learned that the hipster gentrification has driven up rent and housing prices and caused the Latino population to drop by 20%.  This saddens me, but I suppose that were it ten or twenty years ago, while I could afford to pay rent in that neighborhood, most of the shops and restaurants I like wouldn’t be there yet.  Like Arizmendi bakery, a worker owned cooperative bakery on Valencia street.  Zac and I shared the most delicious vegan chocolate mint cookie and took home a loaf of sourdough bread for later.

Arizmendi Bakery (this is the 9th Ave location, not the one I'm describing in the Mission) 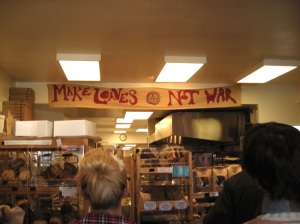 Or Paxton Gate, a shop packed with oddities, curiosities, and a huge collection of taxidermy (!).  Paxton Gate is another place where I could do some serious damage.  So far Zac and I have excercised considerable restraint, only taking home tiny African cactuses (for him) and a tiny flowering bonzai tree (for me). 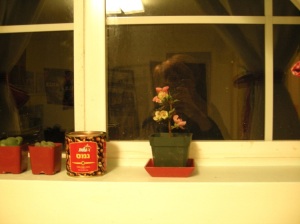 Herbivore is another restaurant nonexistant ten or twenty years ago.  This vegan establishment, complete with arty photos of vegetables on the walls, serves up delicacies that one does not normally find in a vegan joint.  The other day we had the ravioli with “creamy” marinara sauce, but the mac and cheese and lasagna are also outstanding.  We did quite a bit of grocery shopping over on Mission Street as well and made a killing getting all of our fresh produce for the week from a cheap Mexican market. 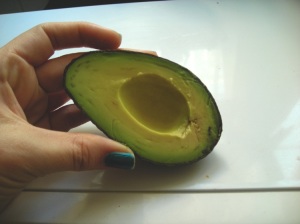 Avocados this big and ripe in January!?!

Also on Mission we discovered a Middle Eastern import shop, the kind that is packed full of crap like coffee pots and incense lighters, and stacks of VHS, cassette, and Beta tapes all in Arabic.  The cutest kitty lives in that shop too.  That’s another thing I’ve noticed about San Francisco, a lot of the foreign markets have cats to catch the mice.

I still have so many more “mini-adventures” to share, but this post is already quite long as it is.  Next time on The Travels of Mo: Golden Gate Park, Irving Street, and Downtown San Francisco!  Stay tuned. . .

PS- I have been taking a lot more photos lately but sadly, in the above adventures I neglected my little Nikon Coolpix and left her at home! All of the above photos were taken at times different from those days.  Since I live just two blocks from the ocean, here’s some gratuitous beach shots instead!